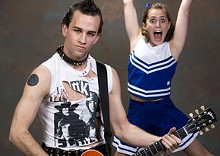 Anything from history is grist for the tireless reimagining/repurposing device that is the pop-culture dream machine. Abraham Lincoln as a vampire slayer -- check. Andrew Jackson as an indie rock star? Huh?! Bloody Bloody Andrew Jackson is proof that no one's immune from radical reformulation. The famously tough, formidable (he wasn't dubbed "Old Hickory" for nothing) seventh president of a young United States, Jackson is renowned for things like his fierce populism, his antipathy toward American Indian concerns and the founding of the Democratic Party. Yet this brash rock musical takes the stuff of Jackson's wild personal and political life and spins it into theatrical high spirits. See Bloody Bloody Andrew Jackson performed by the students of Washington University's Performing Arts Department at 8 p.m. Friday and Saturday, and 2 p.m. Sunday (November 14 through 23). All shows are at the Edison Theatre's A.E. Hotchner Studio Theatre on the Washington University campus (6445 Forsyth Boulevard; 314-935-5858 or www.edisontheatre.wustl.edu); tickets are $10 to $15.
Sundays, 2 p.m.; Fridays, Saturdays, 8 p.m. Starts: Nov. 14. Continues through Nov. 22, 2014