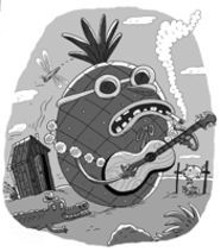 In the annals of fundom, odd couples make for great entertainment: Witness Felix and Oscar, Vladimir and Estragon, and Tom Cruise and Katie Holmes, just to name a few. Add to that list the "Bluau," a blues luau featuring the unlikely pairing of the Hawaiian Polynesian Revue and the Rich McDonough Blues Band -- two opposites sure to attract a delighted audience.

A full-fledged music and dance troupe, the Hawaiian Polynesian Revue is a safe bet to get hips hula-ing with traditional costumes, dynamic drumming and breathtaking fire-and-knife dance (which also keeps the mosquitoes at bay). Meanwhile, the Rich McDonough Blues Band sets moods swinging as it redefines the St. Louis blues by carrying the torch passed on from masters like B.B. King and Earl Hooker while simultaneously blazing a new path, spearheaded by McDonough's slippery bottleneck technique and cast of brilliant players.

The Bluau runs from 6 to 10 p.m. at White Birch Park (1186 Teson Road, Hazelwood) and is a free, family-friendly event. Heaping helpings of barbecue, soda and beer will be available for purchase. And while no outside alcohol is allowed, a special concoction, also dubbed the Bluau, will be making its debut for the adventurous 21-and-older set! Call 314-839-5575 for more information. -- Mark Fischer

Being Me, Being You
It's all right to cry

In the '70s, few who heard all-pro football player and LA Ram Rosie Grier sing "It's All Right to Cry" would ever forget it. This revelation from one of football's most fearsome players was just one of the many highlights of the album-turned-TV special Free to Be....You and Me, conceived by TV's That Girl Marlo Thomas. Now, more than 30 years later, Stages St. Louis offers a new production of the inspirational children's classic in a mid-summer stage matinee. Free to Be....You and Me gets touchy-feely at the Kirkwood Civic Center Theatre (111 South Geyer Road, Kirkwood) at 11 a.m. Wednesday through Sunday (August 3 through 21). Tickets are $14 for adults and $12 for children, with special rates available for groups. Call 314-821-2407 or visit www.stagesstlouis .com for more information. -- Mark Fischer

A Different Student Body
The History of Bowling

Chuck has a problem. Sure, he's a quadriplegic, but he's not letting that hold him back anymore. At age 32, he's finally decided to try new things, so he signed up for a college PE class. In order to pass the class, he has to write a paper, so he's joined forces with Lou, a fellow student. And therein lies Chuck's problem: He wants to be more than classmates with Lou, but his roommate, Cornelius, has the same idea. Who knew gym class could lead to emotional turmoil? The Greenhouse, HotCity Theatre's developmental branch, presents Mike Ervin's "dramedy" The History of Bowling in conjunction with That Uppity Theatre Company's DisAbility Project at the black-box theater at Fontbonne University (6800 Wydown Boulevard; 314-482-9125 or www.hotcitytheatre .org). The curtain goes up at 8 p.m. Friday and Saturday and at 7 p.m. Sunday (August 5 to 14). Tickets are $5 to $12. -- Paul Friswold

Seems Jack White is so busy these days, he's sending out kids to perform as the White Stripes. Well, not really, but the Red Stripes -- the school-age, brother-and- sister White Stripes cover band -- sound enough like the elder Stripes to have been trained by Jack and Meg themselves (Hank III's guitar is pretty spot-on; little Christy sings better than her idol -- big surprise). See the Reds in person at their 9 p.m. all-ages show at Lemmons (5800 Gravois Avenue; 314-481-4812); the cover is $3 to $5. -- Alison Sieloff