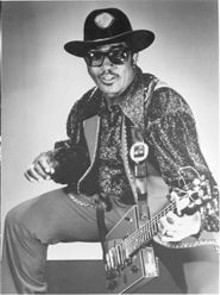 Musicologists categorize the "Bo Diddley beat" as a variation on the clavé, a basic three-two (or two-three) pattern of accents that underlies much Afro-Cuban music. And while Diddley is justifiably famous for popularizing the influential rhythm that bears his name, that's not his only contribution to rock history. His rumbling, Latin-tinged hoodoo defined a distinct musical territory between Chuck Berry's teen-friendly anthems and the murkier, adult blues produced by their 1950s labelmates on Chicago's Chess (and Checker) Records, and his self-designed, rectangular guitars and experiments with special effects prefigured the technological dabbling that began in the psychedelic era and continues today. Remarkably, the Rock and Roll Hall of Fame member still tours at age 77, proving that, among lots of other things, Bo knows longevity.