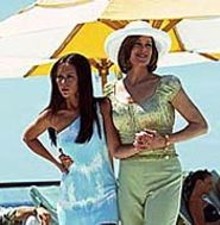 We can run, we can hide, we can even try switching films, but there's just no escaping that pesky Gene Hackman. He starred in The Conversation, he is ubiquitous, and revere him we must -- virtually every single time we go to the movies. (There's even a song by Robyn Hitchcock about this phenomenon, noting that "He's in every film/Sometimes wearing a towel/And if you don't get Gene/You get Andie MacDowell.") Fortunately, much of the time, Hackman is indeed an energetic kick in the pants, and without his game attitude, David Mirkin's Heartbreakers would merely jiggle across the screen and be instantly forgotten.

Of course, it's not Hackman's movie per se -- he's simply here to symbolize the male libido grown old and yucky. For better and often worse, the show belongs to Sigourney Weaver and Jennifer Love Hewitt -- or, more aptly, to their plunging necklines -- as they vamp around, seducing men and lightening their bank accounts. Admittedly, there is potential enjoyment to be had as long as one expects absolutely none of the characters to behave with a shred of common sense. As Mirkin's sophomore effort, however, this stuff feels peculiarly forced, lacking the blithe cutesiness and slick transitions of his first feature, Romy and Michele's High School Reunion.

Weaver plays Max, a deft con-woman who has amassed a small fortune marrying outrageously stupid men, luring them into compromising positions, then collecting her settlement en route to her next victim. As her lawyer (Carrie Fisher, in a cameo) craftily presents it, Max has "suffered horrible damage to her psyche ... oh, and she keeps the Mercedes." Her quarry in this case is the horny chop-shop mobster Dean (Ray Liotta), who must have had his brains eaten to fall for Max's celibate ploy all the way to their bridal suite, where she teases him to the brink of madness and then swiftly feigns unconsciousness. Possibly because of his New Jersey heritage (the script's only explanation), the sweet thug buys this act hook, line and sinker, setting up the sort of logic we're forced to swallow for the rest of the movie.

After the unjustly duped Dean is established and set aside for the film's framing device (which copiously overstays its welcome in the third act), we are properly introduced to the saucy tart who sold him down the river. It turns out that his assistant at the garage -- who's prone to crouching suggestively and inadvertently riding his lap -- is, in fact, Max's sullen daughter, Page (Love Hewitt). As her mom's partner-in-crime, Page has learned the arts of the push-up bra and the quick fleece. But while Max tries to protect her charge from the dangers of love ("He'll pull a conceive-and-leave, and then it's my life all over again"), Page aches to quit the crooked life. To illustrate her dedication to a more wholesome path, she flounces around in a foul mood with her boobs hanging out. It's good to have a skill.

Once the film's weird tone is set -- basically ballsy feminism meets Russ Meyer, which is every bit as jarring as it sounds -- Max convinces Page to join her on one final scam, and off to Florida they go. In essence, what unfolds is a shapely take on Dirty Rotten Scoundrels, but instead of heading to the Riviera with zany guys, we head to Palm Beach with grouchy gals. The goal: to catch one last big fish together and make off with everything that isn't nailed down. Enter Hackman as the boorish billionaire tobacco mogul William B. Tensy, a lusty chain-smoker teetering on his last three legs -- in short, the perfect target.

Heartbreakers is a fairly scattershot offering, which means there's probably at least one trick in the bag to amuse just about anyone. Occasionally the dialogue crackles ("I am not feeling your butt again, Mother -- we all know how wonderful it is!"), and when it doesn't, there's always a dick joke waiting in the wings. But the script -- by Robert Dunn, Paul Guay and Stephen Mazur -- bears the scars of development hell, amounting mostly to a joyless, soulless romp. It also doesn't help that Weaver and Love Hewitt possess all the spark and comedic timing of borscht.

Speaking of borscht, there is some fun in Weaver's enthusiastic Russian accent, which figures into her seduction of the decrepit curmudgeon. In one of the movie's best scenes, the vegetarian Max struggles to maintain her scam in a swank Russian supper club, accidentally ordering steak tartare while enduring the single-entendres of a clever waiter. The movie hits a peak when she's called to the stage and guides the chamber orchestra into an impromptu karaoke adventure.

If only there were more of such moments, but Mirkin -- who honed his chops writing for the complex and challenging television series Three's Company -- seems content to vacillate between obvious stabs at mother-daughter angst and cheesy sex gags. In theory, this could hold appeal, but Love Hewitt's character is merely rude, charmless and unlikable, whereas Weaver seems to be competing in the Streisand Olympics of Awkward Vanity. (If this observation dismays the actress formerly known as Susan, her paycheck for the next Alien sequel should provide adequate comfort.) After a while, one is inclined to suggest that the two simply get -- oh, let's see -- over themselves?

The supporting cast makes the most of what's available. Hackman snags some of the best lines ("There is nothing sexier than smoke billowing proudly out of a woman's hot ... red ... engorged ... nostrils"), and Liotta is particularly funny when enraged. As Hewitt's love interest, Jason Lee (Chasing Amy) manages the difficult feat of being patient, congenial, witty and wise while receiving no such qualities in return. Again, utter nonsense, but his astronomer-barman affords the story some sense of gravity. Anne Bancroft, SNL's Kevin Nealon and Tim Burton regular Jeffrey Jones also show up briefly to jerk and be jerked around.

Essentially, Heartbreakers' implausible level of comedy just grows tedious; it's neither smartly witty (like Nurse Betty's delusions) nor full-throttle absurd (like, say, semen as hair gel). This bust-out premise should have racked up bountiful titters, but -- despite vague nips of cleverness -- we're merely smothered in the bosom of ennui.

Jump to comments
« Variation (Barely) on a Theme   |   Fortunate Son »