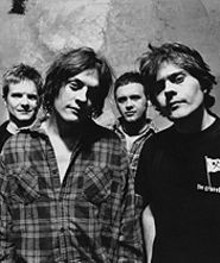 The South by Southwest Music Conference, which was held last month in Austin, Texas, isn't as concerned as it once was with getting new acts signed or producing breakout bands. These days, it's more about schmoozing at parties thrown by magazines and dot-coms, eating all the barbecue and Tex-Mex you can hold and launching new projects by established stars (this year's model featured high-profile performances by Patti Smith, Steve Earle and Led Zeppelin's John Paul Jones.

It's still possible to discover great bands at the conference, though, even though they may not be brand-spanking-new. To paraphrase the NBC slogan hyping repeats, if you haven't heard 'em, they're new to you.

This year, the best pure rock & roll band in the house was Marah, a South Philadelphia band led by the brothers Bielanko, Dave and Serge, who capture a vibe somewhere between the Replacements' legendary sloppiness, the sweeping grandeur of Bruce Springsteen's early albums, Tom Waits' patented weirdness and Steve Earle's eye for gritty detail. It's easy to play spot-the-influence with the group, but their songs, particularly those on their just-released sophomore album, Kids in Philly -- are so good, they're more than just the sum of their sources of inspiration.

"I think all the guys in our band see things on the same level -- we've got common goals, and everybody who works with the band seems to be doing a great job. We're just as happy as could be," says Dave Bielanko, seated behind a conference table in a corner of the Austin Convention Center.

The younger Bielanko founded the group in 1993 as a trio but was eventually joined by Serge, who was blown away by one of Marah's shows and realized he couldn't stay away. "We were already playing his songs without his permission, anyway," says Dave with a laugh.

In 1997, the group (which also included drummer Ronnie Vance and bassist Danny Metz) set up their primitive recording equipment -- an eight-track machine with one of the channels out -- above a garage and recorded the ragged-but-right Let's Cut the Crap and Hook Up Later On Tonight. Certainly one of the great titles in the annals of rock history, Dave says it was inspired, as is their music, by their South Philly surroundings: "The whole idea of that name is that it's meant to be said in the voice of a Philly mobster -- it's such a wise-ass thing to say."

"It has different connotations," adds Serge. "It was a record that was made after work every night. We'd get together at 6 or 6:30 and go till 11, so it has something to do with that. Also, it's probably one of the worst bar lines you could ever come up with. The combination of all that worked for us."

The album, released on the Black Dog label, owned by Cary Hudson of Mississippi band Blue Mountain, garnered some critical attention for Marah but precious little in the way of sales.

For Kids in Philly, the band became the second act signed to Earle's E-Squared label, after Earle himself. Not much was changed in their methods of recording the album, though Dave does allow that Earle's involvement did allow for a few equipment upgrades. Like Cut the Crap, though, it was recorded in the upstairs space at Frank's Auto.

"It's Mob country, deep South Philly," Serge says. "Frank is very cool to us. He loves the band. He sees us in the paper and stuff, and he thinks we're gonna be huge. We have to constantly tell him that, look, we're not huge and please don't raise our rent. He's down there working while we're recording, and so far the noise hasn't interfered or anything, so it's cool."

One of the factors that separates Marah from the rest of the alt-rock pack is their use of such instruments as xylophone, vibes, chimes and banjo, things not heard on typical rock & roll albums.

"The banjo is a Philly thing," Dave says. "It's a Mummers thing, from the Mummers Parade on New Year's Day."

"There are Mummers clubs all over South Philly," Serge says, finishing the thought. "It's an old institution started by the Germans, I think, back in the 1850s or something. What it is now is a New Year's Day parade. All these different clubs march down Broad Street or Market Street and they play the banjo."

"The chimes are a Phil Spector thing," Dave continues. "Phil Spector, 'Born to Run' -- those are the kinds of things we like to listen to. If you can even do a minor-league version of what those people have done, you've accomplished something. Rock & roll doesn't have to be limited to guitar, bass and drums. It doesn't have to be like that to be good."

The album is full of songs with sharply rendered lyrics, such as "Point Breeze," which takes its name from a Philly neighborhood; "Christian Street" (which features a cameo by legendary Philly deejay Hy Lit); and the grim murder ballads "History of Where Someone Has Been Killed" and "It's Only Money, Tyrone." There's also "Roundeye Blues," the story of a war vet suffering post-Vietnam stress syndrome, and "The Catfisherman," a song about inner-city anglers.

"That's a true story, man," Serge says of the last tune. "That's a perfect case of life imitating art. I wrote the song first; then within two weeks we found this place -- we're big fisherman, but we have to travel to fish, 'cause there's not too many places to go in the city. But the Delaware River runs right through it, and we found a pier right on the river that you can catch catfish from. It's right by a major highway in the city. There are nightclubs and a Wal-Mart right there. And there are all kinds of Vietnamese people and black people and Hispanic people fishing. You can't necessarily speak everyone's language, but everybody gets along. Everybody's there for one reason -- to fish for catfish. It's a cool thing that brings everybody together."

The brothers do not, however, have a buddy who once caught a human head, as the song reports.

"Not yet, anyway" Dave says.

Marah opens for Gov't Mule at Mississippi Nights on April 8.

Jump to comments
« Yo La Tengo with Quickspace   |   Gutting the Beat »