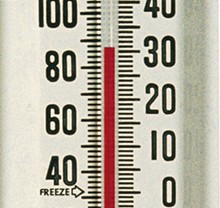 Click here to return to the rest of the RFT Summer Guide.

Who needs the Digital Storm Tracker PanicBot 9000? Sure, it's got those wicked squiggles representing tornadoes and the ominous flashing lightning bolts, but for all its technology, it just reinforces what all of us who live in St. Louis already know: The summer gets hot — really stinking hot — for a handful of months. And then it storms like mad. Repeat.

So whether you're the type who takes it in stride when it's nine o'clock at night and sweat's running down your shins, or if you prefer hiding in front of a fan in your air-conditioned basement while researching a summer sabbatical to Siberia, here's a list of places where you can embrace — or escape — the St. Louis summer heat during an "average" June day when the high temperature registers around 86 degrees.

86 degrees June's average daily temperature in St. Louis is 86 degrees, but it usually feels hotter than that — even hotter than the heat index suggests. There's a complex formula meteorologists use to calculate the number, but here's why you feel so hot and bothered: The heat index is calculated in the shade, not in full sun. Happy roasting!  82 degrees Butterflies' kaleidoscopic wings seem to open and close with the breeze, leaving oohs and ahhs in their beautiful wake. But it's not as easy as it looks — these peacocks of the insect world are cold-blooded. If it's too cold in their environment, they aren't going anywhere. Which is understandable: How motivated are you to do stuff when it's chilly? So the Butterfly House (15193 Olive Boulevard, Chesterfield; 636-530-0076 or www.butterflyhouse.org) conservatory is kept right around 82 degrees (though it creeps higher in the summer) with 75 percent humidity, so the 80 species of butterflies that call it home are warmed up, limber and ready for liftoff. 79 degrees If June's average daily high temperature of 86 degrees leaves you looking for relief — however slight — you can at least head out to Chesterfield Valley where, according to KMOV (Channel 4) meteorologist Steve Templeton, temperatures can drop to 7 degrees cooler than where the temp's recorded at Lambert Field. Or catch a flight out of Chesterfield's Spirit of St. Louis Airport (18270 Edison Avenue, Chesterfield; 636-532-2222 or www.spiritairport.com) and head toward Stanley, Idaho, a teensy town that frequently has the coldest temperatures in the lower 48 states during the summer. 58 degrees It's less colorful than the Puke State, but more interesting than the Show-Me State: Did you know Missouri's also known as the Cave State? Follow those ubiquitous billboards advertising Meramec Caverns (573-468-2283 or www.americascave.com) for about an hour west down Highway 44, and you'll wind up in Stanton, home of Missouri's most famous (or at least most advertised) caves. For years now, the commercials — over the sweet strands of the Moody Blues' "Your Wildest Dreams" — have reminded us that the caves are a cool 58 degrees all year long. Tours cost $9.50 to $19 and last an hour and twenty minutes. 55 degrees Ah, public pools: shrieking kids, Band-Aids floating alongside you in the lazy river, skillet-hot pavement that leads to lukewarm water. If your idea of a relaxing swim involves a little less concrete and a little more nature, take a dip in the Current River. Sure, it's about a three-hour trip south of St. Louis, but it's also fed by the aptly named Big Spring, which is one of the nation's largest. Some 286 million gallons of chlorine-free water flow through it daily, and its temperature hovers just under 60 degrees. Note that many springs themselves are off-limits for swimming, so visit www.nps.gov/ozar for more details. 51 degrees Rather than flying off somewhere cool, you could just head straight up in the warm summer air for a skydiving excursion. For every 1,000 feet the plane climbs, the temperature drops about 2.5 degrees. So by the time you reach an altitude of 13,000 feet and prepare to take the plunge, it'll be a refreshing 51 degrees — for a few seconds, anyway. There are plenty of companies in the region for new jumpers and old pros alike: Contact Archway Skydiving (1-800-283-5867 or www.archwayskydiving.com) or Mid-America Sport Parachute Club (217-824-5867 or www.skydivetaylorville.org). 45 degrees Penguins and puffins are so genteel, suited up as they are in their black and white bests, waiting to welcome visitors to their home at the Penguin & Puffin Coast in Forest Park. The birds featured in this Saint Louis Zoo (One Government Drive; 314-781-0900 or www.stlzoo.org) exhibit are native to chilly locales including Russia, South America and Asia, so the exhibit's temp is always kept at a feels-like-home 45 degrees. Waiting for your visit: King and Rockhopper penguins, as well as horned and tufted puffins. 15 degrees If the thought of donning a parka in the summer makes you sweat, then you haven't yet made it to Shiver Vodka Bar & Champagne Lounge (1130 Washington Avenue; 314-241-3900 or www.shivervodkabar.com). This Washington Avenue hot, er, cold spot boasts an ice chamber and will outfit you with a bulky coat, gloves and two you-call-it vodka drinks. It's a downright frigid 15 degrees in there, but the space is yours for $20 — not bad for a half-hour respite from the broiling night that awaits once you exit the igloo.