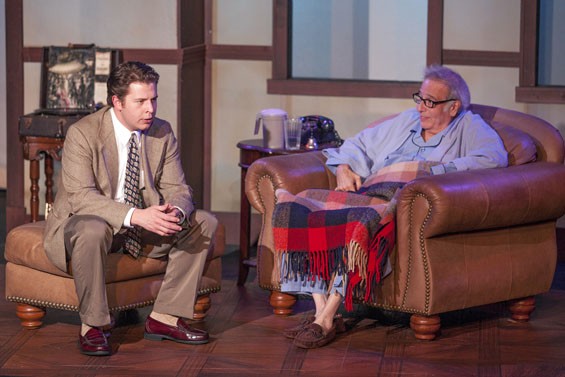 Aaron Orion Baker and Bobby Miller in Tuesdays with Morrie.

Tuesdays with Morrie
Through November 17 at Chesterfield Mall (space 291, next to Sears and Houlihan's).
Tickets are $22 to $25.
Visit www.dramaticlicenseproductions.com.

Let the sniffling begin. The impishly irrepressible yet sagelike Morrie Schwartz is back among the living, primed to die again. Since his actual death in 1995 at age 78 of Lou Gehrig's disease, Schwartz has been resurrected on stage and screen, not to mention the printed page. The celestial sales for Tuesdays with Morrie have catapulted Mitch Albom's 1997 book into the lofty niche only accorded such rarefied bestsellers as Jonathan Livingston Seagull, Love Story, The Bridges of Madison County and The Christmas Box. Dramatic License Productions is responsible for Morrie's current incarnation. At the performance I attended, the tears flowed freely, both onstage and in the audience.

And why not? This production is slickly mounted. Bobby Miller is practically typecast as the endearingly elfish title character. Aaron Orion Baker is appropriately sincere as Mitch Albom, Morrie's former student and current Boswell. Perhaps because the script is so slight, Tuesdays with Morrie performs more effectively in this smaller, more constricted playing space than it did when it was produced on the more capacious Rep stage five years ago. Director John Contini provides a watchful eye over the proceedings. He establishes a calibrated pace over the longest death scene since Marguerite's in Camille. (If you prefer a more recent reference, Morrie takes longer to die than did Robert Duvall when he expired as Stonewall Jackson in Gods and Generals.) Contini confronts the play's maudlin qualities head-on; he allows Max Parrilla's lights to bathe the set in bold colors that add to the bathos.

Many people love this type of unabashed sentiment. When Tuesdays with Morrie premiered off-Broadway in 2002, New York magazine's unusually acerbic critic John Simon praised the piece as "heartbreakingly true...a play that might change your life." If your life needs a change, this might be the show (and the book and the TV movie) for you.

On the other hand, a more reserved point of view might suggest that while Morrie's aphorisms are lovely and sweet, they are hardly original. We're told, for instance, that death ends a life, not a relationship. And that's often true. But it was also true in 1968 when Robert Anderson wrote essentially the same line ("Death ends a life, but it does not end a relationship") at the outset of his play I Never Sang for My Father. Maybe every generation needs to hear these thoughts ("money is the root of evil," "love is better than hate") anew. But they needn't be palmed off as original or even particularly profound. As presented here, most of Morrie's sentiments are about as insightful as a homily on a Hallmark card. The real Morrie was a sociology professor at Brandeis, so he surely had some depth to him; this script (by Jeffrey Hatcher and Albom) reduces him to a kibitzer who might enjoy trading quips with Bill Maher.

But perhaps the play's biggest flaw is its depiction of Albom, the former-student-turned-sports-writer who has returned for weekly visits with his dying teacher sixteen years after graduation. Not only does Albom serve as Morrie's coauthor and one of the two roles in the play, he is more importantly the play's editor — a job that guarantees that Albom's namesake character is as white-washed as Tom Sawyer's fence. As depicted here, Albom has just enough generic flaws — jealousy, arrogance — to justify Morrie's words of wisdom, yet not enough problems to become a nuanced or difficult character. What are Albom's ulterior motives here? The moment this ambitious journalist arrives at Morrie's home with a tape recorder in tow, doesn't "book deal" hang over these Tuesday sessions like a neon sign?

Any reservations about the piece do not extend to its title character. I'm sure that Professor Schwarz was an inspiration to his students. If we're lucky, we have Morries of our own. We are all of us shaped by remarkable teachers or wizened grandparents. Not that we tape record their every utterance — though perhaps we should. We're told that Morrie wanted his epitaph to be "A teacher to the last," and Albom would have us believe that he was. Now that he has been reincarnated as a lovable mensch, the stage is his classroom, and Morrie has become the gift that keeps on giving.

Editor's Note: Riverfront Times has an immediate need for a freelance writer to pen weekly theater reviews for the print and online editions of the RFT and coordinate our performing arts coverage. Interested candidates should email a resume and clips (subject line: "theater critic") to [email protected].

Jump to comments
« Scary Good: Slightly Askew's The Woman in Black is a fright-fest not to be missed   |   All Is Bright: War makes for a hell of a Christmas story in Mustard Seed's All Is Calm »