We find a bear who can drink more than we can and learn how to be PC with our pets; plus, Unreal falls prey to taco terrorism 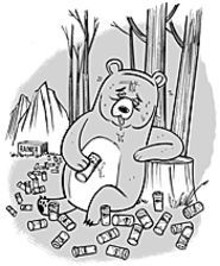 As if last week's Associated Press report that a black bear in Washington state consumed "about 36 cans of Rainier" before passing out in a tree wasn't wacky enough, consider this detail: The beast, a Baker Lake resident, broke into some party-animal campers' coolers and "drank the Rainier and wouldn't drink the Busch beer." Wildlife officials trapped the bear the next day via a picnic spread of doughnuts, honey and, of course, two open cans of Rainier, a once-great Washington-state ale whose old, banana-yellow downtown Seattle brewery now serves as world headquarters for Tully's Coffee.

Anheuser-Busch did not return calls seeking comment, but San Antonio-based Rainier brand manager Neal Stewart, whose Pabst Brewing Company has resuscitated such "nostalgia brands" as Stag and Falstaff, was more than happy to discuss the situation with a Seattle-bred Unreal correspondent who can relate to what it feels like to consume 36 cans of Rainier in one sitting and pass out in the wilds.

Unreal: Have you heard the one about the lushy Rainier bear?

Neal Stewart: Yeah, it's been bear crazy around here.

How do you explain Rainier's success marketing to bears?

Because he was in a mountain resort area -- the famous phrase of Rainier is "Mountain Fresh Taste Since 1878." He was a mountain bear, so he liked mountain beer.

Why didn't he even crack the Busch?

I think he did crack one of 'em, but he enjoyed the Rainier a little bit more, so he drank 36 of them.

What sort of hangover cure did the bear use to rally the next morning?

He crawled up in a tree and slept for four hours. When he was ready to get after it again, they tried to lure him with doughnuts and honey. Then they put out two cans of Rainier, and he was humanely trapped.

Do you plan on using this bear in upcoming commercials?

Yeah, the thought has come up. We're actually having a bear-naming contest on our Web site, www.rememberrainier.com [Unreal's submission: "Charles Bearkowski"]. We'll give the winner a hooded sweatshirt or something like that.

What are they doing with this bear?

They relocated him to a safer area.

What's the answer for Anheuser-Busch?

It might be a steep challenge for them. I don't know what A-B will do for their bear marketing campaign in 2005.

Busch is synonymous with stock-car racing. So why not have a "bears get in free" day at Talladega?

They could do that, but I think bears are more interested in taste and quality. And obviously, this bear preferred the mountain-fresh taste of Rainier.

St. Louis joined the ranks of a handful of progressive cities like San Francisco, Hollywood and Boulder when Mayor Francis Slay signed into law a bill that changes the city's pet ordinances. No longer can people rightfully call themselves "pet owners." Nope, now the proper term is "pet owner/guardian."

Indeed, it must have been a mighty slow week down at City Hall.

The name change was heralded as a victory for the duo of Quentin, the famed pooch who last year survived the city pound's gas chamber, and Quentin's owner/guardian, Randy Grim, the founder of Stray Rescue of St. Louis.

Grim's mission, and that of animal-rights activists nationwide, is to make animal keepers more responsible for the livelihood of their pets by referring to them as guardians. To this, Unreal says, "Un-fucking-real."

"We want to change people's mindsets," says Grim, speaking on behalf of Quentin. "Right now someone can come into your yard and steal your lawnmower and your dog, and under the law it's viewed as the same crime. But for many of us, our pets are part of the family."

The draconian change in the city ordinance completes a yearlong dogfight for Quentin and Grim, who say they initially received some resistance from members of the City of St. Louis Board of Aldermen, who questioned the bill's intent. Detractors of similar ordinances passed elsewhere have worried that the legal distinction between a "pet owner" and "pet guardian" could usher in a host of frivolous lawsuits in which pets sue their guardians for slavery (in the case of service dogs) or sexual assault (in the event a pet was spayed or neutered without its consent).

In a compromise, the city threw Quentin and Grim a bone when it agreed to include the term "guardian" alongside that of "owner." What's more, the name change seems to have more bark than bite -- at least for now.

"Legally the change has no impact on the liabilities and responsibilities of a pet guardian," confesses Grim. "But we imagine this as a stepping stone for greater rights for pets."

In the meantime Grim, a 42-year-old bachelor, lets it be known that he has long been a guardian and a servant to his four dogs, no matter the sacrifice.

"My four dogs have always ruled the roost. Heck, they even sleep in my bed."

My God, Unreal wonders, what have we become?

To all the skeptics who enjoyed a hearty chuckle some six months ago when Unreal plucked down an additional ten dollars per month to purchase comprehensive-theft coverage on our vintage gray 1987 Buick Electra T-Type -- that of Pimpwrapped, sexy-Real-World-alum-on-the-hood fame -- well, the joke's on you.

Sometime between 10 a.m. on July 29 and midnight on August 8, the vacationing Unreal's Buick vanished from a parking stall behind the Meat Street Foundry in Soulard. A few days later, Unreal received a phone call from Officer John "Vito" Parisi of the Sauget Police Department, saying that the car had been severely damaged and impounded -- and that a likely suspect had been identified. Parisi's plan? Set a trap for the metro-east resident, using money the suspect had left behind while on a late-night joyride in the stolen Electra.

"We pulled him over for running a stop sign or something; he didn't have a valid license -- so we brought him in and he made bond," reports Parisi, who booked the suspect before Unreal reported the vehicle stolen. "The rear three windows were busted out. There were tools scattered all throughout the interior. The back seat was just torn to shit. I went by his house and spoke with a guy who says he was the stepfather. He says he doesn't live there but checks in now and again. I told [the suspect's stepdad] to have him swing by and pick up an envelope with $56 in it."

By virtue of the prescient expanded-coverage purchase, Unreal is currently rolling in a stylish silver Hyundai (with a CD player!) rental car that we had the pleasure of red-lining to the Lake of the Ozarks this past weekend, and we have a line on a 1990 Buick Century currently being moored in Granite City.

Meanwhile Unreal's second car, a 1995 Honda Accord, was ghoulishly transformed last week into a Mexican-buffet-on-wheels. We had parked on a woodsy street in Webster Groves, and some taco-toting hoodlum decided to unburden himself of a small boatload of slop -- we're talking the whole enchilada. The guys down at Auto Beauty Specialists on Lockwood Avenue actually blanched as they gazed at the drippy, festering mess that was plastered throughout Unreal's entire interior. It took them the whole day to undo the south-of-the-border devastation.

Unfortunately, Unreal's insurance policy does not cover refried-bean damages. Hence, it is far more enjoyable and cost effective to have one's car stolen than tacoed, provided the owner has the foresight to purchase comprehensive on a mid-'80s classic-to-be. And here's a tip, teen vandals: Go buy a dozen eggs instead of a dozen tacos next time, and focus on your vehicular targets' exteriors. Less trouble all around, kids -- and ain't nothin' more perversely satisfying than the crack of an egg on a brand new Hummer. Take it from us. We've been there, done that. Splat.