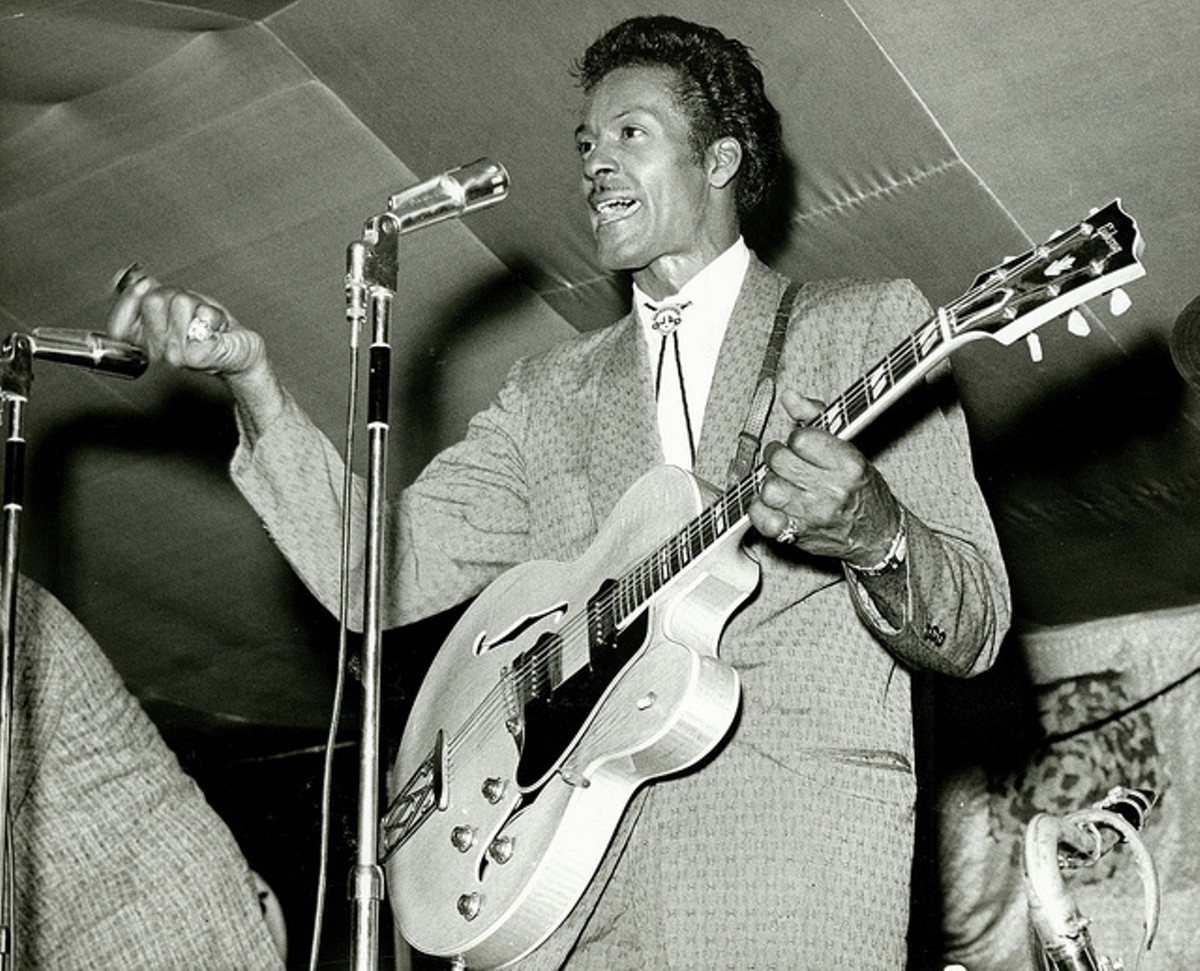 The philosopher Theodore Anthony Nugent once observed, "If you don't know every Chuck Berry lick, you can't play rock guitar." The Nuge was somewhat overstating matters, but it is no hyperbole to say that any rock & roller who doesn't get what Chuck Berry has done doesn't get much of anything. And guitar licks are just the start of the man's genius.

Chuck Berry will turn 90 on October 18. He's still with us, living right here in St. Louis. He may never take the stage of the Blueberry Hill Duck Room again; he doesn't have to. Put on any of his greatest songs — "Nadine," "Johnny B. Goode," "Around and Around," "School Day" — close your eyes, turn it up, and it's all there. The strut, the joust, the goof, the groove, the cool, the absolute joy of what it's like to be in the rock & roll moment. In a great Chuck Berry song, life really does come alive.

A top ten list of Chuck's most rock & roll moments isn't enough, but neither is 10,000. So happy birthday, Chuck. We couldn't have rocked without you.

"Maybellene" is often called the first true rock & roll song. If it is, it's that beat, that urgency, that instinctive rhythmic play of words — everything in full gear rushing forward — that sets it apart from other outstanding records from that great year of 1955. And in his first great rocker, Chuck tells a witty, cutting story. His raunchy, raging 25-second guitar solo, too, motorvates like a motherfucker.

In 1980, Jet Lag, a fledgling music 'zine published by Steve Pick and John "The Mailman" Korst in St. Louis, asked Mr. Berry to listen to some punk rock records. His appraisals were solid gold. "What's this guy so angry about anyway?" he asked of the Sex Pistols. "Guitar work and progression is like mine. Good backbeat. Can't understand most of the vocals. If you're going to be mad, at least let the people know what you're mad about."

In 1977, NASA launched Voyager 1 into the cosmos. The craft had no particular place to go, but it carried with it a gold record called "The Sounds of Earth." Along with Bach and Mozart, "Johnny B. Goode" was etched into the grooves. The selection was controversial — some deemed the tune ephemeral kid stuff — but if Saturday Night Live is to be believed, the first aliens to encounter it dropped the needle and declared: "Send more Chuck Berry."

7. Writing one of the greatest rock memoirs in prison

By 1979, Chuck Berry had already done two prison stints. During his third — four months for tax evasion in the Lompoc, California, pen — he began writing his memoirs, determined to tell his story on his own in his own way. Often bitter, just as often bittersweet, richly detailed, funny, lyrical and profound, the autobiography is a declaration of artistic freedom.

Chuck Berry preferred to call his signature stage move "the scoot" and even distinguished it from the one-legged hop-along that looks nothing like a mallard waddle. Whatever you call it, his animated style on stage, learned from bluesmen like T-Bone Walker, became as weirdly liberating as his music itself. Marty McFly did a game impersonation and Angus Young tried to make it his own, but no rock guitarist ever prowled a stage like Chuck in his prime.

5. Playing a solo offstage at the Duck Room.

The date was December 11, 2013 and as always the venue was sold out. Fans had come from around the country and around the world to see Chuck Berry — for the first time maybe, or maybe for the last. You really never could tell with Chuck. Sure he was lost most of the time, sure he had trouble finding and keeping the key. And then, toward the end of the show, he just wandered offstage, the band in full rock and rolling mode. Maybe he was standing somewhere in the corner or sitting in the green room, but wherever he was he was still fucking playing. The crazed tone of his guitar was still howling and kerranging, and he was nowhere to be seen. The moment was bizarre, brilliant and unforgettable.

There's a moment early in Hail! Hail! Rock 'n' Roll, the 1987 documentary film based on Berry's 60th birthday concerts at the Fox Theater, when Chuck Berry and the band, including Keith Richards on guitar, work up "Carol," which the Stones recorded on their first album. Richards wants to lead the band and take the solo; Chuck is having none of it. They start and stop, start and stop, with Chuck glaring all the while. He wasn't just fucking with Keith. He was reminding everyone that you can't just dash off a Chuck Berry riff. You have to get it right; you have to play it like you mean it.

Chuck Berry didn't just invent the language of rock & roll. He created popular culture as we know it. His infinite reserve of images — records, DJs, movies, cars, food, dancers, jukeboxes and guitars — fused to relentless rhythms and elemental melodies, serving as affirmations of a youth culture thrilled to have their daily lives and loves sung and swung back at them. Chuck understood his audience, and his audience loved him for it.

2. Integrating St. Louis and beyond.

In the mid-'50s, as Chuck Berry was making a name for himself on the circuit and pushing the limits and widening the appeal of rhythm and blues, he was also setting the stage for integration — but not without pushback. At his Club Bandstand (located near the intersection of Delmar and Grand, with a name shrewdly copped from Dick Clark), he established his official fan club, held dances for black and white teens, and performed for fully integrated audiences. In 1958, authorities viewed such establishments as threats. Tired of the hassles, Berry closed the Bandstand after two years. But there was no shutting down the music that was desegregating radio stations across the land.

Think about it. Right this minute, and the next minute, just down the road apiece or around and around the world, someone is blasting, humming, howling, studying or playing a Chuck Berry song. His songs started out as the expressions of a singular American vision, but they have become universal. If they are not timeless, nothing is. Any time a guitarist or a singer wants to be part of the tradition, they need only turn to "Rock & Roll Music" or "Come On." That's what the Beatles and the Stones did. And you can do it too. Not because the tunes are easy, but because the tunes belong to anyone who can feel them.