Who let the Shriners out?

By Byron Kerman and Rose Martelli 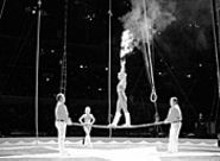 How much fun can a circus truly be when, deep down, we adults know that those steep ticket prices are used to line the silken pockets of corporate gluttons? Not so, fortunately, with the charity-funding Moolah Shrine Circus, an annual St. Louis-area delight now in its 61st year.

Pitching its tents at St. Charles' Family Arena (2002 South River Road) for eight shows May 1-4, the traditional three-ring hoopla benefits the Shriners' work with children's hospitals. (The organization's main objective is to provide free hospital care to children with orthopedic and burn problems.) It also continues its collaboration with Tommy Hanneford, a fifth-generation circus performer and producer who's arguably the biggest name in circuses this side of Barnum and Bailey. Hanneford's kids and grandkids have spent their lives performing for and with him; this year, one of his granddaughters wrangles the country's largest Arabian-horse troupe.

Circus chairwoman Gale Bennington can't help but use words such as "amazing" and "outstanding" when talking about the event; he's particularly psyched about the motorcycle globe ("It's three motorcyclists in a wire cage, and there's also this woman just standing in there") and Mark Karoly's "comedy horse act," which, he says, "people just go crazy for, and it really gets the kids and the adults laughing." Tickets range from $10-$25 and can be purchased at the Family Arena box office, any MetroTix outlet, online at www.metrotix.com or by phone at 314-534-1111. --Rose Martelli

Today's headlines are as dismal as ever. Internationally, you've got your wars and suicide bombers. Nationally, the rich call the shots and the poor get the shaft. Locally, the Krispy Kreme doughnuts they sell at Dierbergs just ain't the same as the hot ones at the KK stands. Amid all this tragedy, there shines a beacon of hope: Baskin-Robbins is giving away ice cream. Yep -- one scoop of any flavor you want from 6-10 p.m., tonight only, and B-R makes a donation to a children's-literacy charity for every freebie. Here's an idea: There are nine participating Baskin-Robbins (www.baskinrobbins.com) parlors in the metro area. Gas up the minivan and take the nuclear family to heaven, one free cone at a time. -- Byron Kerman