'Cue the Sights: Sugarfire Smoke House delights the eyes and the palate 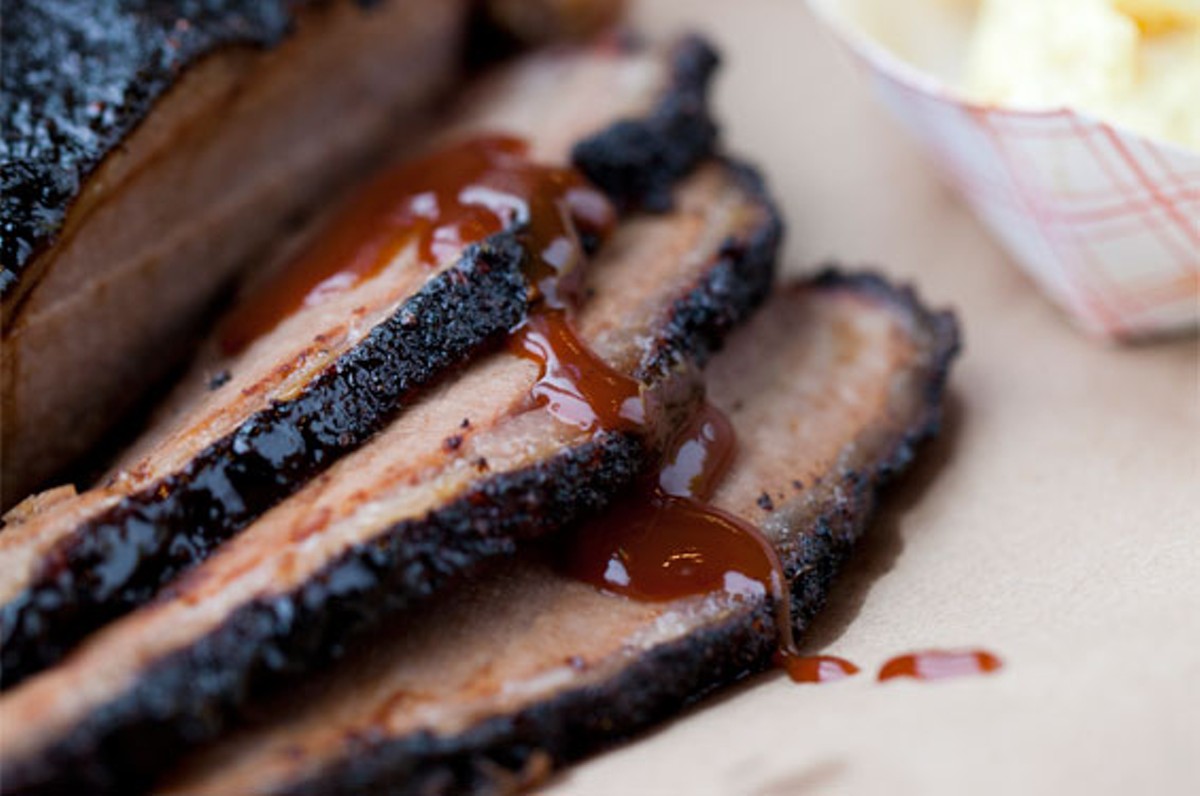 'Cue the Sights: Sugarfire Smoke House delights the eyes and the palate

Ribs. You've returned to Sugarfire Smoke House with a hankering for those ribs: meaty baby- backs gnarled with a spicy dry rub and imbued with woodsmoke and, more than anything else, deeply, sweetly porcine. The brisket isn't even on your radar. But then, as you near the front of the line to order, executive chef David Molina slaps down a whole brisket on his cutting board, and suddenly you're gauging the odds that none of the customers ahead of you will get the burnt end.

Or maybe it's the other way around. You've come back for more brisket, sliced very thickly, as thickly as you'd cut a Sunday roast, yet still remarkably tender and capped with a ribbon of fat. The Sunday roast is a more apt comparison than you realized because while the brisket's flavor isn't as smoky as you might prefer, it compensates for this with that rich fat and a deeply beefy essence.

But then, as the queue for 'cue winds its way toward the counter, Molina or one of his kitchen crew pull apart a hunk of smoked pork shoulder. The sight of the pork, glistening with its own juices, is sales pitch enough, but then it's piled onto a toasted bun, drizzled with Carolina-style mustard barbecue sauce and topped with a heap of cole slaw.

All of which is to say that you must approach three-month-old Sugarfire Smoke House with an open mind as well as an empty stomach. This barbecue joint from prolific local restaurateur Mike Johnson (founder of Roxane and Boogaloo, among many others), and Charlie and Carolyn Downs of dessert palace Cyrano's, operates as a cafeteria. You order a meat or sandwich first. Then you move your tray down the line to the selection of sides, then to the desserts, then to the cash register. Of course, you can make your choice simply by perusing the menu, but even when you can't be dissuaded from ordering the brisket by that Carolina pulled-pork sandwich, you still might be tempted by one of the daily specials. (You love burnt ends? How about a burnt-end "cheesesteak"?)

Sugarfire is rather small, a single dining room with tables crowded together. (The restaurant is tucked into a modern, mixed-use development along Olive Boulevard in Olivette, just west of Interstate 170. If you didn't know it was there, you might never find it.) The interior is weathered-roadhouse — if a touch generic, then at least not gimmicky. The line to order stretches from the entrance around half of the dining room's perimeter. Along the way is a fountain with cola, root beer and other sodas from Excel Bottling Company of Breese, Illinois. Iced tea, sweetened and not, is also available, as are (behind the counter) beer and booze-spiked milkshakes.

As at most barbecue joints, you can order meat as a sandwich (with one side included) or a plate of just the meat (with two sides). If you simply can't make up your mind — or want to try more than one meat — Sugarfire sells its brisket, pulled pork and smoked turkey breast à la carte by the quarter-, half- or full pound, and the ribs are available as a serving of just four bones as well as a half and a full rack. Spicy smoked sausage is served by the link.

Sides include the usual: cole slaw, potato salad, baked beans in a sweet barbecue sauce and french fries. The fries are thin and can be crisp but were inconsistent over my visits, often undercooked and oily. Here, too, the cafeteria set up should influence your decision. Besides the basic selection, there are daily side specials. Keep an eye out for the grits, either thick with cheese or as a thin fried cake, the creamy mac & cheese and the collard greens.

Attempting to sample each of Sugarfire's condiments can be a challenge, partly because there are a dozen of them, partly because you never know which particular sauces will be on your table. There are usually two or three squeeze bottles on any given table, but how these are distributed follows no discernible pattern. There is also a condiment station past the cash register, though here, too, not every sauce is always available. (Whenever I was in the mood for the distinctive, horseradish-spiked "White" sauce, it wasn't around.) At any rate, I especially liked the dark, rich coffee-barbecue sauce and the medium-hot "Texas Hot."

Besides barbecue, Sugarfire also touts its burgers, which are made from a blend of grass-fed chuck, brisket and short rib from Rain Crow Ranch in southern Missouri. Burger fiends might flinch when they see a patty made from such a promising blend of ground beef smashed thin on a flattop and grilled to well-done. It's a tasty fast-food-style burger, but I'd love to try a thicker, medium-rare version.

At the end of the cafeteria line is a case with slices of Carolyn Downs' various pies: cherry, apple, pecan and more. Across the entire selection, the crust is light and flaky, the fillings sweet without sacrificing their individuals characters. Maybe the best aspect of Sugarfire's cafeteria set-up? You can ask for a slice of pie before you're too full to consider dessert.