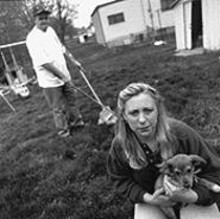 Ah, to remember the days of old. At the turn of the century (that's the fur-trader-and-beaver-trapper turn-of-the-century and not Y2K), St. Louis and her outlying towns were rough-and-tumble. Twisting trails ran through what would become St. Louis County, and lush forests blanketed the landscape. Into this untamed wilderness came some of those crazy foreign cowboys of old, the French. They settled places like Chesterfield and Creve Coeur and left their footprints elsewhere. Frontenac, for example, was named by wannabe-Frenchman Benjamin Wood after his travels through Quebec. Seems these early white settlers wanted to make a Versailles of their very own in the New World.And, as the world knows, the French like having stuff done for them. After all, these are the people who still brag about giving us the Statue of Liberty, who are widely regarded as unenthusiastic when it comes to personal hygiene and who even embraced Jerry Lewis as a national hero.

Although there are no big French communities in West County anymore, old habits die hard. There's money in these parts, as well as some well-endowed folks who like taking advantage of the finer things in life while letting others do their dirty work.

Enter Yucko's, the heavyweight champions of, as the French say, la merde. Yucko's, the self-proclaimed No. 1 service in the No. 2 business, specializes in dog-poop removal. But make no mistake: This is not just a waste-disposal service. The people of Yucko's are the laborers who comb the big backyards of the bourgeoisie, searching for piles of stinky.

"I mean, hey, that's what we do do. It's poop!" says Debbie Levy, Yucko's founder and chief executive officer. "No dog, no job too big or small. We're not afraid of nothin'."

Levy is the head entremanure of her K-9 excrement business. Since the inception of Yucko's in 1990, the company has doubled in revenue every two years. Levy, 42, won't disclose the company's sales in 1999 but says they're in the six figures -- and that's no bull.

But, Levy says, her business has taken a hit because of her recent clash with the Bi-State Development Agency and Wall USA Inc., a German company that constructs those new Euro-looking bus-stop shelters that line major thoroughfares like Lindbergh Boulevard. Yucko's had a contract for five shelter signs to be displayed every month until November 2000. One was to be placed in front of ritzy Plaza Frontenac. The controversial advertisement depicted a cartoon dog staring at a pile of poop about 3 feet taller than he. The dog sports an overly happy look on his mug -- a shit-eatin' grin, as it were -- as though the dog knows he's made a mess but you get to clean it up. Yucko's, the ad notes, is the place to go for "Professionals in Turd-Herding."

Exactly why anyone would bill himself a "turd-herder" is a question in and of itself. But the signs wound up gracing Wall USA bus shelters in Frontenac and Creve Coeur, putting some local residents' panties in a twist. Bi-State officials say they received several phone calls from angry citizens saying they would prefer not to stare at cartoon crap while driving down Lindbergh. Seems youngsters riding shotgun in BMWs were asking, "What is a turd?" Sacré bleu! Sensitive to the uproar, Bi-State official Thomas Sturgess fired off a letter to Wall USA, demanding the immediate removal of these signs.

"I am of the opinion that it is not in good taste and is inconsistent with the positive public image that we strive for as part of our corporate values," the letter states. "Specifically, I refer to the 'Turd Herding' wording and the large brown pile in the center of the sign.... Such language may be common in some parts of society today, but it is vulgar and not acceptable or what we want the Agency to be associated with."

Because Wall USA essentially must do whatever Bi-State tells them, the signs came down on March 10.

"We give Bi-State a very small percentage of our revenues each year as a payment for being the company we contracted with," says Kippy Burns, Wall USA general manager. "Part of our agreement with them is, not only do we have to have a particular performance specification, but if the advertising is deemed inappropriate to a particular community standard or to Bi-State's corporate ethics, they can ask us to remove the copy, and that's what happened here."

Wall USA has a 15-year contract with Bi-State to erect and maintain 400 bus shelters. All 400 will carry advertising, and the company's profit, for the most part, is generated through these signs.

Levy says her business was "booming" when the signs were up and complains that business has slowed since their removal. Before the signs, she says, she was averaging two or three phone calls a day. But after the turd-herders went public, she claims, Yucko's was getting about seven calls a day -- an increase of more than 100 percent!

Bi-State's disapproval, Levy says, put a chill on the business, threatening the livelihoods of productive members of society -- folks like Turd-Herder No. 1, Harry the Executive Pooper-Scooper, Fat Bob and the silent worker, a part-time Yucko's employee who prefers to stay out of the limelight.

Levy raised a stink with Wall USA and Bi-State. She complained about censorship, the narrow-mindedness of some folks ("People are afraid to talk about poop," she observes), the plain injustice of it all. Ultimately, Yucko's yielded to the bus company and popular prejudice.

Working with an advertising agent (who also prefers to remain anonymous), Yucko's retooled its bus-shelter ad. The new version features the same rascally dog and the word "Censored" coming both out of his butt and running across the bottom of the sign where "Turd-Herding" used to be. The ad has been approved, and Wall USA agreed to pay for the printing of the new signs.

In the end, everything appears to have worked itself out.

And for Yucko's, the future appears bright and brown. The company has already started work with other animal feces and will continue to rise to the occasion.

"We've picked up goose poop," Levy says, way too enthusiastically. "We used to have a customer who had a pot-bellied pig, and we did the Mardi Gras one time. I tried to give away the Anheuser horses' poop, but nobody would take it."

And, contrary to popular belief, the Yucko's staffers do not put the poop in paper bags, place the bags on people's door stoops and set them on fire.

Yucko's charges $15 a pop, on average, but cost varies, depending on the size of the yard and the number of dogs.

Of course, you could just pick up your own dog's shit for free.

Jump to comments
« Letters to the Editor   |   How Would You Describe Your Fashion Sense? »