Dick's Got the Beat

We check out Gephardt's iPod playlist, chat with a Blind Boy and listen to the Scared 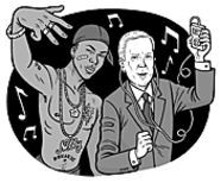 "I like Nelly. He's from St. Louis. He's a very good rapper. I like Eminem.... Oh, I don't listen to the lyrics. I just like the music. I like the beat."
-- Dick Gephardt, in the New York Times Magazine

The Blind Boys of Alabama formed over 60 years ago, and they are the greatest gospel performers working today -- perhaps the greatest in history. Time has blessed them. Their accomplishments in the past fifteen years -- Grammys, world tours, sessions with Tom Waits -- barely take the measure of their music. The Boys erase the line between here and beyond. If you don't believe it, you haven't heard Clarence Fountain, George Scott (on hiatus for health reasons), Jimmy Carter, Caleb Butler and Eric McKinnie sing. (You can this Friday, December 17, at the Sheldon Concert Hall.) A member of the group since 1991, road manager, singer and drummer Eric "Ricky" McKinnie took some time to lay down the gospel truth.

B-Sides: You were brought up singing gospel, but what attracted you to drums?

Does the group's recent success surprise you?

God has been good to us. He has shown favor on the Blind Boys and opened up His window of blessings.

Is it difficult being one of the newer members?

No. I am not the youngest member in the group. That is Jason Pierce. I am the youngest blind guy. I lost my sight in 1973 to glaucoma.

I have tried to imagine what it is like to be blind. I can't do it.

It's like anything else. There's not many things we can't do that everybody else does. We are blind, but we can see with our minds. Music has always been the same to me, when I could see or when I was blind. You learn to use what you got.

In gospel communities, there has been a long resistance to secular music. How has that changed over the years?

There is also resistance to gospel in secular pop. That changed with soul music in the '60s. There's not as much traditional gospel in soul and R&B today.

Gospel and soul music go hand-in-hand. Everything is derived from the gospel. It all works out. I listen to modern music. Sometimes I hear the gospel; a lot of people use the same chords, sing the same turns. You can hear it. The influence is there.

Your show in St. Louis will feature Christmas music. How do you keep those songs from becoming cheesy?

We took other musicians and made it work. People need people. And working together works. Christmas has always been commercialized. You know, you used to buy candy and give it to someone. Now it's just on a bigger scale. It's all about the good news. We sing the good news all year 'round. -- Roy Kasten

The No. 1 comment we get here at B-Sides -- besides "Hey buddy, pay your tab" and "Quit sleeping with my significant other" -- is "more Homegrown Sounds, please." We certainly want to, but the problem is that a lot of live local music is pretty rote -- so much so that the reviewbots we send out come back with their circuits fused, praying for the release of sweet junk-heap oblivion. This is not to say that there aren't plenty of great bands playing in the area, musically speaking, but a live show should be a spectacle of entertainment -- aurally and visually -- and that is where so many bands lack something. Watching someone solemnly play an instrument has been done to death. Where's the showmanship, the flair?

When James Gang, singer for the Scared, took the stage of the Creepy Crawl on Thanksgiving night in a manic fit, wearing what appeared to be a pair of pantyhose and Confederate-flag boxer shorts, he seemed ready to put on a show. Gang and the rest of the band (bassist Jay Blood, guitarist Roy Ugly and drummer Demented Dave) wore matching workshirts with the band's name stitched on, plus red-and-white face paint, so the group looked like Adam & the Ants after mugging the Misfits. The outfits, along with the flashing strobe lights set up onstage and the slasher-movie samples played between songs, only added to the overall effect of the Scared's metallic horror-punk. While fairly traditional in structure and sound, the band's music was set apart by the talent and energy of the players, particularly Ugly's searing and off-kilter guitar work. The 45-minute set featured mostly originals and a few covers, and the minor technical glitches that came up didn't ruin the overall experience.

Sure, stage names, whiteface and the like can come off as gimmicky and silly, but would songs about dismembering girlfriends be as cool coming from a guy in a J. Crew turtleneck? Would "Tutti Frutti" have been the same if Little Richard called himself Ricky and dressed like Nat King Cole? The show -- the image -- is an intrinsic part of music, and that is what so many local bands don't understand. The members of the Scared do, and even if they don't always hit the mark, their efforts make them more entertaining than many of their peers. -- Erik Alan Carlson