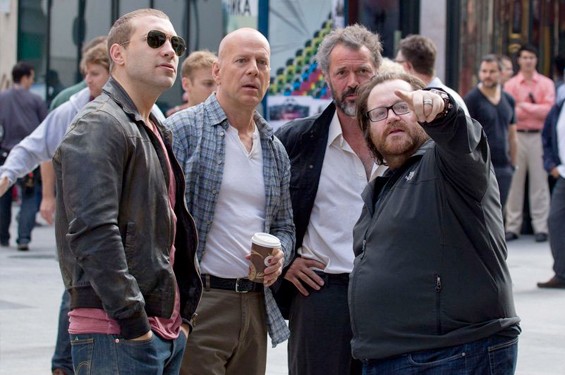 Jai Courtney, Bruce Willis, Sebastian Koch and John Moore on the set of A Good Day to Die Hard

Does anyone care about John McClane anymore? That's not the same as asking if you want to see A Good Day to Die Hard, the fifth in this series of films with increasingly outlandish action — and increasingly cumbersome titles. The most recent entry — the slick, ridiculous hit, Live Free or Die Hard — was as good as any installment since the 1988 original.

But that doesn't mean it's worked its way into people's lives like John McTiernan's original. Again, does anyone still care about Bruce Willis's John McClane, the New York cop first seen saving his wife from terrorists in that LA skyscraper? That might seem a silly question, since action movies don't usually demand audiences care about their protagonists so much as see them through to the end. But they don't have to be that way, and no film proved that better than the original Die Hard — even if every sequel has proven it a little less.

A movie about blowing up bad guys that's also about patching together a failing marriage, Die Hard opens with McClane reluctantly arriving for a holiday visit in Los Angeles, where his wife Holly (Bonnie Bedelia) has taken a job, bringing her two kids with her while leaving her husband and married name behind. It is , however briefly, a movie about husbands and wives. In a well-played early scene, John and Holly realize how much they've missed each other before old arguments take over their conversation. Their attempt at reconciliation isn't given as much time as the terrorist killing, of course, but it's there in the background motivating McClane's every action. Without it, Die Hard would be about a businesswoman killed in a terrorist attack while her estranged husband watched from the East Coast.

The appearance of those terrorists — or thieves disguised as terrorists, as it turns out — brings all talk to a halt. The rest of the film finds McClane fighting not just to save himself or rescue the hostages but to save his wife and keep his family together. To the film's credit, those loved ones feel integral rather than as devices added in to raise the stakes of the action–like all the suckers who made the mistake of befriending Charles Bronson in Death Wish movies. The film takes McClane on a personal journey, too, and not just from savvy cop to terrorist-slayer. As Adam Kempenaar, host of the Filmspotting podcast, noted in recent reappraisal, McClane's a tough guy but one who's always playing at being tougher than he really is. In one of the best scenes, a dramatic talk with L.A. cop Al Powell (Reginald VelJohnson), McClane breaks down as he tells Powell to let Holly know how wrong he's been if he doesn't make it out alive. There are reasons beyond its seasonal setting that Die Hard has become something of a Christmas staple. Like It's a Wonderful Life, it's at heart a film about a man reconnecting with what truly matters, albeit one whose George Bailey blows up most of Bedford Falls in pursuit of Mr. Potter.

The success of the film demanded sequels but nothing about Willis's character really did. Released two years later, Renny Harlin's Die Hard 2 found McClane now a member of the LAPD and happily back together with his family — and watching in horror as Holly became one of thousands of airline passengers suspended in a holding pattern while another batch of terrorists take over the control towers of Washington's Dulles International Airport. Here Holly's gone from character to prop, and the finale's tearful reunion has little of the impact of the original's. Consequently, McClane feels less like a character than a device himself, not an ordinary guy forced into extraordinary situations but an action hero who's shtick is managing to be in the wrong place at the wrong time.

Family is even more marginalized in 1995's Die Hard With a Vengeance (directed, again, by McTiernan), which finds McClane back in New York, estranged from Holly, and spending a lot of time at the bottom of the bottle, a habit never mentioned in the previous films. Though his fellow cops occasionally urge him to reconcile with his wife — now just a voice heard briefly on the other end of a pay phone — his private life and public adventures now have nothing to do with each other. Taking McClane away from his family turns him into what he's never been before: A hard-living, plays-by-his-own-rules cop hero only made distinctive only by Willis' performance.

The same is true of 2007's Live Free or Die Hard, which reunites McClane with his now college-age daughter Lucy (Mary Elizabeth Winstead), pays lip service to some vague family problems, and then, to juice up the final act, reduces Lucy to a hostage. (She's Holly in Die Hard 2 all over again.) Willis is, again, excellent as McClane, and Len Wiseman's film gives him a monologue about the insufficient wages of day-saving: "You know what you get for being a hero? Nothin'. You get shot at. You get a little pat on the back. Blah blah blah. 'Attaboy.' You get divorced. A wife who can't remember your last name. Kids don't wanna talk to you. You take a lot of meals by yourself."

At this point Willis could be delivering that monologue in almost any of his action films. Where McClane began as a particular man with a unique personality and his own set of problems, the series has hollowed him out, turning him into a generic hero who can be dropped into any situation to say his catchphrase at least once per film with the predictability of a pull-string toy.

That doesn't mean the Die Hards have gotten bad. To the last, they're glossy, big-budget action films crafted with care and built around this most charismatic of movie stars. But to revisit them is to see a series that's lost sight of what set it apart in the first place. Maybe A Good Day to Die Hard — which this time teams McClane up with his estranged son — will change that. Maybe it will be as much about forging bonds as dodging bullets and make McClane back into a character we might feel for. It's a long shot at this point, but he's beat the odds before.

Jump to comments
« The Partners! Steven Soderbergh and Scott Z. Burns talk Side Effects and collaboration   |   Count Your Blessings: There's too much book in Bless Me, Ultima »