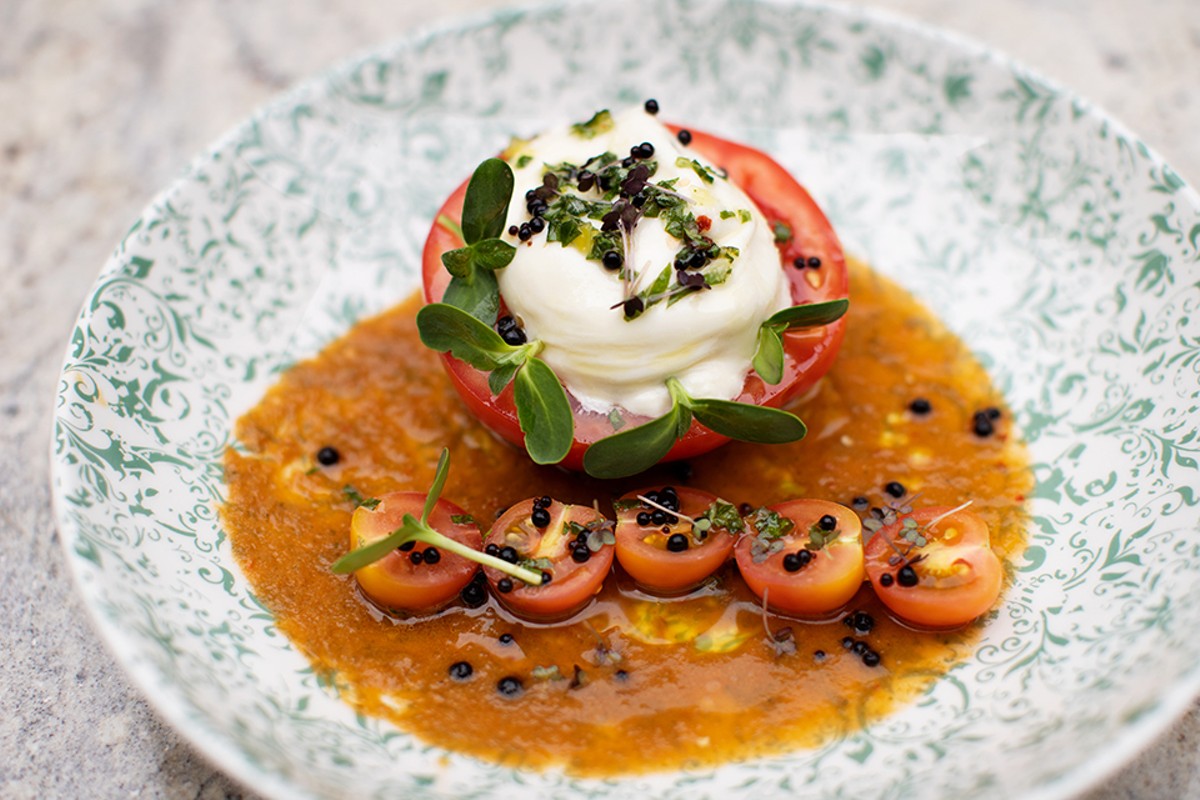 This winter, Edera Italian Eatery proved itself the gold standard of pandemic dining, setting up an outdoor dining area of individual glass chalets that turned its already stunning back courtyard into a fairy tale. Between the twinkling lights dancing off candlelit glass and the gentle snow falling, it was an absolute dreamland that had diners clamoring for a chance to partake in such a lovely experience.

Now, the chalets have been taken down for the season, but that doesn't mean diners cannot still bask in pure magic, courtesy of Edera. All you have to do is snag a seat at a table in the ivy-adorned courtyard and order the 'nduja honey pizza, a work of pizza majesty so glorious it will put stars in your eyes. The crust — yeasty, chewy and char-speckled perfection — puffs up around the edges about two inches off the plate, then dramatically drops off to a thin interior covered with a layer of tomato sauce that mixes with the rendered drippings of spicy 'nduja sausage. It's like a tomato-y buffalo sauce that has just a hint of heat, which contrasts beautifully with a drizzle of honey. Hunks of the sausage and whole cloves of roasted garlic adorn the pie like meaty, earthy jewels — it's positively magical.


It's no surprise that such pizza perfection is on display at Edera. The restaurant, which opened in the former Scape space in October of last year, owes much of its identity to Mike Randolph, the celebrated chef who serves as the restaurant's consultant. Known for such former gems as Randolfi's, Privado and Pùblico, Randolph made his initial mark on the city's dining scene at the Neapolitan-inspired pizzeria the Good Pie, which single-handedly changed St. Louis' pizza landscape. 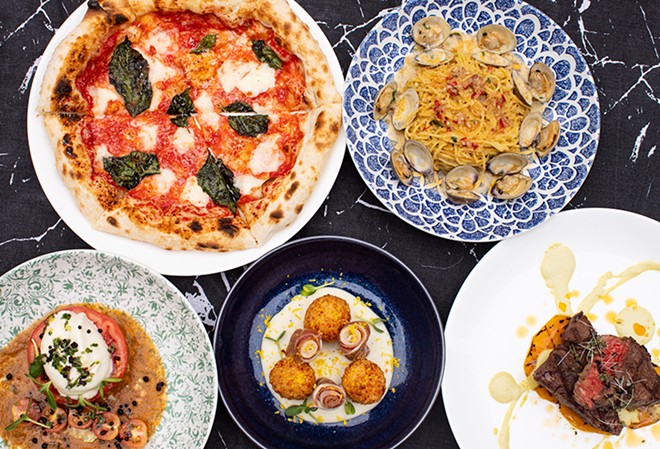 Randolph came on to the project after the Koplar family, who had owned Scape since its inception in 2007, decided to give the restaurant a complete overhaul last February. Having closed Scape in April of 2019, they were not willing to let the space go, but instead wanted to see a completely different concept take its place. For them, Randolph was an easy choice; they'd enjoyed dining at his now-shuttered Randolfi's and wanted to bring something in that spirit to their spot in the Central West End.

The result of that relationship is a restaurant that has pieces of Randolfi's elevated red-and-white-checkered-tablecloth feel with Scape's Central West End stylishness. The outdoor courtyard (the focus of this review) remains the most beautiful patio in St. Louis, its brick and stone column walls covered in verdant ivy that gives it the feel of a Roman palace. Beautiful foliage creates a garden feel, with tables spaced out amongst the greenery. Here, you forget for a moment that dining al fresco is a pandemic-related choice (or in many cases, need), for there's no better seat in the house.

With a backdrop like that, the Edera team could serve you Chef Boyardee and you wouldn't notice. However, the restaurant pulls out all the stops to create an upscale Italian affair that goes beyond its outrageously good pizza. Though Randolph's touch is indeed felt, much credit goes to chef Andrew Simon, Scape's former executive chef who came back to the restaurant a few months ago after shuttering his Clayton eatery, Charred Crust. Building upon Randolph's foundation, Simon balances the comfort of easy Italian fare with the modern elegance of the space's previous iteration. Burrata, served with prosciutto and pesto, is an easy crowd-pleaser; served with charred bread, the luxuriously creamy cheese is pure decadence. Meatballs, another small plate, balance the sweetness of pork with the earthiness of lamb. The meat is spiked with just enough spice to warm the palate, then dressed with vibrant tomato sauce. 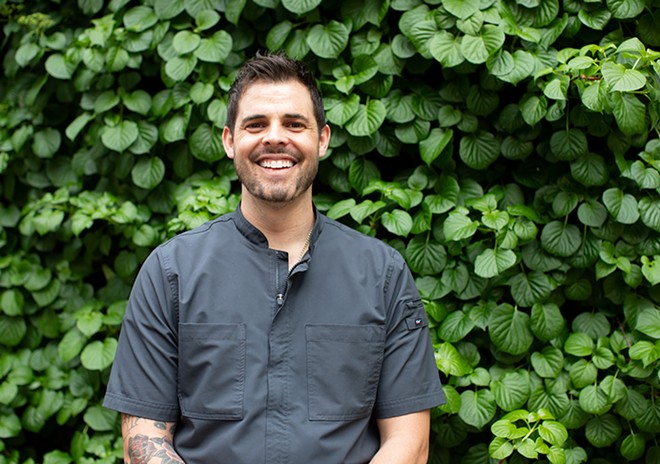 The scampi impressed by deviating from the typical form of butter, garlic and bread crumbs. Here, the shrimp are sautéed with kale, potatoes, roasted garlic and Calabrian chili oil, which serves as a drizzle for the dish and allows the shellfish to shine through without drowning in sauce. The highlight of the small-plates menu, though, is the arancini. The golden-fried rice balls are served alongside rose-shaped rolls of prosciutto, rich peppercorn Asiago cream and cured egg; it's perfection of the form.

The 'nduja pizza may dazzle, but it doesn't outshine Edera's other magnificent pies. The Margherita is, hands down, the best version of the classic in town, thanks to its outstanding crust. Simple crushed tomatoes are spread atop the dough, then topped with fresh mozzarella and basil leaves. It doesn't get better, even in the mother country. The restaurant also succeeds with the ricotta pizza, which pairs the garlic herbed cheese with caramelized onion, mozzarella, Calabrian chili oil and pieces of pulled chicken that magically do not turn into chicken jerky in the 900-degree oven. It's masterful.

Other noteworthy dishes include the pappardelle with Bolognese, which pairs ribbons of housemade pasta with rosemary-perfumed creamy pork ragout. A veal chop served with rainbow chard and pancetta is enlivened with pickled fennel, and an off-the-menu branzino special impressed thanks to the addition of crabmeat and chili-oil-dressed cauliflower.

The dish that left the biggest impression at Edera — perhaps even more so than the pizza — is the almond tart that ended the meal. A dense, almond-shortbread crust served as the base for almond custard and fluffy pastry cream that tasted as if amaretti cookies fresh from the Italian bakery's oven had a baby with a slice of almond-buttercream wedding cake.

That you can bask in such a wonderful sendoff under the stars and twinkling lights on Edera's patio seems like such a gift, especially considering what dining has become this past year — it's a little slice of heaven even more magnificent than that 'nduja pie. 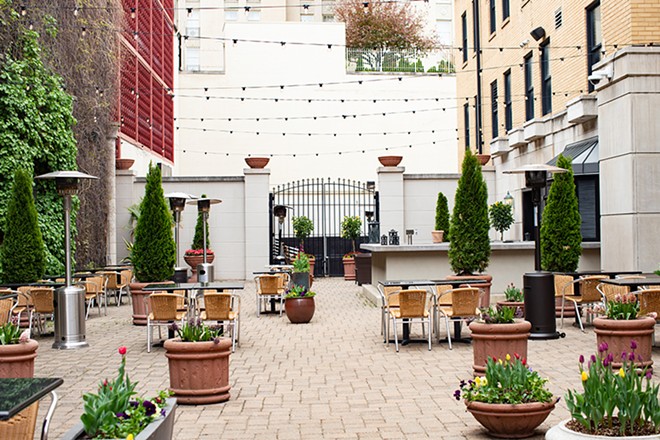