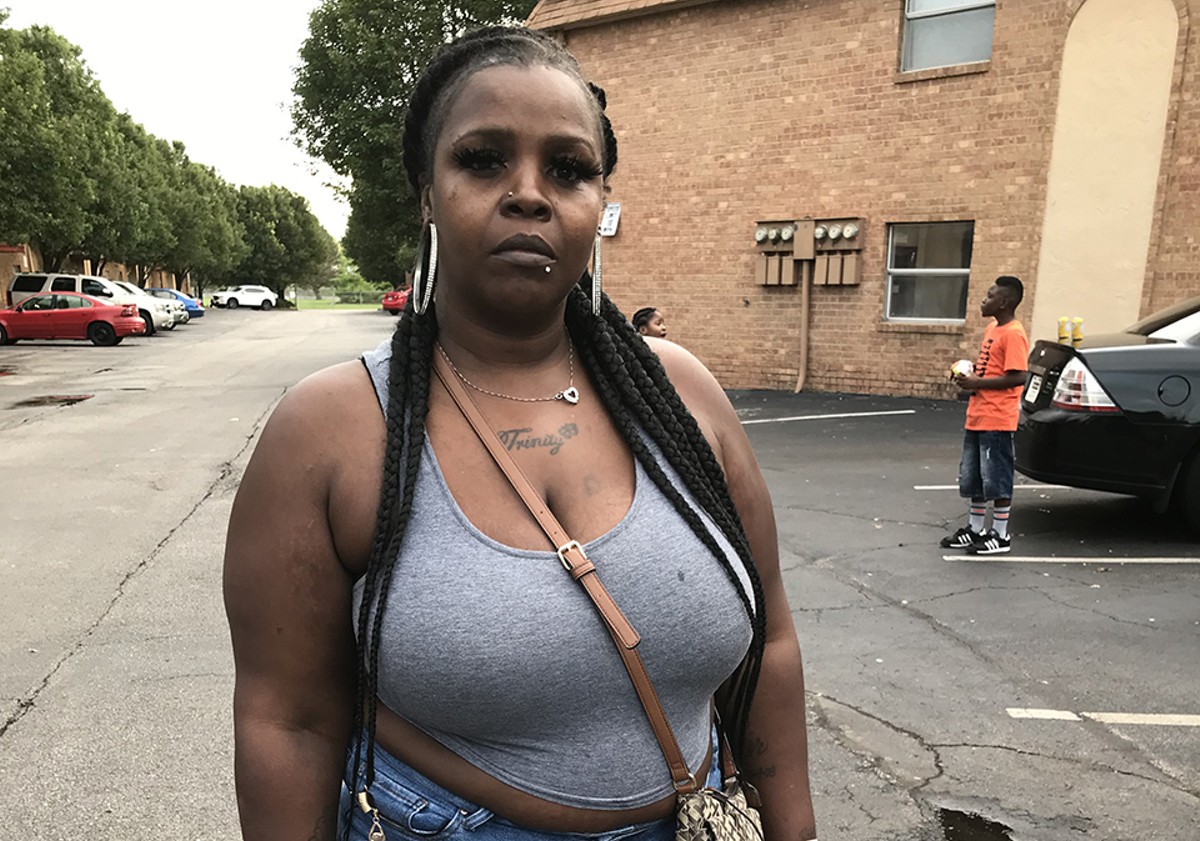 Janica Washington is one of potentially thousands of people facing eviction in St. Louis. MIKE FITZGERALD

MIKE FITZGERALD
Michelle Hanger expects to be evicted from her apartment, and she doesn't know where she'll go.

Michelle Hanger, who also lives at Southwest Crossing Apartments, says she has missed two payments of her monthly rent and expects to be evicted. Like fellow tenant Janica Washington, Hanger says she doesn't know where she will live next.

"They're saying you got to move," Hanger, 38, says. "They're sending maintenance men to do it."

Jim Sansone, vice president of the Sansone Group which recently acquired the apartment complex through receivership, did not return repeated calls seeking comment.

Hanger acknowledged she is growing desperate.

"At this point I'm not sure where I would go," she says. "It's hard. It makes you want to commit suicide."

The options for St. Louis tenants in Hanger's predicament are, by most accounts, in flux.

In early August, at the request of housing activists and city Sheriff Vernon Betts, St. Louis Circuit Judge Rex Burlison agreed to a citywide eviction freeze to last until Sept. 1.

Burlison OK'ed the freeze on the grounds that tenants will have more time to apply for and receive help with rental and mortgage bills through the $5.4 million in city CARES Act funding.

And what will happen beyond Sept. 1?

Conway, the mayor's chief of staff, says he's "comfortable that for the next 45 or 60 days I'll have enough funds to help people who haven't been able to pay their rent."

By that point Conway expects Congress to work out a deal on a second pandemic relief package.

"There's too much pressure on both parties not to come up with a deal," Conway says. "I'm confident they'll come up with a different style of unemployment, because no one, Democrat or Republican, can allow that to go."

But what if no deal happens over the next two months?

Earlier this spring, the city broke up four encampments for the unhoused near the city's center. Many of the camps' residents were sent to three motels and a former nursing home for Catholic nuns.

The city has extended its contracts with those facilities, but according to people who work with the unhoused — and willing to speak on background — these facilities are not taking in new residents.

What's more, many of the people sent there had a hard time adhering to the rules and left on their own, finding shelter either in abandoned buildings or near the St. Louis riverfront.

But even if the motels and the former nursing home had worked perfectly, it would represent a temporary fix at best, according to housing activist Kennard Williams.

"We're at the point where people don't have anywhere to go," Williams says. "You see a coordinated push to remove the population from people's eyes. That doesn't address the problem."

Williams' group, MORE — Missourians Organizing for Reform and Empowerment — is calling for a new eviction moratorium of at least 120 days.

"What are people supposed to do?" Williams says. "There are no jobs to go back to. Places are closed."

Williams notes the federal government has the funds to send a cadre of federal law enforcement agents to St. Louis for Operation Legend.

"But we don't have the money to get people off the street," he says. "Things are not adding up here with where all the money is going."

Williams praised Burlison's decision to freeze evictions until Sept. 1 but says it does not go far enough.

"There's no clear way for people to plan their lives," he says. "Or go about their lives, because so much about this is disrupting people's lives."

In large part, the housing emergency the city and the nation are both facing are unnecessary, according to Williams.

In a typical year, about 3.7 million evictions are filed in America.

But, because of the looming housing crisis, up to 28 million Americans face eviction between now and the end of September, according to the Princeton University Eviction Lab.

The consequences of even one eviction filing — even if filed wrongfully — could haunt a family and set back its members for generations.

Housing experts cite research that shows that eviction is not just a result of poverty — it is a major driver of it.

People kicked out of their homes lose their communities and suffer traumatic psychological and physical health effects. Research shows they move to cheaper neighborhoods with less access to fresh food and regular health care, and poorer-quality schools. People who are evicted suffer higher rates of divorce, mental health problems and are more likely to wind up homeless.

Princeton sociologist Matthew Desmond, who cofounded the Eviction Lab, calls an eviction the "Scarlet E" because it follows tenants the rest of their lives, making it difficult, if not impossible, for them to get loans for cars and homes and to obtain leases for new apartments, forcing them to pay overpriced rents to slumlords.

Evictions disproportionately affect women and children and people of color, penalizing society's most vulnerable populations. And evictions — especially a massive wave of them — will worsen the effects of the region's already chronic racial segregation, according to EHOC's Burleigh.

The pandemic and the job losses caused by it have the potential "to further segregate us, because you will have a disproportionate number of African Americans who will have these evictions on their records, limiting their choices, and frankly, pushing people to pay too much for substandard housing," Burleigh says.

The coming eviction crisis is causing area leaders to face the reality that they never really devised a long-term, sustainable solution for serving unhoused people, according to Camp, of ArchCity.

What's more, even though no St. Louis residents are being forced out of their homes, thanks to Judge Burlison's eviction freeze, eviction judgments are still being issued, Camp notes.

"There are more judgments stacking up, more families facing the threat of displacement," he says. "When the evictions resume, we're going to see another shock on our community as those things start to happen in another couple months down the road."

Modern America has never faced the scale of the housing crisis about to hit in the next few months — a catastrophe that's guaranteed to happen unless lawmakers in Washington end their deadlock and cut a deal robust and ambitious enough to allow tens of millions of Americans to keep a roof over their heads in the months ahead.

"I think we're kind of at the crest of a waterfall," Camp says. "We're very much teetering on the edge. And I'm surprised we haven't fallen off yet."