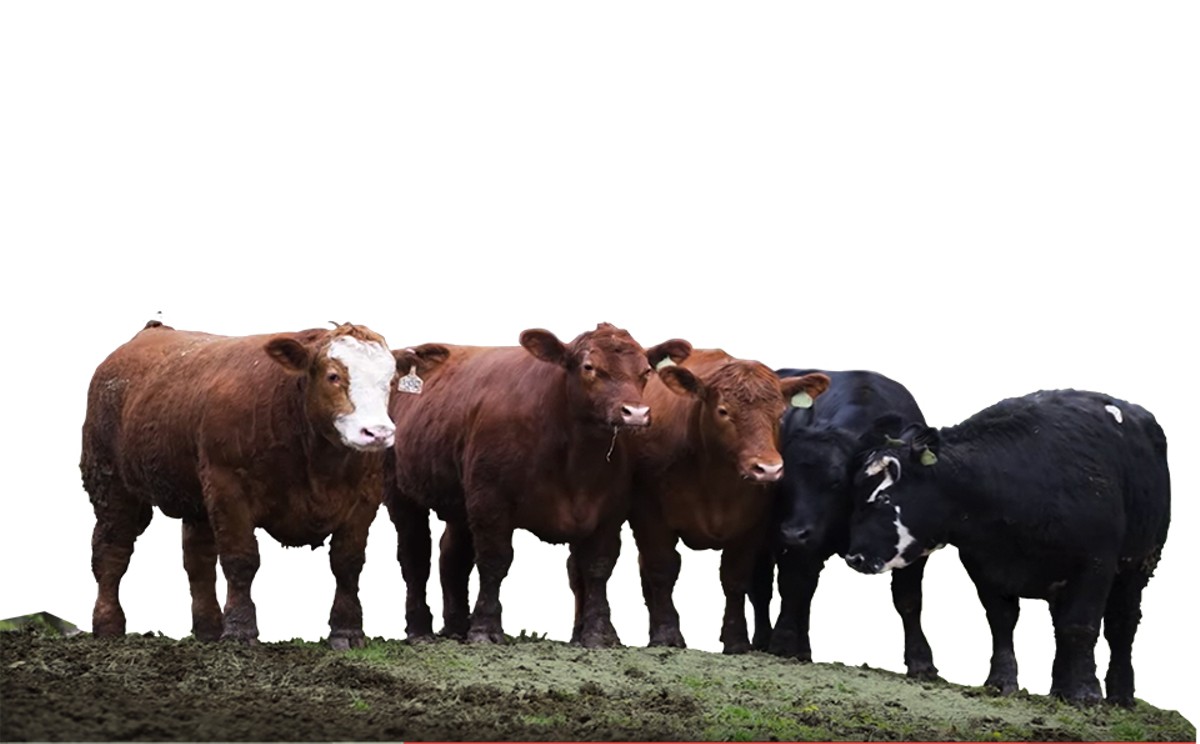 Act 4: All Who Go Do Not Return

Four days after the escape, Jay Weiner walked into the office of Omar Hamdan, where Weiner says he exchanged a $12,500 check for the lives of the St. Louis Six. (At $2,083 per steer, Gentle Barn paid nearly $300 more than Manno had agreed to pay for Chico.) The next problem was how to transport the herd — and to where?

Weiner: I was coming from California into this situation. We didn't have our own trailer. We had to depend on the actual slaughterhouse to help us transport them. It wasn't some very well-cleaned, well-taken-care-of rescue vehicle that I would normally be used to. It was a vehicle that was used for what it was used for.

Monik: Jay came out and said, "We're going to transport them in Wentzville," and the slaughterhouse workers actually assisted with the transport. It was bittersweet.

The St. Louis Six were loaded onto the slaughterhouse trailer. Hamdan posted a video of the cows exiting the pen, writing, "They are free and sorry for all the problems they are in a better home and they in the hand of Gentle Barn."

Brewer: I was in East St. Louis, in Cahokia, when they said they were rolling out. I basically raced them to the foster. When my friend told me that it was the slaughterhouse transporting them, I was a little shocked. But I was on such a high, like, "At least they're in the truck, at least they're getting out of the slaughterhouse at all." I got there, and even at that point [I was still feeling good], until I saw that dude pull out a cattle prod and start hitting them through the side of the truck.

Monik: There was a lot of controversy over it, but now that I look back on it, that's just how they treat animals. They're slaughterhouse workers; they treat them like property. They're big animals, if they don't want to move they won't move. But I would never touch them with a pole.

Weiner: There's a particular way that cows behave when they are fearful. They'll back into the corner.

Brewer: He had like a metal pipe, he was sticking it through the side of the truck, hitting them in the ribs and shit. My friend Sasha was ready to snap, and I walked up to Jay. He was like, "Meditate on it." We were pissed.

Monik: Me and Adam started videotaping, and [the slaughterhouse workers were] whacking the cows through the holes of the trailer, whack whack whack.

In a video provided to RFT by Brewer, a slaughterhouse worker climbs on top of one of the trailer's rear fenders and repeatedly jams a metal rod through the trailer's openings, shouting and banging the instrument at the cows inside. Moments later, Monik and Brewer both claim they heard a loud boom as one of the cows, later named Spirit, fell.

Weiner: I don't know when Spirit was injured. Nobody knows that. We have some thoughts on some videos that we saw, and there's a moment in the video that we posted when you see the animals coming out of the slaughterhouse, and walking to the door going to the trailer. You can see Spirit take a trip right there.

Brewer: I saw the cow go down and then go up on three legs.

Monik: That cow was walking fine until he was whacked with a freakin' stick.

Weiner: It's possible, but you can't say 100 percent that we can prove [Spirit's injury] happened there. There's nobody that can corroborate anything before we actually took possession, but they were also hit by police cars, and just the fact of cows running on concrete. ... What we do know is that by the time we got to the second location, he's already in trouble.

Short on transport options, Weiner opted to rehire Star Packing to move the herd to a vet center run by the University of Missouri-Columbia. There, doctors identified and treated Spirit's fractured ankle. But an infection took hold.

Weiner: I spent a tremendous amount of time trying to save Spirit. He won my heart over. He was wonderful and chill and accepting, and he seemed OK with whatever was going on around him, to the point where I was able to touch him, be with him. We wanted to do anything we possibly could to help him. He just couldn't make it.

Spirit was euthanized on May 27. 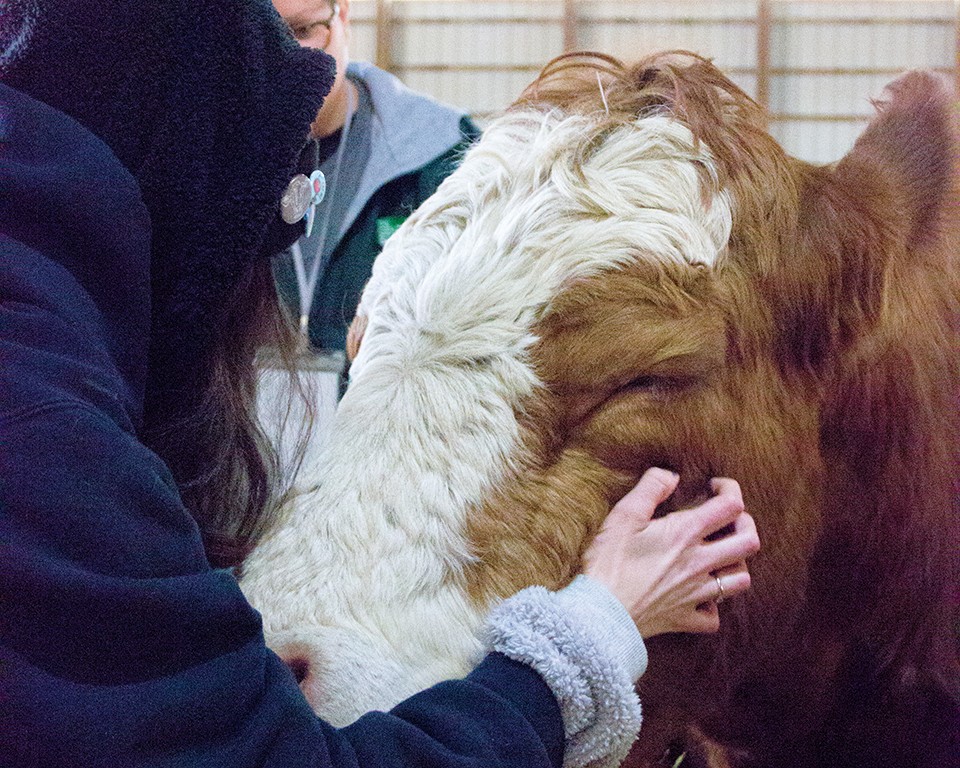 DANNY WICENTOWSKI
The cows were initially terrified of humans. Two years after their rescue, they readily accept scratches from visitors.

Weiner didn't arrive alone in St. Louis. He brought along a video-grapher, whose footage became a nine-minute documentary (in partnership with GoFundMe) on the slaughterhouse escape. In May, while the herd grazed on a foster farm, Gentle Barn launched a GoFundMe campaign to build a new home for what remained of the St. Louis Six. Gentle Barn raffled naming rights to raise additional funds. Eventually, Chico was joined by Roo, Houdini, Eddie and Johnny Cash.

Michelle Robertson, manager, Gentle Barn Missouri: [Ellie and I] were starting a turkey road trip, driving one of our turkeys from California to Tennessee, because that's what we do. We had the van packed, and Ellie tells me, "Jay just took a red eye to St. Louis because there were cows that escaped and they needed help."

Laks: We both thought that driving the cows to California would just be asking too much. We didn't have room at our location in Tennessee. At this point, I said, "I have to meet them to know what's the best for them." So Jay and I flew out to Missouri together, and I went to meet them for the first time.

Robertson: I've spent a lot of time with cows. I primarily volunteered with a herd of 35 in California, so I've seen how family-oriented they are, how everybody has roles within the herd, how they kind of communicate with each other, where everybody kind of places themselves.

Weiner: They were all still pretty freaked out. They had just been through quite the ordeal.

Laks: I walked to the fence. Houdini wanted to check me out, but as soon as he made a couple steps toward me, Chico pushed him back with his head and neck. He made it very clear that he wasn't to move.

I was looking into Chico's eyes, and he was looking into mine, and I just had this moment where we connected soul to soul. I had this feeling that they need to recover from this. They need to learn to forgive. We need to give them a platform where they can share their story, so they can connect and heal with humans that know what it's like to be that scared. That's when I looked back at Jay [and] said, "We need to open a Gentle Barn for them."

It took just over three weeks for the GoFundMe to raise $400,000 to do just that. One month later, Laks and Weiner settled on a property in Dittmer, an hour's drive southwest of St. Louis. On September 10, the St. Louis Six completed the final leg of their trip from the slaughterhouse to freedom. They trotted cautiously out of a trailer — a rental, not one owned by the slaughterhouse — and into a fifteen-acre pasture.

Adam Brewer: With Omar, I think, somewhere deep down in him, he was thankful. His stance was that they earned their freedom, as backwards as that is.

Susie Coston, Farm Sanctuary: I'm glad that they're doing well. I think, then, it was money well spent.

Sasha Monik: It's sad. They're a symbol, to me, of all the other animals who are forgotten and killed. But it's also hopeful, bittersweet. I'm happy they survived, but it's just five cows out of billions every year. It's a reminder to keep going.

Amie Simmons, St. Louis artist and vegan: I visited them; I don't know if I touched one — I just wanted to observe. When I painted them, I was focusing on the eyes and noses. I wanted them to be more realistic. I wanted everyone to see them as a cow, but everything else was a little bit abstract. We usually think abstractly about cows, about what we're consuming.

Laks: As soon as they arrived here at the Gentle Barn, we would make sure there were people in their pastures every single solitary day. Really, the clincher was when they were finally able to eat cookies out of our hands. That was them choosing to want to trust us. That's when we knew full recovery and forgiveness was possible.

Robertson: Chico is the leader; they all still respect him. But he doesn't boss them around. Houdini is the most zen; he enjoys just relaxing. Roo is a cookie monster, and he is constantly watching, and, like, obsessed with the dogs. Johnny is quiet, reserved. He's coming out of his shell. He's been asking for butt scratches.

Carson: I went to the one-year birthday party, and I got to pat Chico. I felt this connection, that I helped get his name out there. It was a funny experience, to be patting the head of this cow that I'd been chasing a year ago.

Buck Ford: I'm not an animal, but I think they pretty aware of where they were going. They probably had an idea, like, "We in here," that if they get the chance to get out, they get out.

Carson: It's a pretty good life. You know, to go from probably days away from a butcher's knife to living the best life ever for a cow. They're the luckiest cows that I know.