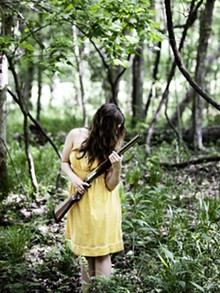 Click here to return to the rest of the RFT Summer Guide.

I'm standing in a field in Eureka with my cheek pressed against the butt of a shotgun, right eye closed, left eye focusing in the distance. A man stands behind me, waiting for me to call out the word that will signal him to send a fluorescent orange clay disc soaring. That's when the question arises:

What the hell am I doing here?

Growing up in the comfortable suburb of St. Charles, I was never exposed to guns, neither for hunting nor for protection. But what the heck — it's summer, and my inner hoosier is itching to be unleashed. What better way to embrace the redneck inside me than going out and, well, shooting stuff?

On my first outing, I take my lifelong friend (and fellow gun newbie) Crystal to an outdoor shooting range called the St. Louis Skeet & Trap Club (18854 Franklin Road, Pacific; 636-271-4210 or www.skeetrap.com), which is located about five minutes away from Six Flags. After we explain that we have no idea what we're doing, the staff at the club is more than happy to acquaint us with the guns.

The gun we get to use is a break-open shotgun. With this type, you have to flip a switch that makes the gun break at the beginning of the barrel, where you load the shell and snap the barrel straight again. It makes you look super tough. And shotgun shells, I learn, are actually cylindrical canisters filled with hundreds of tiny pellets. With the shells we're using, the pellets are supposed to spread to a 30-inch radius. So if our shots are anywhere even remotely close to the target, the target will break.

Trap and skeet are two different sports, although both involve aiming for those soaring clay targets, which resemble small orange Frisbees. In trap shooting, the target is shot away from you, whereas in skeet shooting, the target is shot from side to side. Both conceptually seem easy enough. It's just like Duck Hunt, right? As I will learn in the next few hours, however, things get a bit more difficult when you have the eyesight and aim of a 90-year-old man.

But I'm getting ahead of myself.

Pat then teaches us how to hold the gun. The end of the stock is supposed to be nestled into the little nook just under my collarbone, right above my armpit. Not only is the gun heavy, but between kickbacks from shooting (which aren't as bad as I expected) and removing the gun to reload after each shell, I guess the gun must have, you know, slipped. Either way, I'm not holding the gun right — and I'm left with the bruises to prove it.

After all the prerequisites, we get to start shooting traps. I load a shell into the barrel and snap the gun shut. I get situated with the gun and look out toward what resembles a submerged baseball dugout. Inside, the mechanism that releases the targets oscillates from side to side, so each time a new target is released, it comes out of a new area. I take my aim and yell, "Pull!" to Pat, who presses a button that releases the clay target. Closely following the disc as it flies into the field, I pull the trigger, and...

This continues for the next fifteen shots — following the target and missing, and then missing again. I console myself by thinking no one hits targets the first time they go shooting. So I let Crystal take over and, much to my dismay, she hits almost every target. So I just suck.

When we finish off our box of 25 rounds, Pat takes us over to start skeet shooting. (In the neighboring trap-shooting area, five high school kids are taking turns calling out, "Pull!" and destroying every target in sight. These guys — and girls — are serious. Pat informs us that these shooters are with a collegiate Olympic league.)

Skeet shooting, fortunately, is a lot easier than trap shooting.

In this game, the targets come out of buildings on either side of the shooting area. Depending on where you stand, the targets are either shot toward you or past you. I have no idea what I do differently, but I probably hit two-thirds of the targets coming toward me. But still, Crystal, a regular Annie Oakley, beats me again.

No matter. A little success is enough, and the following weekend I go shooting again. This time, I go with two coworkers, Matt and Paul, who have also never shot before. Their friend Danny owns a few guns for hunting and has some property around O'Fallon.

This time we're shooting at paper targets stapled to a wooden board, so it's a lot less discouraging. (And though this scenario sounds sketchy, I assure you Danny is an experienced shooter and teaches us a lot about gun safety and etiquette.)

I shoot four different guns this time around, all with calibers that mean nothing to me — a .22-caliber rifle that was pretty easy to aim and shoot, a .22-caliber pistol that makes me look and feel like Kate from Lost, a 12-gauge shotgun, and an unnecessarily loud and ridiculous 30.06-caliber rifle that requires bullets that cost $1 each. According to the bullet holes in the targets, I'm not too terribly bad with these guns, especially the rifle and pistol. They aren't exactly bull's-eye shots, but at least I'm hitting something.

Anyway, the boys, who are more concerned with blowing up golf balls and soda cans, came in with low expectations for my shooting. Because anything girls can do, boys can do better, right? In reality, I'm at least as good (if not better than) both Matt and Paul.

And after two weekends of shooting guns of all sizes, I think it's safe to say that this girl from St. Charles is now a bona fide badass. It's totally worth it, too. Not only is shooting a fun new experience, but it's also pretty cheap. Even if you don't have a friend who lets you shoot for free, some ranges are really convenient for amateurs — they allow you to shoot without a license, have affordable gun rentals (around $5) and bullets. Really, it's cheaper than a case of Miller and a bag of White Castle.

You have no excuse not to try shooting at least once this summer. Your inner hoosier demands it. 