Fire Shut Up in My Bones Fails to Ignite as Opera

Fire Shut Up in My Bones

By Terence Blanchard and Kasi Lemmons. Directed by James Robinson. Conducted by William Long. Starring Davóne Tines, Karen Slack, Julia Bullock and Chaz’men Williams-Ali. Presented by Opera Theatre of St. Louis through June 29 at the Loretto-Hilton Center (130 Edgar Road; www.opera-stl.org).
Jazz musician Terence Blanchard has become a frequent visitor to St. Louis in recent years as an in-demand composer for both Metro Theater Company (Bud Not Buddy) and Opera Theatre of St. Louis (Champion). Blanchard’s new “opera-in-jazz” for OTSL, Fire Shut Up in My Bones, features a libretto by screenwriter Kasi Lemmons and is inspired by New York Times’ columnist Charles Blow’s memoir of the same name. It’s a tale of parental neglect, sexual abuse and revenge, set largely in the dead-end town of Gibsland, Louisana.

How does a “boy of peculiar grace” survive the grim realities of poverty, violence and his own overwhelming uncertainty about what sets him apart from everyone else? I’m not sure. Despite several moving performances and some beautifully staged scenes, Fire Shut Up in My Bones never really ignites. Blow grows from a young boy to young man and endures various cruelties along the way, but the source of his discontent is never disclosed. As a result, the opera feels like it ends rather than concludes. Blow proclaimed his bisexuality in his memoir, which is the missing piece of the opera. If you’re aware of that going in, the show gives you all the points with which you can connect the dots. Yet there’s no mention of that in the libretto. The fact that an opera about a bisexual man making its world premiere during Pride Month elides that identity is odd, to say the least.

Bass-baritone Davóne Tines plays the college-aged Charles, who opens the show on the road back home from college, rusty pistol in hand. He’s racing back to kill a man, and then sets his pistol down on a block at the front edge of the stage. It remains there, harshly lit by its own spotlight, while he remembers his childhood and how he got to this night. 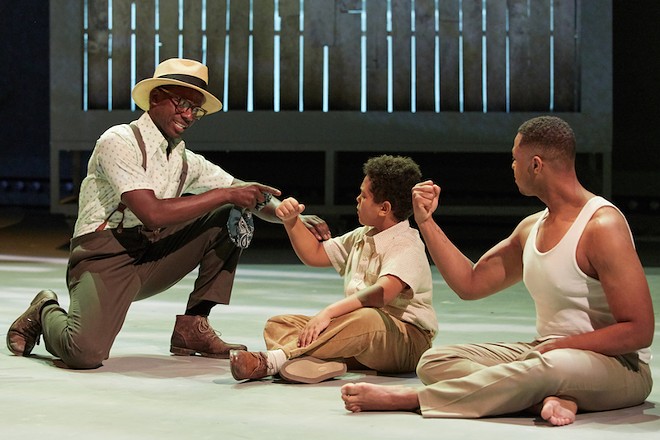 ERIC WOOLSEY
Jeremy Denis (center) and Davóne Tines (right), with Michael Redding, portray columnist Charles Blow at different stages of life.
His younger self, Char’es Baby (a young Jeremy Denis), chafes under the coddling of his mother and every other woman in town. Chare’es Baby is sensitive and thoughtful, and he aches for more attention from his overworked mother, Billie (Karen Slack). Tines’ rich voice gives this child’s yearning for love a long-gestating depth of feeling that goes unheard. His mother is exhausted from her factory job, tending five boys and chasing down her shiftless husband, Spinner (the very charming Chaz’men Williams-Ali).

It’s Williams-Ali who gets the first great song of the night, in the bluesy showstopper “Lord Love the Sinner in Me.” Williams-Ali tears through it with a rogueish smile, bringing a little joy to Gibsland — but not to his wife or children, who wait at home while Spinner drinks away Billie’s money. Billie catches him in the early stages of flagrante and leaves him, moving in with her brother, Char’es Baby’s Uncle Paul (Michael Redding).

It’s there that cousin Chester (baritone Markel Reed) comes to visit, and befriends Char’es Baby. In their shared room, Chester sexually abuses his unwitting cousin, while singing that everything is “Sweeter Stolen.” (Reed’s performance is so compelling and convincing that the audience booed during his curtain call on the night of the premiere.) Director James Robinson sits Reed and Denis on opposite sides of the bed undressing, while Tines perches on the foot of the bed, unable to relive the moment. All three performers are excellent, and the scene is horrific in its inevitability. In the aftermath, Tines sings of a shame he doesn’t understand to his unlistening mother while Denis’ blankly staring face is projected behind them on a large screen. It’s impossible to make eye contact with this ghostly Char’es Baby, who has lost something he can not name.

Soprano Julia Bullock personifies this loss, haunting teenage Charles in his quieter moments. In an abandoned house, she sings to Charles that she is the loneliness that will always be with him. It is perhaps the most Southern Gothic moment in an opera packed with woe and nightmares, and together Bullock and Tines scale every shadowy height in it.

Sadly, the second half doesn’t reach these crepuscular heights. One problem is Blanchard’s score, which for the most part never rises above the typical incidental music you hear in film. Another is the story. In the second act, we return to the opening moments, but go no further. College-age Charles draws the pistol from its spotlight and into the action, but follows his mother’s example and foregoes violence. As a real-life choice, that’s a good thing. But within the story, the audience only feels frustration that Charles doesn’t get closure with anyone. Does his mother ever learn what happened to him? Does Loneliness still shadow him? Does he know yet what it is that sets him apart?