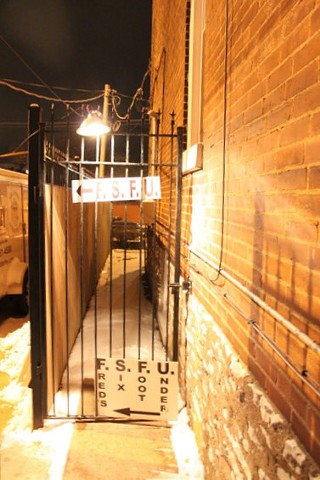 Fred's Six Foot Under has the feel of a private club, albeit one where you enter through the kitchen of the restaurant upstairs, the mystery of food preparation garishly laid out under fluorescent lights. But there's nothing garish about the confines below: It's a musical oasis where cramped quarters make for fast friends. The Chippewa Chapel Open Mic night every Thursday is almost, but not quite, as legendary as the bar's namesake and affable bartender, Fred Friction. Iron Barley lent him its basement after Friction's bar Frederick's Music Lounge closed in 2006, and the rest is history. The teeny room only holds 30 people amid its collection of mid-century flair and pop-meets-folk art, but a small sign above the stage reads "Chapel," letting you know you've found the perfect synthesis of unlikely characters, awesome tunes and booze - a sacred combination.