We talk with the Old 97's, turn up the freedom rock and marvel at Wilco's PR machine 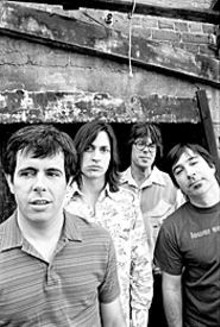 After recording and touring behind Satellite Rides in 2001, the four members of the Old 97's took a break. They took a break from recording to work on side projects, to marry their sweethearts, to have children. They took a break from the road and returned home -- for guitarist Ken Bethea and drummer Philip Peeples, home's still Dallas, Texas, but lead singer Rhett Miller now resides in upstate New York and bassist Murry Hammond lives in LA.

The break is over. The Old 97's have recorded a new album, Drag It Up, a stripped-down, sparkling LP set for a late-July release date. The band is going on the road again, and the first place it's stopping is Mississippi Nights (Thursday, July 1). How'd St. Louis get so lucky? Rather than speculate, we called up Ken Bethea, who got us up to speed on the band, the tour and what it's like to sing in front of Bun E. Carlos.

The Riverfront Times: Why start the tour in St. Louis?

Ken Bethea: We often start tours or end them in St. Louis. When we got started, the first city outside of Dallas that took to our music was Chicago. The second was St. Louis, and we used to go there and play Cicero's. The very first time we played [at Cicero's], we were opening for somebody else, just a typical gig. There were like thirty people in the place, and we sold twenty CDs. It was crazy; we normally sold maybe two CDs. We were very excited: "Wow, man! We went to St. Louis and we sold twenty CDs! Yay!" We went back a month later, and Rich Byrne [then a senior editor at the RFT] wrote a huge piece on us. He'd been there that night, and he just said, "This alt-country thing is startin' to shake, and this is a kickass band."

This is the first time you've sung lead vocals on a track ["Coahuila"]. Are you going to sing it live?

Oh, yeah. We started singing it live on the last tour. When we sang it in Madison, [Wisconsin], Bun E. Carlos [from Cheap Trick] was there -- and I'm just sitting there going, "Oh, fuck." We'd practiced it three or four times. We had some friends there, and [before the show] we went out to eat, drank wine, and I'm tellin' my little stories. When we walked onstage, I looked down at the setlist, and five or six songs down it said "Coahuila." My blood turned to ice. I didn't know if I could hear myself sing, and sure enough, I couldn't. I didn't know how loud to make my guitar. The song came from a side-project band that me and [drummer] Philip [Peeples] had while Rhett was doing his solo record. But it was an acoustic song, not electric -- so it was quiet, kind of, and I could hear myself. It is not quiet onstage at an Old 97's show -- it's loud, there're guitars everywhere, so I'm like, "Oh no!" I got by, but it took me four or five gigs before I wasn't fretting all night long.

You all sound great on the album. The Old 97's have always struck me as a very democratic band.

We're the only band our management's ever had that makes them do everything diplomatically. They have to take a vote on everything -- it runs 'em crazy. It's good overall, but at times things get bogged down in bureaucracy. Trying to find a video treatment has always been tough, because Rhett's always gone for the fade-in-to-the-lead-singer-looking-off-at-the-moon shot, of course, and I'm always for the four members of the Old 97's wearing bowling clothes and diving into a pile of cotton candy.

He just got into it, just got into the new record. One night I heard him singing one of our new songs, "Moonlight": "Why is this haaappening to meeee?" [laughs] And I'm thinking, "Oh God, not Little Rhett Miller whining in the other room." Audie loves "Smokers" and he loves "Coahuila." He likes the fast songs. Come on out to Mississippi Nights -- we'll do those right. -- Brooke Foster

News Judo
They say there's no such thing as bad publicity, and St. Louis-rooted Wilco seems desperate to prove the point. This week the band settled out of court with Irdial-Discs, an English music label that claims that Jeff Tweedy and the gang's Yankee Hotel Foxtrot illegally sampled a snatch of radio chatter that came off of Irdial's Conet Project. Well, these things happen, but it's the timing of the announcement that raises eyebrows: It came out the same week as Foxtrot's follow-up, A Ghost is Born.

This is just the latest in a swath of pieces of news that seem negative at first but still serve to build the band's myth. The most famous example is how the band twisted getting kicked off their record label into the publicity coup of the year. You can catch a lot more examples in Greg Kot's new biography of the band, Learning How to Die (see this week's Performance page to learn more about Kot's book), but even the past few months have been suspiciously full of Wilco fodder. Let's review:

In March A Ghost is Born is leaked on the Internet, months before the release date. Does the band go bankrupt as people steal its music? No, thousands of fans sign online petitions promising to buy the album when it comes out.

In April the band announces that it's canceling a large chunk of its tour so that Tweedy can enter rehab. The result? Admiring stories in national publications about what a strong junkie the man is.

Now Wilco is settling out of court and losing its dates on the now-cancelled Lollapalooza. Look out for Tweedy to get declared Man of the Year. -- Jordan Harper

Freedom Rock
Patriotism, in the words of Samuel Johnson, is the last refuge of a scoundrel. And you are a scoundrel. The Fourth of July weekend brings a rash of downtown concerts with heapin' helpings of America-love, so you have plenty of shows to take shelter in this week. But what red, white and blue shows to hit? Well, that just depends on what kind of patriot you are.

Red-blooded Americans, people in favor of keeping the devil out of Georgia

In short: Country music's Ted Nugent, Charlie Daniels doesn't keep his politics in the closet. Just check out the lyrics to the post-9/11 ditty "This Ain't No Rag, It's a Flag": "You're a coward and a fool/And you broke all the rules/And you wounded our American pride/Now we're coming with a gun/And we know you're gonna run/But you can't find no place to hide."

In short: Freedom never dies, and neither does the career of Alex Chilton, who's had successful runs as a member of the Box Tops and Big Star and also as a solo artist. An inspiration in these troubled times.

In short: Dada is still riding the wave from its 1992 hit "Dizz Knee Land," which might be spelled funny to avoid the wrath of a litigious mouse but still carries the name of that ultimate refuge of the American Dream.

"Can't we all just get it on?" idealists

In short: The man who brought us the theme song from Shaft knows that we can all put aside our problems and get together, one way or another.

"Massachusetts liberals," if you know what we mean

In short: This queer-feminist band visiting from New York ought to provide a refreshing change of pace for those looking to escape the usual rah-rahing of the fireworks set.