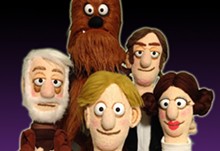 When: Sat., Aug. 6, 2:30 p.m. 2016
Price: $5
Puppets in the American consciousness range from the Muppets to Crank Yankers, with very little in between. But puppets were the original mass entertainment in the pre-literate era. (Punch and Judy's brutal escapades were the Big Bang Theory of the Middle Ages, after all.) The Great Regional Puppet Festival offers you the opportunity to see many types of puppets engaged in a variety of shows. Mike Sandbank's Shadow Factory presents the mostly non-verbal performance Still Life at 2:30 p.m. at the Saint Louis University Theatre (3733 West Pine Boulevard; www.puppetfestivalstl.org), using shadow puppets to relate the struggles of a group of people dealing with a world that doesn't bend to their will. Mike Horner's A Funny Thing Happened on the Way to the Death Star follows at 3:15 p.m. Musician Curt Bright imagined what Star Wars would have looked like with puppets instead of pioneering special effects, and puppeteer Mike Horner brings Bright's fever dream to life. Admission to both shows is $5.
— Paul Friswold