State Representative Brian Seitz was called by God, in his telling, to serve in the Missouri General Assembly.

Some 77.5 percent of the voters in the 156th House district elected him in 2020. But "God opened the door to the statehouse," Seitz says.

The Branson Republican has been a man on a mission is support of causes traditionally associated with God. Say, like Jesus cracking down on the expansion of health care to poor people.

Seitz was most recently in the news for refusing to apologize for repeatedly calling COVID-19 the "China virus." The apology had been suggested in a House committee meeting by fellow representative Shamed Dogan, R-Ballwin, who had succinctly observed Seitz's hypocrisy about race.

Seitz has authored a bill by which Big Government in Jefferson City would dictate to all public schools in Missouri that they could not permit the teaching of any content that might be seen as holding people of a race responsible for the actions of others of their race. Dogan suggested that was precisely what Seitz was doing with his racism against Chinese people because, well, he was.

It happens that Dogan is the lone Black Republican in the legislature. It also happens that Seitz's awful bill is just a front for his role in "leading the charge" against critical race theory. In Missouri, CRT is not an actual thing in education, but it's a big thing in politics.

Unlike most dog whistles which animate contemporary Republican rhetoric, CRT is a bullhorn. Stopping the spread of CRT means combatting the scourge of white people losing their majority control of America.

CRT is one of the big guns in the national culture war. The prospect of racial Armageddon alarms many Caucasians as much as creeping Communism ever did.

In that context, who cares that CRT is just a dreadful idea to be avoided as opposed to a reality in Missouri?

So, it shouldn't come as a surprise that Seitz didn't take his scolding by a Black guy all that well. Seitz took the rather unusual step — maybe unprecedented — of coming on conservative talk radio 250 miles from home to attack the socially conservative Dogan as a "leftist" who launched a "cancel culture attack."

Seitz was a guest last week on the Marc Cox Morning Show on 97.1 FM — Bob Romanik being presently indisposed — to impugn Dogan's motives (he persisted in mispronouncing his name "Doogan"). It must be presumed that Seitz didn't do this because Dogan is Black. Well, except by me.

In any case, here's my favorite bite from the interview, which apparently escaped further notice:

"There are those who participate in identity politics, and it's quite possible that Representative 'Doogan' identifies as a Republican and he needs to show himself to be slightly different because of the campaign he is running for St. Louis County Executive, and he was trying to build a base that he obviously doesn't have by throwing a fellow Republican under the bus."

Welcome to the new Republican Party. Dogan is completing his term-limited eight years in the House as one of its most respected members across party lines. And I say that as no fan of most of his political stands at the state level. Dogan is collaborative. Seitz probably wants an investigation of collaboratives.

The unknown freshman legislator with no political experience or portfolio feels empowered to dismiss the long-serving stalwart so dismissively. In fairness, Dogan is Black.

The soft-spoken Dogan is truly the polar opposite of Seitz, a vocal extremist who has for the second time authored a bill that would allow Missouri lawmakers the power to block executive orders from the President of the United States. Now there's a fine idea for secessionists to mull over.

That thing of course didn't even make it to a committee hearing last year and likely won't again. Neither will the newest one from Seitz, a measure "to stop the president from using the Missouri National Guard without a declaration of war from Congress."

Well, of course not. We certainly wouldn't want a repeat of President John F. Kennedy's tyranny in Alabama in the early 1960s. 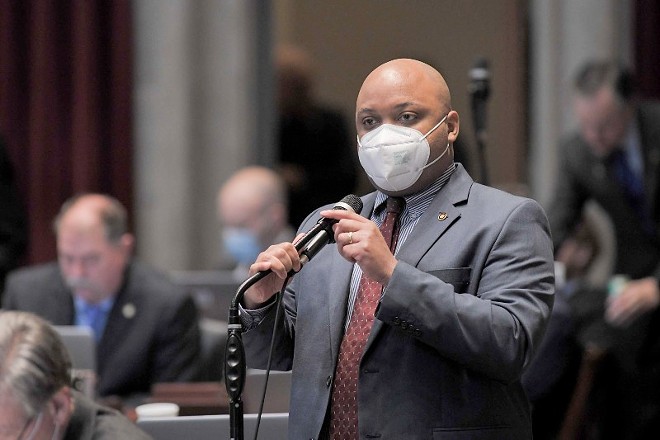 That said, Seitz is tragically a better fit for today's Republican Party than Dogan. And Seitz is especially well positioned to carry forth the banner of white people given that he represents Taney County, which comprises pretty much his whole district.

Taney County is 93.5 percent white and 1.8 percent Black as of 2020, according to the U.S. Census Bureau. Those numbers speak for themselves.

But it doesn't follow at all that hailing from such a comfortably Caucasian place makes one insensitive to racial justice and equity. It most certainly does not.

What one really needs to champion CRT angst in the modern era is both a natural affinity for white people — and empathy for white plight — and a willingness to demonstrate a little flexibility with the truth. After all, CRT doesn't exist in Missouri public schools K-12, so to lead a passionate charge against it would be tough for someone mired in truth.

I don't know much about Seitz, so I visited the official House website to read his bio. It states the following:

"In addition to his legislative duties, Seitz has served as the pastor of Sovereign Grace Baptist Church in Branson for 12 years."

Now, that's fine credential, so I thought I'd visit the church website. Funny thing, not only does such a thing not exist, but there is no Sovereign Grace Baptist Church publicly discernible in Branson. One with the same name can be found some 30 miles away in Springfield, but there's no reference to Brian Seitz on its website.

An official of that church emailed me that "Brian did attend our Church for a short period of time but never joined nor was he a pastor of our Church."

So, I contacted Seitz, who commendably was prompt in his response.

"Sovereign Grace Baptist Church of Branson is no longer meeting. For about 7 years we rented the all-purpose room at Roark Health Club, until the building was purchased by a Time Share. We then began to meet for the next few years in our home. The group had aged, and with the onset of the pandemic, we met less frequently and made the decision to finish, as God had opened the door to the Statehouse and my term as a Representative.

"Yes, it was a church, and yes, I was the pastor, I've taught the Bible for over 30 years. Most Baptist churches are independent (Southern Baptists coordinate for missions)."

I don't know my Baptist churches. I've been in many private homes where people prayed. We called those gatherings "poker games." But to each his own.

And unlike Seitz, I have a longstanding policy of not speaking for God. She's never given me a green light to do so. But that isn't to say Seitz might not have been called by God.

I'm just wondering if it was a wrong number.