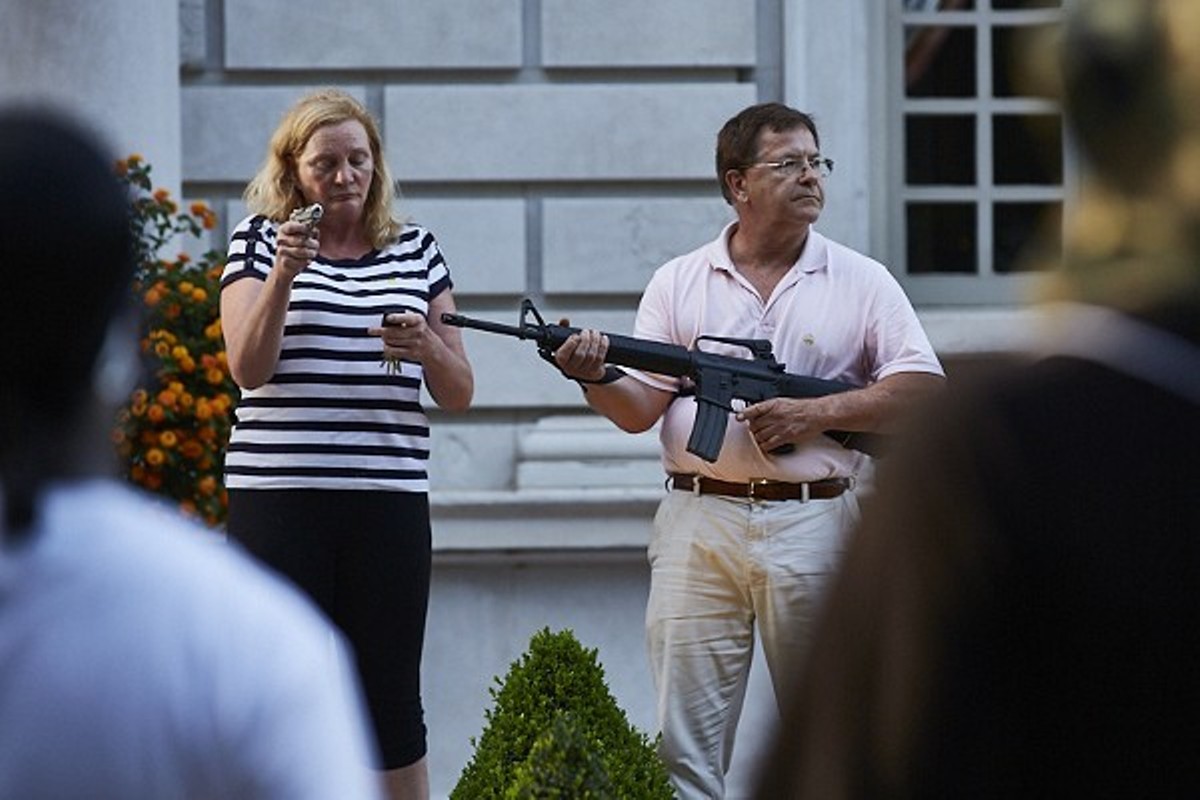 Hey, everyone, what about Mark and Patricia McCloskey?

Can't you see the poor couple over there frantically waving their legal pads for attention? It's so pitiful that these vile, rotten bottom feeders are being shunned from the spotlight right at the time they're trying to do their patriotic best to inflict some more vile rottenness upon St. Louis and — certainly they hoped — the nation. Does anyone do pity anymore?

Sadly for them, there was barely a murmur when the St. Louis Post-Dispatch reported last week that Mark McCloskey is the attorney suing Villa Duchesne High on behalf of a white high school senior claiming she was the victim of racial discrimination. Imagine the McCloskeys' disappointment when no one cared.

To be sure, there is some news value — just for its bizarreness — in someone advancing the notion that an exclusive, respected and mostly white Catholic girls' school in west St. Louis County has gotten itself into the business of discriminating against Caucasians. Those words were difficult to type with a straight keyboard.

But contradictory as it may seem, we ought to pay a little attention to these waddling lawyer jokes in the context of the lawsuit filed against Villa. It is just so revealing of who they really are.

When the world first had the misfortune of discovering the McCloskeys — and as we recoiled in horror at the preppy white-fashion tragedy that was arguably as scary as their guns — it was not clear what made these people tick. They were just your garden-variety mansion dwellers next door brandishing firearms at Black people carrying signs on their street.

As details have emerged over time, many of us have come to see them as deserving of the criminal charges filed against them by St. Louis Circuit Attorney Kim Gardner for unlawful use of their weapons. Others view them as citizens rightfully protecting themselves and their property from a perceived threat.

There's a court system to sort that out. The McCloskeys have top-flight legal representation in attorney Joel Schwartz, who succeeded in getting Gardner knocked off Mark McCloskey's case. And the couple has a right to be presumed innocent until proven guilty. It turns out that, as supporters of departing wannabe-dictator Donald Trump, they are also entitled in Missouri to pro bono representation by state Attorney General Eric Schmitt who attempted to have the case dismissed on their behalf.

That was unusual, but actually not as freakish as Governor Mike Parson declaring they would be pardoned, no matter what the evidence showed and no matter what some stinking judge or jury might decide. Why? Because Donald Trump's the dang president, by God, and that's how we roll.

What's easily forgotten is that in the immediate aftermath of their Sunday afternoon moment of infamy, the McCloskeys' attorney at the time, Al Watkins, stated that the couple "have fought for the civil rights of clients for decades and support the Black Lives Matter movement," according to a KMOV report.

"You couldn't have gone to central casting and asked for a more elegant home that will represent white entitlement," said Watkins, admitting the optics are bad.

But for good optics, Patricia McCloskey offered this:

"We are Black Lives Matter people; it's just the way they came in and were so aggressive," she said, speaking off camera, according to KMOV.

Now, it seems that the "Black Lives Matter people" have turned out to be "White Rights Matter people," too. I suppose I should be grateful for that as a Caucasian who — like so many others of my race — have endured a lifetime of oppression based upon the color of my skin.

But maybe not so much.

In a strange way, the lawsuit filed against Villa by Mark McCloskey is more revealing than the Victimization Victory Tour the couple rode to glory as stars of the Republican National Convention last summer. At the convention and in right-wing media moments, the two came off more like Dog Whistle People with regard to race but stayed pretty much within the normal boundaries of Republican talking points.

Still, nothing says "this caucus is for us Caucasians" better than the way Mark McCloskey chose to portray the Villa case in the media. Mind you, this wasn't a case of saying that he was simply representing a high school senior with a righteous grievance. No, McCloskey was really forthright about what was driving the case.

"The goal is to stop the indoctrination of students with this critical race theory and to also make the community aware that even at Catholic parochial schools, this bizarre, racist, anti-racism is being force fed down the throats of their children," McCloskey told the Post-Dispatch.

Now there's something to unpack. First of all, thanks for the heads-up about the bizarre, racist anti-racism. Lots of us have long suspected that wealthy private schools in posh suburbs secretly held deep resentments toward us white people. We've never quite been able to document it until now, but this does seem like a good start.

For those of us disinterested in actually reading any McCloskey lawsuit — a percentage of the population roughly equal to "everyone" — the white-rights champion provided a fine perspective with which to regard the claim on behalf of his white high school client. It is that school officials discriminated against her by siding with Black students who called her a racist, accused her of saying "Black lives do not matter" in class, and threatened to attack her because of it.

It also gives us a pretty good idea what to think of the claim that the private Catholic school in Frontenac discriminates against white students "by encouraging and facilitating race-based aggression" by Black students, unfairly disciplining students based on race and encouraging "the concept that all Caucasians are racist by virtue of being Caucasian."

Yes, at long last, someone to give voice to the oppression of us white people after centuries of our having been targeted with discrimination, aggression, unfair discipline and false charges of racism.

Just when we were about to lose all hope that there ever could be racial justice in the world, here come the McCloskeys to save the day.

What a coincidence. White-rights racial warrior Mark McCloskey just by chance invoked the same wonderful civil rights philosophy as Trump, "the least racist" president of all time. What's more, we learned from the story that the McCloskeys' own daughter, now 31, is a graduate of Villa.

Or maybe that should read "survivor" of Villa, presuming, if we may, that she's white.