Hartmann: Missouri Republicans Risk Spreading COVID-19 Because They Can 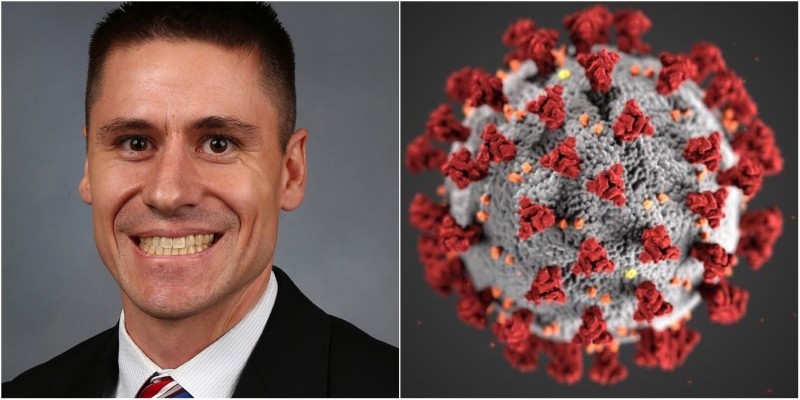 Rep. Andrew Koenig said it was his right to risk catching COVID-19, and then he did.

Last Wednesday, state Senator Andrew Koenig, R-Manchester, attended a committee hearing — wearing no mask — in Jefferson City. The focus of the hearing: to restrict local government health measures related to COVID-19. Koenig also has sponsored a bill to minimize the liabilities of Missouri companies during the pandemic.

This, of course, would be the same Andrew Koenig who infamously proclaimed, “It’s my choice if I want to risk getting COVID. No one is forcing anybody to stay home.”

Ergo, Koenig has contracted COVID-19. His announcement last Thursday was greeted privately by some “What did he know and when did he know it?” rumblings among members of both parties. That subject will likely remain unaddressed.

One thing, though, is certain: In having exercised his choice, Koenig exposed countless others and their friends and loved ones to the prospect of becoming extremely ill or dying from the virus. That subject won’t be addressed either.

The virus has killed more than 420,000 Americans at this writing, including some 6,900 souls in Missouri, a grim statistic that might be understated as much as the state’s reported case count of 476,000 surely is. Missouri is one of just twelve states with no mask mandate, a badge of honor for Governor Mike Parson who, along with his wife, contracted the virus but survived it.

Like Parson, Koenig has burnished his personal freedom to contract and spread the virus. After doing so, he had the audacity to issue the customary statement to assure the world that he’s just fine: “I am self-isolating after I have tested positive for COVID-19. Fortunately, I am experiencing mild symptoms. Out of an abundance of caution, I will be quarantining at home for the next 10 days. I look forward to fully resuming my duties for the people of St. Louis County soon.”

It’s indeed fortunate that Koenig has only mild symptoms, although that’s how the disease started out for a lot of people not fortunate enough to have lived to tell. Everyone hopes his symptoms stay mild and then go away.

But Koenig’s reference to “an abundance of caution” redefines obscenity. What about those whom Koenig might have infected through his “absence of caution”? What if they’re not so fortunate to have only mild symptoms? We won’t be hearing about them.

Now that he’s infected, the world can truly appreciate Koenig’s ironic choice of “choice” in the context of COVID-19. Koenig fancies himself as the ultimate “pro-life” politician in Missouri in fighting to obliterate women’s constitutional rights to abortion. As reported here previously, he would force women and young girls to bear the children of their rapists in the name of life. But he reserves to himself the “choice” to contract a deadly virus and, by definition, spread it to others, without regard to their lives.

As a champion of the unborn, perhaps Koenig should review what the Centers for Disease Control and Prevention has to say about COVID-19 and pregnant women.

So much for that crusade.

Koenig is hardly alone in his heartlessness and stupidity. The Republican Senate leadership, which has refused to allow virtual testimony to committee hearings during the pandemic, was totally nonplussed.

“The Missouri Senate is planning to be in session next week as scheduled. We are following CDC guidance relating to ‘close contacts’ and contact tracing recommendations,” tweeted Senate Majority Leader Caleb Rowden on Friday. “I encourage my colleagues to follow safety recommendations (social distancing, mask wearing, etc) so that we may continue to do the work of the people of this great state.”

Those tweets, too, should be read with an abundance of caution. It’s not clear on what planet the CDC would advise legislators to return to business as usual — masks optional — four days after a prominent member contracted the virus. Especially since the person and his colleagues take such joy in refusing to take precautions on the Senate floor or elsewhere.

The unspoken message is clearer than the tweets: “We’re tired of hearing about this virus. We’re keeping our freedom. Deal with it.”

Rowden acknowledged with his statement that “social distancing, mask wearing, etc” are “safety recommendations” that people ought to follow. Really? Like stopping at a school crossing rather than mowing kids down with your car?

This is a once-in-a-century global pandemic, not a fire drill. Any public official who traffics in phrases such as “encourag[ing] my colleagues to follow safety recommendations” should be encouraged to follow another career path.

It is just astonishing. The same politicians who leap to the vernacular of personal responsibility in justifying a failed drug war, demonizing poverty and otherwise waging culture wars can’t seem to comprehend the meaning of “infectious” as part of the phrase “infectious disease.”

There was not so much as a syllable in either Koenig’s or Rowden’s pronouncement — or any others — showing an ounce of concern for anyone who might have been exposed by Koenig. He had defiantly sauntered about the state capitol without a mask — like so many of his Republican colleagues — and this was no time to acknowledge any concern for those who might have been impacted.

Why not? Well, there’s this thing called liability, sort of the flip side of personal responsibility. It’s probably not a great idea to connect the dots publicly between one’s choice to risk contracting disease and any adverse impact on others that might result from that choice.

It is with a mountain of irony that Koenig was busily toiling to limit companies’ COVID-19 liability on the day before he announced his own diagnosis. What a perfect way to say that, in the name of his freedom, “You’re all on your own, folks!”

In its testimony before the committee seeking to shield nursing homes and others from liability, an AFL-CIO union representative said:

“Over the last ten months, Missourians of all walks of life have stepped up to the plate. Health-care workers have worked excruciating hours, sometimes with inadequate PPE, to save lives. Grocery workers have shown up to work to interact face to face with hundreds of customers daily to keep us fed. Factory workers have stood shoulder to shoulder on assembly lines to keep our economy moving. Teachers and children alike have made tremendous sacrifices and have worked extra hours to continue education while keeping families safe. First responders have walked into homes to transport dangerously sick Missourians to medical care, knowing full well they’re being exposed to a potentially dangerous virus.” The union rep then reminded legislators that whenever these heroes have asked for help — mask mandates, economic relief, hazard pay, more PPE and the like — “they’ve all been told by their government that the answer is to take personal responsibility.”

Yes, they have. The union rep wondered aloud how the state’s first major COVID-19 bill could possibly be focused on protecting companies from liability for misdeeds.

Jump to comments
Tweet
Email
Print
Share
« Hartmann: A Tale of Two Congresswomen   |   Hartmann: The Right to Mow Down Protesters Is Just a Start »