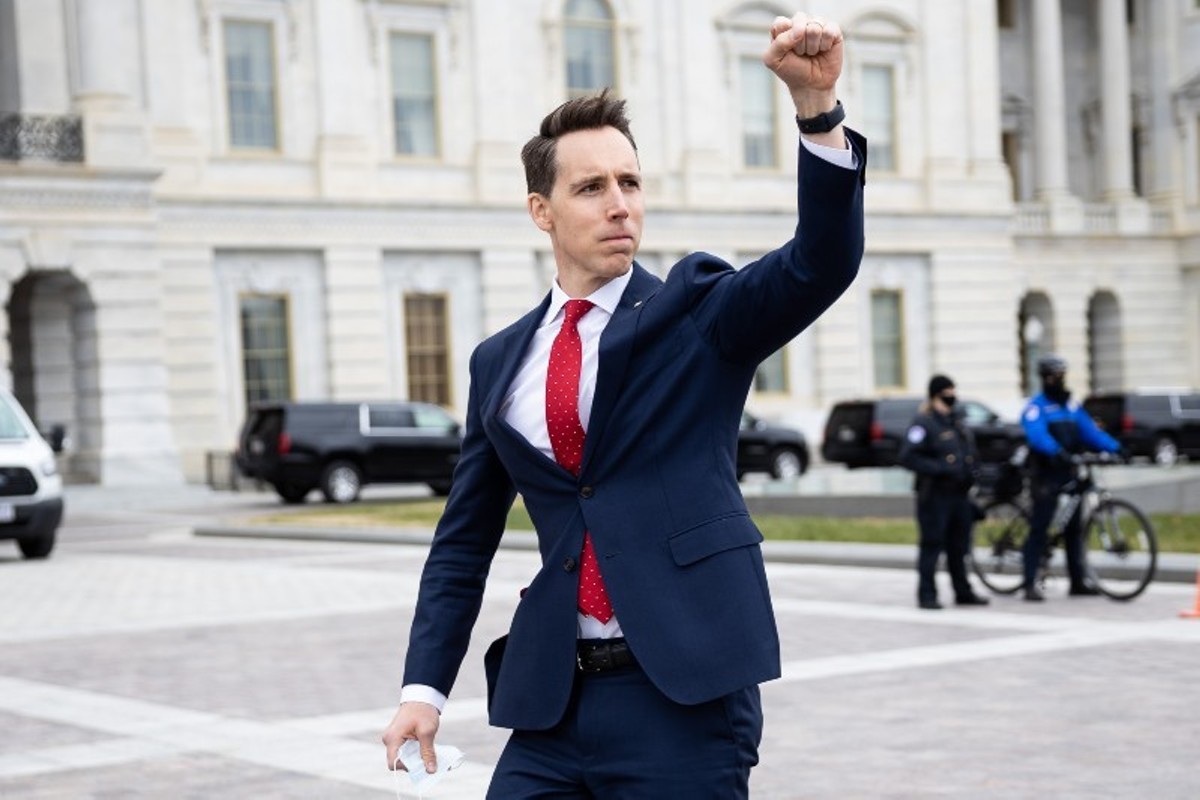 Sen. Josh Hawley (R-Mo.) gestures toward a crowd of supporters of President Donald Trump gathered outside the U.S. Capitol to protest the certification of President-elect Joe Biden's electoral college victory on Jan. 6, 2021. Some demonstrators later breached and stormed the Capitol.

Were you paying attention in 2021? Let's test your knowledge.

10 correct answers: You need to find something other than the RFT to read.

8-9: You're probably a radical socialist who hates America.

6-7: You haven't lost your touch since high school.

0: This quiz was a conspiracy to destroy your mind. You got us.

1. On July 12, the RFT reported "Greitens Tries Desperately to Duct Tape Himself to ___ at Missouri Rally." Fill in the blank:

A. His new hairdresser

B. His old hairdresser

2. On January 4, an RFT headline read, "An Act of Treason By and For Josh Hawley." How did we know that two days before the Capitol insurrection?

3. "These were just very angry, defiant, very violent people that we house." Who was then-St. Louis Public Safety Director Jimmie Edwards referring to?

A. Members of the St. Louis Police Officers Association.

C. Rams fans looking for Stan Kroenke at the courthouse.

4. Attorney General Eric Schmitt stated the following in a lawsuit: "The science shows that school mask mandates are arbitrary and capricious." In which RFT story was that cited?

C. "Eric Schmitt Would Kill to Be Your Senator"

A. Secession from the Union

A. Respect the Hustle

B. Hire Them for Special City Events

C. Give Them Tax Credits

7. Teacher John Wallis resigned from his position at Neosho Junior High School after he displayed a rainbow flag behind a sign reading "Everyone Is Welcome Here." What happened?

A. The kids liked the part about showing respect to everyone

B. An angry parent complained he was trying "to teach kids to be gay"

D. All of the above

8. When Governor Mike Parson's Department of Health and Senior Services produced a study that found that mask mandates worked, Parson did what?

A. Publicly stated, "I'm sorry for being so wrong about the dang masks"

B. Issued an executive order saying that local school boards should be respected if they issued mask mandates to protect their students

C. Demanded that reporters carrying the story be investigated by the Missouri State Highway Patrol

D. Refused to let the study come out publicly

9. Who flipped off a loud crowd of angry anti-maskers at a St. Louis County Council meeting?

10. When St. Louis County Police Chief Mary Barton stepped down under fire from her post in July, whom did she thank?

B. The Page administration for agreeing to give her a $290,000 settlement of her sex-discrimination claims.

C. The Black community for finally coming to realize that there was no systemic racism in the county Police Department.

D. The men and women of the police department.

Jump to comments
« Hartmann: Time to Divvy Up the NFL Bounty — What Could Go Wrong?   |   Hartmann: Missouri Cancels COVID-19 »