Have A Cow Is Serving Delicious Food — With a Mission

Steve St. Pierre will never forget the reactions from the people in his circle when he told them that he was leaving behind his home in Edwardsville, Illinois, and moving his family to north St. Louis. Instead of quizzical looks, questions about his motivations and plans, or words of encouragement, the comments that were thrown his way ranged from doom to gloom. Why on earth would he do such a thing? Did he not realize he was going to ruin his young children's lives? Wasn't he scared?

St. Pierre wasn't necessarily taken aback, because he, too, had similar questions. Edwardsville had been his home for eighteen years; there, he, his wife Lisa and their three young children had good lives, a nice home, a successful toy store and by all markers were doing well. However, St. Pierre could not help but feel that he was being called to do something different. He describes the feeling as a crisis of faith wherein he began questioning the Christian tradition he had been brought up in and what it really meant. These questions got even more urgent while on a mission to Kenya with his church. There, he was particularly moved by the story of a seven-year-old girl who had lost both her parents to AIDS and had recently been attacked while manning her uncle's home, and he questioned how the God he believes in could allow such suffering. That's when it hit him: To truly live in the love he wanted to live in, he had to enter into the places where that seemed to be lacking.

When he left for the trip, he thought that place might be Kenya. However, before returning to the States, he realized that he was being called somewhere a little closer to home. He shared his thoughts with his wife, and less than a week after landing home, they were looking at a house off of Goodfellow Boulevard, five blocks north of the Delmar Loop. They closed on it a month later, packed up their belongings, and left Edwardsville to start their new life in the community they wanted to serve.

That service took the form of Restore St. Louis, a ministry that helps people in the community with things like home repair, health care and tutoring. The organization also started a school and put significant effort into trying to combat human trafficking in the area — tremendously important efforts but, as St. Pierre would come to realize after a conversation with a local gang member, efforts that were incomplete. During that talk, the young man in question told St. Pierre that, while he appreciated all that he was doing, what his community really needed was jobs. His words hit St. Pierre hard, and while on a plane back from a speaking engagement, St. Pierre started sketching out a plan for what a jobs-focused ministry would look like. By the time he landed, he had the full plan for Have A Cow Cattle Company, Urban Farm Store and Café.

MABEL SUEN
A selection of items from Have A Cow: Field Greens salad, The Whole Farm burger, sides, cinnamon roll, The Porker sandwich and pancakes.

To call the entire Have A Cow operation ambitious is an understatement. Though they had no farming experience, the St. Pierres bought a 180-acre cattle ranch in Owensville, Missouri, in 2017 and established a herd to begin producing grass-fed beef. Four years later, that beef is sold directly to consumers and at Have A Cow's Urban Farm Store and Cafe, which is located in St. Louis' Gate District. All three prongs of the outfit — the farm, the store and the restaurant — exist with the intention of providing job opportunities for people throughout the St. Louis community.

St. Pierre admits it's a corny thing to say, but he truly believes that his mission with Have A Cow is to love and serve one another. It's a nebulous idea, but one that he and his staff carry out through kind hospitality and delicious food. Though he admits that the food component is second to his overall social mission, he and his team have still taken great care to create tasty American breakfast and lunch fare. This is especially evident in the cafe's burgers, which use the local, grass-fed beef produced at the Have A Cow cattle ranch. The meat is incredibly fresh, simply seasoned and cooked perfectly to temperature. Good on its own propped on a buttery brioche bun as the Half-Pounder, the burger also shines as the more decadent Whole Farm option with a farm egg, bacon and cheese.

Have A Cow's Triple S sandwich is another delicious use of the ranch's beef. This riff on a Philly cheesesteak pairs hunks of the tender meat with grilled peppers, onions and pepperjack cheese, all tucked into a pillow-soft hoagie bun. Another sandwich, the Barnyard Chick, is equally well executed. Dressed (optionally) with avocado, Swiss, bacon and honey mustard, the chicken is plump, juicy and well seasoned. It's straightforward comfort. 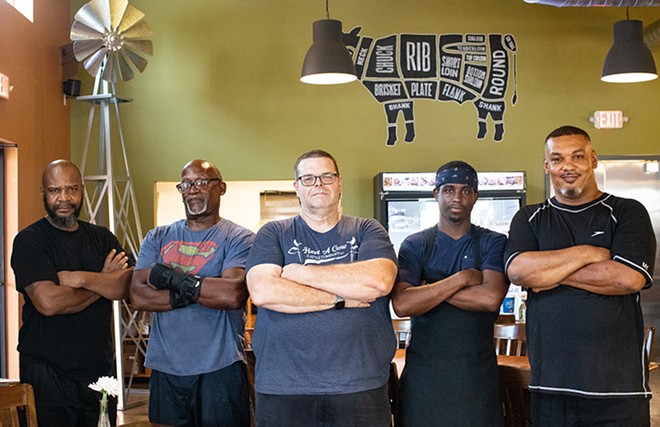 MABEL SUEN
The kitchen crew at Have A Cow.

Though the burgers give it a run for its money, Have A Cow's chili may be the cafe's tastiest dish. This thick concoction, brimming with chunks of beef, beans and rustic-chopped mild green chiles, is a hearty, mouthwatering affair. On a hot summer day, it was still enjoyable; in the heart of winter, it will be a must-have dish.

For breakfast, Have A Cow offers traditional favorites like farm eggs cooked to order, thick-cut bacon, biscuits and gravy, and waffles. Pancakes are a standout; thinner than a traditional hotcake but fluffier than a crepe, the cakes have a wonderfully crispy edge that gives them an almost savory undertone. The quiche, made from a puff pastry shell, is equally delicious. Filled with ricotta, cheddar, bell peppers, onions and spinach, it's a wonderful treat that works well for breakfast or for lunch.

St. Pierre is thrilled with the way the cafe has come together and the response he's received. Already, he feels that he has been able to create a community that draws from a kaleidoscope of backgrounds, even in the midst of a pandemic, which makes such relational activities difficult. He still feels there is significant work to be done, however, and he admits that there are some things that have not yet come to fruition.

If there's one thing that gives him hope that they will one day, it's his son, who was twelve years old when the St. Pierres packed up and moved their lives from Edwardsville to north St. Louis. Instead of the move ruining his life, as so many had warned, he went on to graduate from high school, attend Truman State University, the Missouri University of Science and Technology, and get a job working for Boeing. He recently moved into the same north-city neighborhood where he grew up with his wife and eight-month-old son.

Sometimes, St. Pierre likes to joke with him that he's going to ruin his son's life. To that, he replies, "No, Dad, I'm all in."