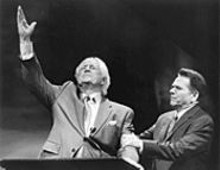 The Repertory Theatre of St. Louis' Studio Theatre seems to have found a formula that ensures success: Find a stimulating play, put wonderful actors in it, have them work with a talented director and place it all in the intimate downstairs theater. The result was great theater last season, and the formula continues to work in the Studio's season opener, David Rambo's God's Man in Texas.

The story chronicles the transition of power in the fictional Rock Baptist Church of Houston, the country's largest and the "Super Bowl of Baptist churches." Dr. Philip Gottschall (William Cain), the founder, is now 81. Part Billy Graham, part Robert Schuller of the Crystal Cathedral, Gottschall has built his church into a dynasty, replete with a college, dinner theater and bowling alley. His weekly televised service is watched by millions. Though he's not ready to step down, his board thinks it's time to find a successor. His choice is Dr. Jeremiah Mears (Robert Elliott), the pastor of a smaller church in San Antonio. But Gottschall almost immediately begins to regret his decision. His technical director, recovering alcoholic Hugo Taney (Bob Burrus), ultimately fuels the confrontation between the two pastors. It's the relationship among these three men, and the different ways that religion informs their lives, that makes for a fascinating, rewarding and surprisingly entertaining evening of theater.

That Rambo tells this large story thoroughly and engagingly with only three characters is a tribute to his playwriting skills. Given the comic history of television preachers, it's a story that could easily be told as condescending farce with outsized Texas characters cartooning it up. But Rambo and director Stephen Rothman approach their subjects with integrity and sincerity, keeping the realistic tone throughout. Rambo starts with the premise that these two men are sincere in their love of God and their desire to help his flock. It's their approach that differs, and that seems to be Rambo's key question: What is it that drives a person to religion? In his multilayered play, the theme of fatherhood comes up often -- God as the father, Gottschall as father figure, Mears' father who left when he was 16, Hugo's discovery that he has 12-year-old he's never seen. In comforting Hugo, Mears confronts the fact that his whole life has been an attempt to win approval from his absent father, a metaphor that extends to his relationship with God and religion in general. But how do we receive this approval? How do we hear the voice of God? Does it come in a whisper, a clap of thunder, a sermon from a TV preacher, a phone call offering a new job?

Weaving these themes together is a simple story, told clearly and with suspense by Rothman, of how the power struggle at the church will play out. We get so enmeshed in the characters' lives that we're always wondering what's going to happen next.

The three actors make what they do seem effortless. It's the kind of acting you don't notice -- nothing flashy, no histrionics, just solid, in-the-moment believability that draws us deeply into the play. Cain and Elliott are totally convincing as preachers; if they ever decided to give up acting, they could both draw large congregations. Elliott, who played an entirely different type of minister in last year's Inherit the Wind, gives Mears a confidence in his beliefs that never seems sanctimonious. He's given the difficult task of acting a crisis of faith and, helped by the script and direction, pulls it off. Burrus, with his variety of nervous mannerisms and noises, is the kind of person we all know, the seemingly jocular guy who turns out to have a secret life and surprising depth. Cain's Gottschall is a white-haired, larger-than-life figure who is certain he has heard God's voice and won his approval; it's reflected in his manner and attitude.

All this is played out on a dynamite set designed by Klara Zieglerova that splits the small stage down the center with a huge golden cross (or is it a sword?). The two resulting playing areas -- the pulpit and the business office -- visually reinforce the conflict of religion versus commerce. Gordon DeVinney's subtle costuming expresses the class differences and personalities of the characters, and Betsy Adams' lighting design overcomes the challenges of that huge cross and smoothly delineates the transitions in time and space.