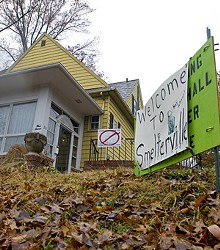 After waging a three-month battle with local officials over plans to build an iron-ore smelter in Crystal City, residents of the Jefferson County municipality hope a flurry of last-minute lawsuits will derail the project.

On Tuesday, November 27, a group calling itself Concerned Citizens of Crystal City filed suit, claiming that Crystal City officials violated state and local laws in approving a contract with developer Wings Iron Ore to build the $1 billion smelter on property owned by Pennsylvania-based PPG Industries. The deal is set to close by mid-December.

In 1990 PPG shuttered the doors to its century-old glass factory that once served as the town's largest employer and provided Crystal City its namesake. The PPG land — a 250-acre tract bordering the Mississippi River and Crystal City's historic downtown — has sat empty ever since, with the Missouri Department of Natural Resources declaring just this past May that the contaminated land is once again suitable for development.

The Concerned Citizens' lawsuit is the third legal challenge made in recent weeks in an attempt to halt the smelter. Earlier this month, Tom Kerr, a developer who plans to build a vast recreational complex on land immediately adjacent to the old glass factory, filed a "prescriptive easement" suit against PPG in a Jefferson County court. Kerr is asking the court to grant him ownership of the strip of PPG's property that borders his land, a part he says he's cared for and maintained in PPG's absence.

Nearby resident Jack Ginnever has filed a similar suit, claiming the PPG fence lies ten feet inside the property line. "I've been maintaining that property since I moved here," says Ginnever, whose large turn-of-the-century home once served as a hospital when Crystal City was a company town. "I feel that property is mine. I also hope my lawsuit will cloud the real-estate title and slow the sale for the smelter."

Ginnever says the city council's haste — and secrecy — in negotiating a contract for the smelter left him with little recourse other than a lawsuit. Since Tom Kerr first discovered and broke the news of the smelter plan this summer, the town's twice-monthly city council meetings have held capacity crowds, largely in opposition to the project. A confidentiality agreement signed between the city council and the smelter's developer, Jim Kennedy, owner of Wings Iron Ore of Sullivan, Missouri, has cast even more suspicion on the deal. Kennedy did not return messages for comment.

"What the Concerned Citizens don't realize is confidentiality agreements are not unusual, especially when you have speculators who might drive up the cost of a project if word leaks out," argues city clerk Debbie Johns, who says in her 32 years of public service no other issue has so divided the community of 4,500 residents.

Johns says the city is aware of the lawsuits and has its lawyers checking to make sure the contract with Wings Iron Ore withstands legal scrutiny. "I think the nature of all these suits is to stop the smelter. When we try to give them the answers in council meetings, all they want to do is shout it down. The screaming, hollering and cursing — it's ridiculous." says Johns. "That said, I don't think the people against it have all the right facts."

In its most recent meeting on November 19, the city council voted to extend negotiations with Wings an additional two weeks. A final decision on the project could come as early as the council's next scheduled meeting on December 10. Johns says the extension had nothing to do with the lawsuits and notes that Crystal City Mayor Tom Schilly and the majority of council members have been in favor of the smelter since the beginning. Schilly could not be reached for comment.

Concerned Citizens allege in its lawsuit that the ordinance allowing for the smelter is illegal because it was not made available to the public seven days prior to a vote. The group also alleges that city zoning ordinances specifically prohibit smelters on the former PPG site.

Under terms of the deal, PPG will sell the city the property for $2.2 million. The city will, in turn, offer Wings a 99-year lease for the property for a similar dollar amount. In city council meetings, the developer has stated the smelter could provide hundreds of jobs. As part of the deal, the city is also expected to earn twenty cents for every ton of pig iron produced on the site.

In addition to violating its own municipal laws, Concerned Citizens say the city council also violated state Sunshine Laws and has sent dozens of freedom-of-information complaints to the attorney general's office.

"The council would call an open meeting and then have an executive session in private. Later that same night — after everyone in attendance had left the building — they'd come back into the chambers and have an open meeting," alleges Jill Thomas, a spokeswoman for Concerned Citizens. "You're only supposed to discuss very specific topics in closed meetings, and we believe they used these sessions to iron out issues that should have been discussed in public."

A fourth legal challenge to the smelter could come as early as December 1, with Tom Kerr threatening to file suit against PPG over environmental hazards he says he's discovered on the property.

Kerr, who has right of way access to his property through the PPG site, says he's located abandoned sewers and fuel lines on the old glass factory that he believes may be responsible for two recent fish kills in nearby Plattin Creek. Kerr claims he's also found more than 123 title problems to the property.

Unlike the other lawsuits filed against the smelter, Kerr says he plans to file his latest suit, not in Jefferson County Circuit Court, but in federal court.

"Since the beginning the city has alleged that I'm an outsider — and the only one behind stopping the smelter," says Kerr. "That of course is untrue, but that's also why I plan to file this lawsuit in federal court. It takes it out of the realm of the good ol' boys."

Jump to comments
« Tony, With a Twist   |   Hopelessly Devoted »