He's Gotta Have It: In Nymphomaniac, von Trier plunges deep 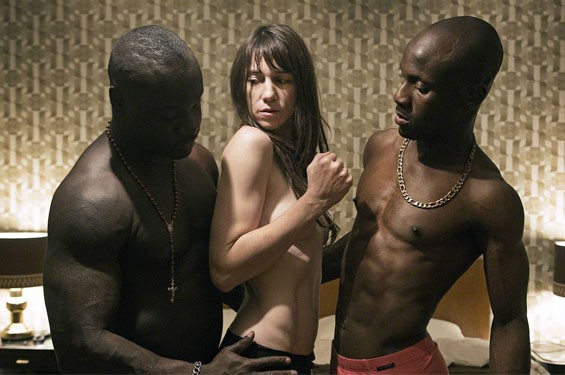 He's Gotta Have It: In Nymphomaniac, von Trier plunges deep

Past traumas, however, are open season. We don't know much about Seligman, Skarsgard's character, except that he's a non-practicing Jew with a head full of trivia. He couldn't relate less to Joe, a woman possessed of the sexual power to seduce anyone, and when he tries, Nymphomaniac becomes something truly shocking: a comedy. Told of the schoolgirl sex club where she and her friends were forbidden to shag anyone twice, Seligman gets sidetracked by their sacred chant. "That's the Devil's interval!" he chirps, digressing into a theory of musical dissonance. Told of her sex competitions in which she and her best friend seduced men on a train, he blurts, "That's a very clear parallel to fishing in a stream."

Nymphomaniac isn't interested in the hows or whats — it cares about the whys, or, from Joe's often bored expressions, the why-the-hell-nots. She doesn't have a good reason for boning seven men a night, besides the cynical line that love is "just lust with jealousy added." But do we need her to have one?

Vol. I's subject is emotional penetration. As a nymph in hot pants, Martin, in flashback, pounces on a happily married man who begs her to leave him alone. She cares nothing about the consequences, and she doesn't have to: She can simply get off the train and move on. Her conquests don't register as individual men with lives beyond their moment of pleasure. Instead they're a blur, each so indistinct that she literally rolls dice to decide how to treat them. In an oddly beautiful sequence, she relates her men to music. One is the stabilizing base, another the driving thrust and a third the fanciful melody. They don't conflict, they complement — a counterpoint to the romanticized modern fantasy that one person can fill all our holes.

It's only when another woman enters her home — a jilted wife and mother of three played uproariously by Uma Thurman — that Joe is forced to recognize that her lovers have lives. Even so, she admits with a shrug, it doesn't affect her own. It must. Maybe. Unless adult Joe's wince-inducing injuries are unrelated to her past, a joke I wouldn't put past that trickster von Trier. But from teaser footage of Vol. II, it looks like Joe's inner numbness funnels into a need for exterior pain: bondage, whipping, the abuse she seems to crave. I'll be sad if this devolves into a film where promiscuity gets punished — and I'm still nervous that there's an "aha!" moment ahead where she turns out to have been molested by her devoted father, Christian Slater. Yet if the off-kilter pleasures of Vol. I is von Trier enticing us to watch the rest, consider me seduced.