By Randall Roberts [email protected]
click to flip through (2) 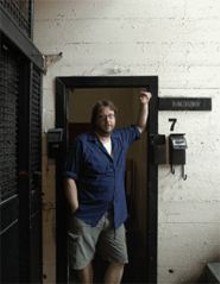 Jenna Bauer and six fellow artists spent the hours before her lease expired last week trying to move a half-ton printing press from her sixth-floor studio/living space in the Leather Trades Building on Locust Street into her new loft apartment on Washington Avenue. Although the press possesses the clumsy bulk of a piano, its ballasts rolled easily into the freight elevator, which descended smoothly to the ground floor.

Maneuvering it down the two steps and into the alley was another story. The process was made a bit more difficult by the artists, each of whom had a different solution to the problem. The machine teetered, the artists brainstormed. After a few false starts and pinched fingers, the press landed on solid ground in the alley. Rather than load the machine onto a truck, the artists simply rolled the thing to Bauer's new digs a block away.

Bauer, carrying the stress of relocating six years' worth of her very productive artistic life, was short on time but happy to be on her way out of the 8-story, 124,000-square-foot edifice that had been her creative refuge and her home. "Rumors were flying, and its days seemed obviously numbered," she says of the decision to leave the Leather Trades Building.

Long a hub of the downtown art scene, the Leather Trades Building has in recent months seen an exodus of the artists who'd once flocked to take advantage of its raw space, cheap rent and sense of community. At its peak, nearly 30 artists had studios in the building. Many also lived there — in violation of city occupancy regulations — a fact to which co-owners George Sams and Giuseppe Pirone, and city officials, seemed to turn a blind eye.

Joe Papendick has watched the downtown renaissance from his perch on the eighth floor of the Leather Trades for twelve years. Through the rumor mill he has heard that the building will be vacant by December. "But no one's told me anything," he complains. "I've heard nothing official."

For most of its hundred years' existence, the Leather Trades Building housed light manufacturing and businesses, from printers to office-supply companies to the leather wholesalers that inspired its name. It was designed by Albert Bartleson Groves, whose most important St. Louis work is the Masonic Temple on Lindell Boulevard, across from St. Louis University. The Leather Trades went south along with the rest of downtown during the 1960s, but in the mid-1980s, artists came sniffing around for cheap studio space.

Jon Cournoyer, senior graphic designer at the Saint Louis Art Museum, discovered the Leather Trades half-empty in 1986, began renting soon thereafter and by 1990 was fully ensconced. "I was the first person to live there illegally," Cournoyer says with evident pride. Other frontiersmen followed.

Sams and Pirone inherited the artists and businesses when they acquired the building in 1995. "We improved that place," says Pirone, who in the early 1980s co-founded Bar Italia in the Central West End. "We made it habitable when we bought it, and we turned it into a place where artists could work, where they could afford to work."

Over the years, many alumni and professors from Washington University and Webster University have leased studios there, says Arny Nadler, an associate professor of art at Wash. U. who still rents space in the building. "Essentially, you sign the lease, they give you the key and say, 'OK, this is your space.' Barring anything extreme, you can do with it what you want."

This has included driving sports cars through the Leather Trades' vast hallways, setting up tent cities in a unit and designing striking, minimalist living spaces. Though the building's municipal permits do not allow for full-time occupants, over the years the ownership has had a tacit don't-ask-don't-tell arrangement with its tenants.

"It was understood from the get-go that people were living here," Papendick says. "It was up to you how much you wanted to do." Tenants drilled through concrete floors to tap into plumbing systems, built kitchens and wired new outlets into walls. During his time there, Papendick says, he has never once interacted with a city inspector. Six days a week a postal carrier enters the Leather Trades and delivers mail on each doorstep.

"Even though nobody knew, everybody knew," adds Cournoyer, citing articles over the years that alluded to artists living in the building. "I don't think the city cared at that time, because it was such a new concept for our city."

Tenants say that because costs for utilities are included in their rent, the city doesn't know when tenants move in or out. "No electric or gas bills," says a current resident who declined to be named in print. "All of that's included in the lease. It never raises a flag, because nobody, say, in the water department, sees that this is billed in someone else's name."

The Leather Trades Building is zoned for industrial use, which allows for residential tenants if the units comply with occupancy requirements. The fact that people lived in the building anyway doesn't surprise Frank Oswald, deputy building commissioner for the city of St. Louis. "A lot of people over the years, historically, have set up apartments [in industrial] areas and we'd have really no way of knowing that," says Oswald, adding with a conspicuous lack of urgency: "They probably shouldn't have been living there."

Late last year Papendick noticed that young professionals were doing a lot of coming and going in the building, carrying clipboards and tape measures. A sculptor and restaurateur (he co-founded Kitchen K on Washington Avenue), Papendick has watched similar behavior precede the transformation of other downtown buildings into high-dollar loft spaces. "They kind of looked at me like, 'Oops, we're sorry we're taking over your space. I know we're totally uncool, dude, but we're just doing our job.'"

Another tenant says the clipboard wielders told him they worked for downtown redeveloper Pyramid Construction.

Pyramid spokeswoman Amanda Cook would not comment for this story other than to say the company has not purchased the building. But phone calls to the company led to the desk of a staffer identified as the "project manager" for the Leather Trades.

Papendick, whose five-year lease expires in September, says he hasn't been able to get any answers out of George Sams or Giuseppe Pirone. "With twelve years of living here, I was hoping someone would consider that I might need a little notice," he says.

Counters Pirone: "We've been upfront with everyone."

But neither Pirone nor Sams would discuss the building's ownership status, despite repeated requests for comment for this story.

"We're in the middle of some legal wrangling at this moment," says Sams, who also alludes to "legal woes" he declines to divulge. "My lawyers say I can't talk."

Documents on file with the city indicate that the Leather Trades Building has an assessed value of $235,400, based on an appraisal of $735,600 in 2005. The owner of the property is listed as Leather LLC, whose address is 1426 Washington Avenue. That address is home to New City Realty, which is owned by downtown developer Sam Glasser. His past projects include Washington Avenue's Knickerbocker Lofts and King Bee Lofts.

Glasser declines to clarify his involvement with Leather LLC or the Leather Trades Building.

The specifics of its murky future aside, the Leather Trades symbolizes downtown's Gilded Age as a low-rent haven for artists — and those days, clearly, are numbered. When she moved into the Leather Trades, Jenna Bauer paid $300 a month for 2,000 square feet; when she moved out, her rent was nearly $700. Bauer's new, smaller loft rents for $600 a month.

"These days condo units downtown are $210 or $220 per square foot" or more, says longtime market watcher and former downtown developer Tim Tucker. Tucker believes the Leather Trades Building would sell for about $3 million. "It's a good building," he adds. "It's been pretty well taken care of, and you might be able reuse some of it — although everybody's gutting everything these days."

"I can't afford downtown anymore," says Arny Nadler, who relocated his studio to an industrial warehouse on the city's north side, near where Union Avenue intersects with Interstate 70. Now he's the only artist in his building, he reports. Then again, adds Nadler, "I know it's not going to go condo."

Jump to comments
« "I can just hope that every single person can experience a live show just once. They will be changed forever."   |   Ballsy »