Higher Calling: Trinity Episcopal and the Fight for Gay Rights 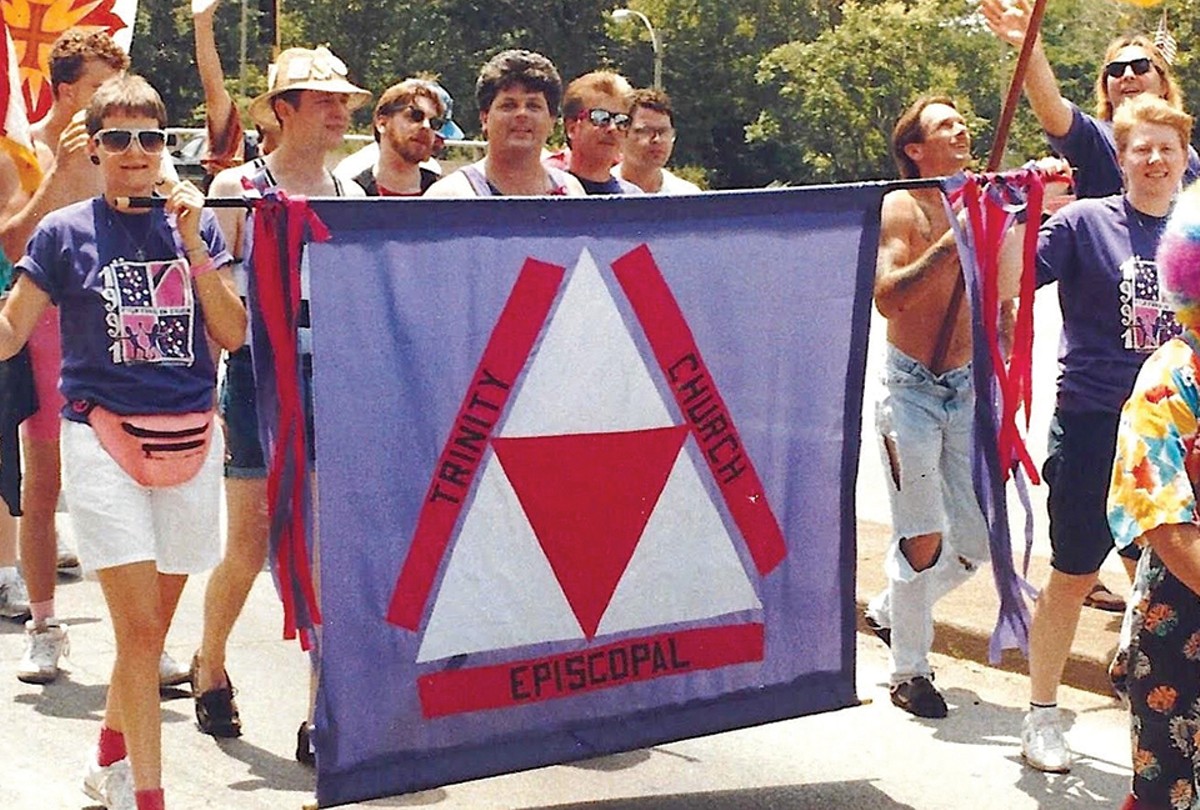 On a hot, loud night in September 2017, a small band of people protesting police abuse retreated from the tension of the past twelve hours and filed through the doors of Trinity Episcopal Church.

An armored vehicle with helmeted St. Louis cops rolled past outside on Washington Boulevard. Dozens of other officers in riot gear were still advancing on foot a few blocks south on Euclid Avenue, occasionally firing rounds of pepper balls that burst as they hit buildings or the random protester, delivering a pop of an irritant that burns the eyes.

The activists in the church were protesting the acquittal of ex-cop Jason Stockley in the killing of Anthony Lamar Smith, and they would return to the street soon, but the parish hall offered a brief, welcome oasis.

For decades, the old gray stone church on the northern edge of the Central West End has not only served its congregation, but has also frequently provided a refuge for revolutionaries, outcasts and political dissidents. Countless organizations, religious and decidedly not, that were not welcome anywhere else have held meetings and programs in the parish hall. Over the years, a succession of progressive priests and lay leadership have made it the church's mission to welcome the stranger and attend to the community beyond Trinity's walls.

That has been especially true when it comes to matters of social justice and civil rights. Nowhere has that been more evident than in Trinity's long-running contribution to the gay rights movement. In June, the diocese's first openly gay bishop will visit the church to celebrate its dedication as the first site in Missouri and one of fewer than twenty in the United States to be added to the National Register of Historic Places based on its importance in LGBTQ history.

It's a history that rarely gets any attention outside of a small number of academics and historians who bother to look beyond New York City or San Francisco, Stonewall or Harvey Milk when telling the story of gay rights in the United States. But St. Louis, and especially Trinity, proves the Midwest played a crucial role, says Dr. Katie Batza, an associate professor of women, gender and sexuality studies at the University of Kansas, who helped write the application for the national register. And telling that story lets people who feel invisible in the country's middle see their hometowns in a different way.

"They don't have to move to New York or San Francisco to be seen," Batza says. "You can just walk down the street." 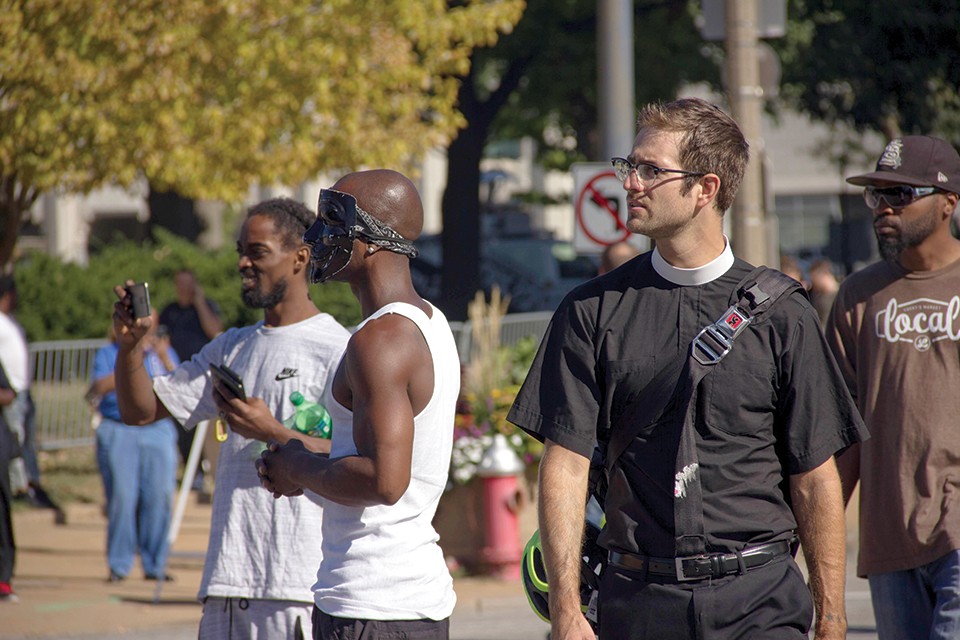 As far back as the 1950s and maybe even earlier, Trinity was following a path of inclusion that would have been unthinkable in other mainstream religions. Church historians describe "house blessings," an understated precursor to same-sex civil unions and, eventually, marriages.

The church, located a block south of Delmar Boulevard on North Euclid Avenue, sat in the midst of a neighborhood in flux. Wealthy white people were selling their homes and fleeing to the suburbs as less-affluent black people moved into the grand old homes, which were being subdivided into apartments.

"Faced with plummeting attendance and uncertain prospects, Trinity's remaining members and the leadership of the local Episcopal diocese considered disbanding the congregation," wrote Ian Darnell, a curatorial assistant at the Missouri History Museum who has extensively studied St. Louis' LGBTQ history and Trinity's role during the period. "They chose, however, not only to keep Trinity in operation, but also to reaffirm its identity as a 'neighborhood parish.'"

That meant reaching out to the newcomers in the Central West End. Within a decade, the church had integrated significantly — a third of the congregation was black. That welcoming attitude soon included gay members as well. Trinity was in what was known as St. Louis' "gay ghetto," a vaguely defined swath of central St. Louis that had become a cultural hub, with gay bars and coffee shops. By the late 1960s, Sunday services were filled with blacks and whites, gay parishioners and straight ones, worshipping shoulder to shoulder.

Longtime parishioner Jym Andris, 81, says that legacy of inclusion impressed him when he and his then-partner joined later. Other churches "sorted people into two piles — you were us, or you were them," but he could see Trinity was different from the first service he attended.

"They were all worshipping side by side," Andris says, choking up at the memory, "and they didn't really seem interested in how different you were."

The inclusion of black and LGBTQ people began growing organically as a result of the neighborhood's shifting demographics, but a wild night in 1969 pushed Trinity further into the gay rights movement. Halloween had become one of the premier party nights for gay men in the Metro area, the costumed tradition lending itself naturally to raucous drag balls in the gay ghetto. That year, there were big celebrations in the city and across the river in East St. Louis.

Shortly after midnight, a group of nine men were leaving a gay bar on Olive Street when police arrested them.

According to the police report, officers were responding to reports of a fight among the group. A detective sergeant claimed they were arguing over boyfriends and shoving one another when he and four officers from the department's vice division arrived.

"At this time the Officers through their own observations thought that several of the subjects were possibly males dressed as females," the sergeant wrote in his report.

Until the 1980s, St. Louis had a law against "masquerading" — wearing clothing of the opposite sex in public. The law was written in the 1800s for reasons that slipped away over time, but police had begun wielding it in the arrests of gay men. That the nine were stopped at the end of Halloween night when untold thousands of costumed people — presumably a number of them in clothes that tweaked gender norms — had been partying throughout the city didn't seem to count as a defense. Technically, Halloween was over; it was 12:25 a.m.

Police hauled them all to the jail, fingerprinted them and booked them into cells. As proof of the men's criminal behavior, the sergeant catalogued their outfits:

Most of the nine refused to speak to police after they were taken into custody. But at least one answered a few questions. According to the report, a detective asked him about that night and whether he and the others were gay, even though the masquerading ordinance said nothing about sexual preference.

"I have been going to the places in that block of Olive," the 24-year-old reportedly said, "because on Halloween we get to dress like women, which I love to dress like, and that in this part of the city all the fellows are gay and we can have fun without the police bothering us."