Hiro's Welcome: The Loop's newest sushi joint has something extra to offer 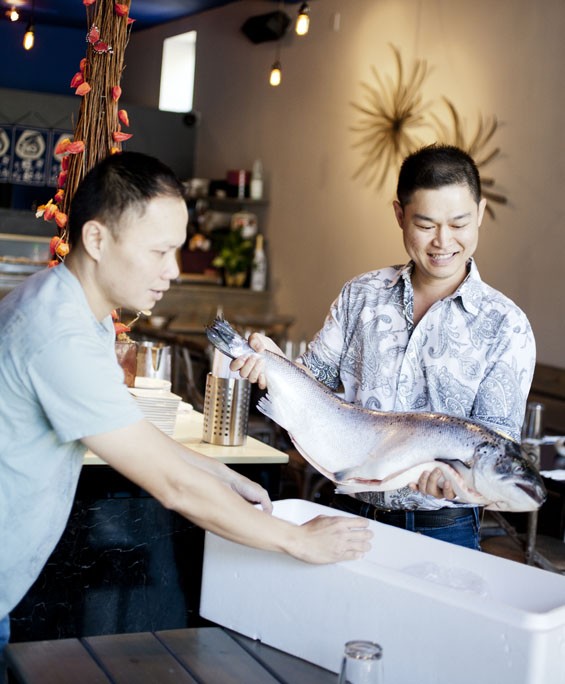 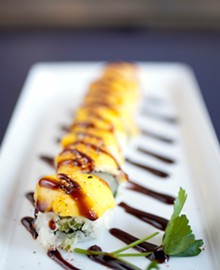 Hiro's Welcome: The Loop's newest sushi joint has something extra to offer

Sometimes, at a sushi restaurant, reading over the menu of "special" rolls, my eyes will glaze over, and I will slip into a reverie in which I imagine wrapping whatever is close at hand — chopsticks, my cell phone, my wife's purse, a small child — in nori, topping it with salmon, avocado, maybe a pinch of that teensy orange flying-fish roe and a drizzle of eel sauce, and then serving it to another table. Would they notice anything was amiss? These days I might not.

At Hiro, this moment struck after I read about the "Crunchy Pig" roll (pork belly, bacon and shredded pork) but before I made it to the "Buffalo" roll (grilled chicken and "wasabi ranch" sauce). It was probably right around the time I encountered the "Cabana Boy" (tempura-fried oyster with cucumber and wasabi ranch).

Hiro opened in late July in the Delmar Loop, the final act in a sudden musical-chairs realignment of the University City sushi scene. Hiro's address was previously the home of Blue Ocean Sushi. This past spring Blue Ocean took over Loop sushi mainstay Seki. After briefly operating both restaurants simultaneously, Blue Ocean closed its original location on Eastgate Avenue and turned Seki into Blue Ocean. The original Blue Ocean space didn't sit empty for long. Bernie Lee, who owns 609 Lounge & Restaurant in the same building, announced in June that Hiro was on its way, and the restaurant was open within a month.

Hiro has composed an expansive menu that offers both sushi and izakaya; the latter category loosely refers to Japanese bar snacks — or, if you must (and the restaurant does, on a chalkboard just inside its front door), tapas. The temptation to order sushi will be strong. A Pavlovian response, perhaps: Hiro looks like the prototypical sushi joint: a narrow space dimly lighted and decorated in a clean, modern style. The dining room features banquettes along two walls, with a few tables in between and the sushi bar at the back.

Hiro's sushi might sate your craving, but it's nothing to write home about. There's the standard array of nigiri and sashimi. The fish in the nigiri I ordered was precisely sliced and impeccably fresh, but the rice bore signs of refrigeration, its temperature cool, its texture clumpy.

Besides the requisite selections (Philadelphia, California, spicy tuna and so forth), the menu touts the aforementioned "special" rolls and also a separate category of "signature" maki. From the former group, I succumbed to curiosity and ordered the "Crunchy Pig." (Because, you know, pork.) This is pork belly and bacon wrapped in nori and rice, then topped with shredded pork skin and a plum barbecue sauce. The meat is cold, a conscious choice on the part of the chef, but one that greatly diminishes its fatty charm. The result is akin to taking a bite out of a ham sandwich.

The "Golden Child" is more interesting: "white tuna" (a marketing euphemism for escolar, which, when consumed in excess — not a problem with this roll — can cause digestive trouble), avocado and bits of "crunch" (fried tempura batter) rolled inside nori and rice and then topped with sliced mango and the "eel" barbecue sauce normally reserved for unagi. The contrast in texture provided by the pairing of sweet, supple mango and slightly fatty fish is striking, and inspired.

The Scoville scale crowd will appreciate "Geisha Tears": Spicy tuna and salmon and pickled jalapeños make up the filling; on top are slivers of fried ginger, a jalapeño mayo and sriracha-like "Hiro sauce." Hot, but not torturously so. The "Cosmopolitan," one of the so-called signature rolls, was disappointingly pedestrian: tempura-fried shrimp inside, unagi, avocado and eel sauce on top.

The izakaya menu doesn't hype itself with ridiculous names, but it's far more intriguing than the sushi. Yes, you read the menu correctly: That's a five-piece order of smoked-salmon rangoon, not crab, lurking quietly among the fifteen dishes listed as starters. This one-ingredient tweak isn't a momentous reinvention of the St. Louis favorite, but the subtle substitution provides a distinct fish flavor that imbues these deep-fried won tons with far more character than their crabby brethren.

Fried calamari are excellent: tender in texture, with a light tempura batter that's crisp but not a bit greasy. For extra bite, the squid pieces are tossed with bits of fried onion and slices of raw jalapeño. But pass on the smoked-chicken dumplings. These lack flavor, smoked chicken or otherwise, unless you dip them in the accompanying citrus ponzu sauce.

The standout among the izakaya starters is the braised pork-belly bun: slices of tender, luscious pork tucked along with pickled vegetables inside a plump, soft, chewy, sweet bun. For that matter, I could eat a half-dozen of just the buns, with no filling.

Listed separately from the starters but in keeping with the izakaya spirit are the yakitori selections. You can order a skewer à la carte (prices range from $1.50 to $4 per) or sample one of each variety (chicken wing, chicken with pineapple, salmon teriyaki, black pepper steak, beef with asparagus and pork belly) for $15. If you can choose only one, the pork belly is the way to go. The meat is braised for hours before it's grilled, so it is meltingly tender. Shichimi togarashi (sometimes called Japanese seven-spice) seasoning gives the meat an added depth of flavor and a little chile-pepper punch.

Hiro even gives you an alternative to commonplace miso soup — a lighter, cleaner broth that's chock-full of chopped mushrooms (button, shiitake and enoki). Of course, you can choose to order traditional miso soup. But if you find yourself staring at your soup spoon, wondering what it might taste like wrapped with tempura "crunch" in nori and topped with sriracha, don't say I didn't warn you.