Home for Diner: Belly up to the Kitchen Sink for a burger or something a little more Louisiana-fied

Slideshow: Photos from Inside The Kitchen Sink 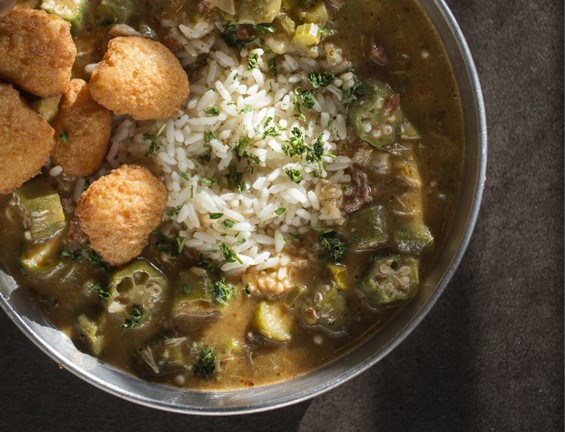 Seafood gumbo. Slideshow: Photos from Inside The Kitchen Sink 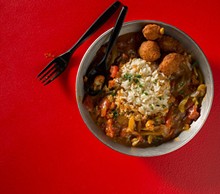 Home for Diner: Belly up to the Kitchen Sink for a burger or something a little more Louisiana-fied

Slideshow: Photos from Inside The Kitchen Sink.

Cars zoom along DeBaliviere Avenue. Slowing slightly, if at all, they turn onto Forest Park Parkway, even when pedestrians have the right of way. Commuters hoof it from the nearby apartment buildings to the bus and MetroLink stops. At the end of the day, they trudge back home. So much traffic here, so few places to eat: a convenience store; a Subway; the former Talayna's, now St. Louis Italian Restaurant & Pizza Co.

When the Kitchen Sink opened along DeBaliviere this past September, it did so with the advantage of its mere existence: a casual, affordable breakfast, lunch and dinner restaurant located next door to the MetroLink station. For those who don't frequent the area, or who pass through only on our way somewhere else, its debut was less auspicious. It occupies a small storefront with opaque windows. Its most striking feature is the restaurant's logo — a kitchen sink, encircled in red — painted on the side of the building it shares with several other tenants.

The interior is a single, shotgun space: dining area in front, open kitchen at the rear. Counter seating stretches along the front window and one wall. There are five booths, which seat two dozen max, depending on how cozy you want to get. Gray is the primary color. Framed black-and-white photographs decorate the walls. A few splashes of red (chairs, a painted stretch of ductwork) offer the only contrast. This is a no-frills diner, a neighborhood joint.

Or so you might dismiss the Kitchen Sink at a glance.

Yet owner and chef Anthony Ellerson Jr. has invested not only money and time in the space but his personality, too. The location is no accident: The 35-year-old Ellerson grew up around here. Rather than the fresh-from-the-foodservice-truck grub you'd probably expect, Ellerson and crew make almost everything from scratch, and the menu features appealingly quirky takes on classic fare, with a definite Louisiana accent. (Ellerson's résumé includes a formative stint at the late Soulard Cajun restaurant Norton's).

The burgers here are plump half-pound patties, grilled to order. A basic, unadorned version, called the "Reggie," is juicy and flavorful even when cooked beyond the requested temperature (medium). Variations include the "Tejas," which mixes bacon and bits of roasted jalapeño into the ground beef for an even more luscious body and mild heat. A topping of fried jalapeños offers more pungent piquancy, while fresh cilantro and avocado and a queso fresco sauce provide a cooling antidote.

Sandwiches feature generous portions: a link of andouille sausage hidden somewhere beneath a pile of sautéed shrimp (the "Bayou Billy"); a club sandwich of smoked turkey, applewood-smoked bacon and tasso ham; an appropriately overwhelming muffuletta (available in a half-portion if you don't feel up to the whole mogilla). Even such a straightforward production as the jerk-chicken sandwich impresses with its smartly seasoned chicken breast — spicy, but not overwhelmingly so, topped with crisp bacon and a thick ring of grilled pineapple. You know the fruit is there, yet you're surprised when, on your first bite, its nearly molten juice seems to detonate.

Perhaps nothing speaks to the Kitchen Sink's ambition more than the fact that the kitchen hand-cuts the French fries. The result is excellent — almost. On my visits the fries were thick and beautifully browned but tended to be a touch more oily than crisp. Still, these are good fries. An order of onion rings brings fat slices lightly battered, their flavor more onion than deep-fried — a welcome change. My favorite side is the corn fritters, which look uncannily like Chicken McNuggets but are actually gobs of corn kernels, battered and deep-fried. A bottle of Sriracha sits on each table, and I found the pairing of the fritters with the chile sauce a terrific pairing of hot and sweet.

Hidden at the end of the Kitchen Sink's menu (both the printed version and the one handwritten on a chalkboard near the ordering counter) are the chicken wings: traditionally deep-fried, grilled with a jerk seasoning or deep-fried with Thai spices. The traditional wings are lightly battered for an additional crunch. The house sauce adds a lightly sweet and tangy accent to the meat.

Ellerson's Cajun influences dominate the brief selection of entrées. Jambalaya with andouille, tasso ham and chicken manages to balance the flavors of the meat with the aggressive profile of blackening seasoning and the holy trinity of bell pepper, onion and celery. The kitchen throws a few of those corn fritters atop the jambalaya because, dammit, why not.

The restaurant's namesake dish (the "Kitchen Sink") is a version of shrimp and cheddar-cheese grits topped with a gravy of tasso ham and crab meat. The gravy is rich and remarkably flavorful, more porky than crabby, and a good match for briny-sweet shrimp and cheddar-sharp grits alike. If anything the gravy is too much for the grits — or there's too much gravy relative to grits. Compounding the issue: When I ordered the "Kitchen Sink," the grits were a bit runny.

Ellerson himself recognized this flaw while I was still eating the dish and, by way of apology, brought me a piece of turtle cake (chocolate, with walnuts) on the house. It's the kind of gesture you remember. On an otherwise barren block, the Kitchen Sink, seemingly just another stop on the MetroLink line, is the sort of restaurant that might — that should — stop you in your tracks.

Ellerson and crew make almost everything from scratch, and the menu features appealingly quirky takes on classic fare, with a definite Louisiana accent.