Honey, I Shrunk the Opera 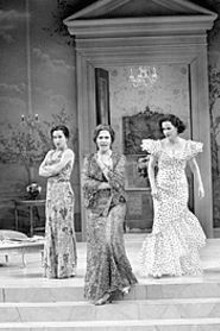 Who needs the Three Tenors -- give me three sopranos any day. Let's face it: The plots of most operas are a melodramatic joke. And the roles for men are about as convincing as J. Lo saying, "Till death do us part." Which means the primary excuse for even bothering to stage the average opera is to set some soprano up to show off her pipes. Sari Gruber, Christine Brandes and Phyllis Pancella are the three sopranos. Opera Theatre of Saint Louis' current production of Domenico Cimarosa's comic opera The Secret Marriage is the excuse. Stage director Colin Graham sets up the pins and the three robust and unfettered songbirds bowl a perfect game.

Back in the eighteenth century, Cimarosa wrote 65 operas, nearly none of which is ever performed anymore. There's a good reason. The Secret Marriage is considered by most experts to be his best work, and it's pretty thin stuff. It's to opera buffa (comic opera) what I Love Lucy was to situation comedy: hack work based on standard characters. Like I Love Lucy -- and most TV sitcoms -- the characters in The Secret Marriage are based on stock commedia dell'arte characters that date back to the Middle Ages. Like I Love Lucy, the success of a production like this is totally dependent upon great performances overcoming the ordinariness of the script. Just as Desi Arnaz did with Lucille Ball in I Love Lucy, Graham carefully tailors The Secret Marriage into a vehicle for his talented female leads.

Graham has, mercifully and gracefully, slashed Cimarosa's overwrought four-hour work to a sleek and seamlessly funny two hours and forty-five minutes; intermission included. Here's how it works: Pay attention during the recitative, the sections of the opera that are recited over Jennifer Peterson comping on the harpsichord; that's when plot is being advanced. Then, when the orchestra starts playing, you can sit back and revel in some great singing. There are only six characters in the show, and they get to sing in every possible combination. Cimarosa wrote attention-deficit disorder tunes, short bursts of scampering melody followed by endless sets of minor variations and major repetitions. Graham and conductor Jane Glover have done a masterful job chopping out much of the repetition but retaining just enough vocal runs and singers' flourishes, lots of pretty harmonies and plenty of room for throaty pyrotechnics.

The comic acting is excellent. In addition to the women, Jeffrey Picón as Paolino, Carleton Chambers as Lord Robinson and especially Evan Rainy Bennett, a last-minute fill-in as Geronimo (Elisetta and Carolina's father), bring zesty life to the characters. All six come up with fresh and energetic portrayals of stock characters. They have lots of fun with the comedic acting as they gleefully mug and pratfall their way through the production. All the performances are lively and infectious. But it's the girls' singing that dominates the evening. They run the table at every opportunity.

The Secret Marriage was first performed in Vienna in 1792 for the recently crowned Emperor Leopold II, who had imported Cimarosa from Italy and commissioned him to write and stage it. As the story goes, so taken with the initial performance of the opera was Leopold that he invited the cast, crew and musicians back to his palace, where he fed them dinner and then had them perform the whole four-hour show again.

Old Leopold's opera company must have had a gaggle of fine sopranos, too.