Or: How Tony Hawk turned skateboarding into a multimillion-dollar international obsession

By Robert Wilonsky [email protected]
click to flip through (2) 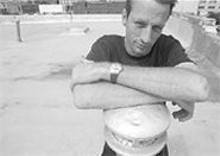 I have never read The Odyssey, A Tale of Two Cities, Pride and Prejudice, or, for that matter, the Bible. But I have read, from cover to cover, Occupation: Skateboarder, the just-published autobiography from Tony Hawk. I have never seen most of the films of Yasujiro Ozu, Robert Bresson, or Carl-Theodor Dreyer, but I have seen Gleaming the Cube and Thrashin', two movies in which Tony Hawk has small roles -- as, of course, a skateboarder. I do not watch Crossfire or Meet the Press or the evening news, but last night I did catch an episode, and there are several, of Tony Hawk's Skatepark Tour on ESPN2 -- all 60 minutes of it, from first stunt to final fall.

And, once or twice in my life, I have even been Tony Hawk, or at least a reasonable, digital facsimile. All it takes is a PlayStation or an N64, a television, a copy of Tony Hawk's Pro Skater, and the lack of anything better to do than play a video game in which your object is to "skate" till you can no longer feel your fingertips. In real life, I can barely walk; as Tony Hawk, I am the master of the Stalefish 540 and the Gay Twist 360 Varial. And, still, I do not even know what those things are.

The 31-year-old Southern Californian long ago stopped being a name and became a name brand; in 1983, when he was just a gangly, scabbed-over child, he pocketed 85 cents for each Tony Hawk pro-model board sold. Then there were the stickers, the shirts, the posters -- even then, when he was an icon only among the fanatics and fetishists. Today, he's both corporation and cultural hero, subject matter for both Sports Illustrated and The New Yorker. When he walked into the newspaper office to conduct an interview, twentysomething men vibrated in his presence, making up excuses just to bump into him in the hallway so they could tell him they owned his first board or saw one of his old skateboard fetishist movies. It's as though Daniela Pestova, Anna Kournikova, and Brad Pitt merged into one person; Hawk is supermodel, super athlete, and superstar -- the heterosexual male's man-crush.

"My fame is a little...odd," Hawk says, taking a brief respite between a morning appearance at a local skatepark and an afternoon book-signing in a mall. Two days earlier, he was in New York, being interviewed by The New York Times and MTV, getting prepped by The Late Show with David Letterman producers for an August 30 appearance, and signing his name for the adoring teenagers. Today he's in Dallas; tomorrow...well, he has no idea.

"Actors generally set out to be famous, and then once they get there, they're like, "Oh, yeah, of course -- I can totally treat people like shit now,'" he says, barely smiling. "But when you're an athlete, your drive is just to better yourself and not necessarily be famous. I am sure a lot of people are gunning to become professional athletes, but at the same time, it's more about doing what you love to do and getting paid for it. I never expected this. It's amazing, but it's crazy. I'm thankful for all of the success. Generally, whenever I meet people and they recognize me, it's always positive. It's not like I'm some controversial figure or I play for the wrong team or whatever. That's always nice. It's not, "You suck!'"

Hawk is the first superstar of Generation X Games, owing his fame to an alliance with ESPN, which rescued skateboarding as it lay in a coma during the summer of 1994, and MTV, where Hawk turns up now and then as Tom Green's skateboard-terrorist pal. He has become famous and, finally, rich riding waves of concrete like a surfer at high tide. He's the very definition of man-child.

In 1994, Hawk started his own skateboard-manufacturing company with $40,000, money made when he refinanced his house; now, Birdhouse is worth millions, selling boards and wheels and accessories to boys and men all over the world. They, like Hawk and his comrades in broken arms, speak in their own dialect, one rife with references to "ollies" and "reverts" and "fakies" -- all skateboarding stunts, aerial ballet performed without benefit of net or cushion. Tony Hawk is their idol, their poster boy, a god in kneepads and helmet. Then, how could a man named Tony Hawk not become a star hanging in the rare air? His is a name better suited to a superhero -- the Silver Skateboarder.

Not so long ago, Hawk was just another skateboarder who rode fame's tiny wave as long as it lasted and crashed, ass-first, into financial ruin. He has been around skateboarding long enough to have been a teenage star and an early-20s failure. He went pro in the early 1980s, then went broke in the early 1990s, after he had spent so much of his life's savings on a $30,000 Lexus LS400 and discovered how thin was the line separating fad from fade. By 1991, skateboarding was about as fashionable as the Flock of Seagulls haircut Hawk wore eight years earlier. At one point, wife Cindy put him on a Taco Bell allowance: five bucks a day, no more. Not long after that, Tony and Cindy were divorced.

Were it not for skateboarding, it's likely Tony Hawk might have ended up a juvenile delinquent, one of those safety-pinned punks who wash up on the Southern California shores during high tide. He was, he likes to say, the pre-school dropout, causing grief for his mother and father, who had Tony around the time their three other children were nearly grown and out of the house. In Occupation: Skateboarder, Hawk refers to himself as "an accident," and he spent the earliest part of his childhood punishing his parents for their, well, mistake: He was the crybaby, the spaz, the scab collector, the tiny kid with the enormous IQ who fought for the attention of parents who never expected his arrival. He was, simply, a pain in the ass.

When Tony was 6, his 18-year-old brother Steve gave him his first board: a beat-to-hell banana board. By the time he entered fourth grade, Tony was skating around local parks; he fell in love with the bumps and bruises, the thrill of the board. By 1980, he was a member of the so-called Bones Brigade. He had his first sponsor (a team co-founded by Stacy Peralta, "the Arnold Palmer of skateboarding," as Hawk writes in his book), his first teammates, and his first taste of the big time. Two years later, Hawk turned pro -- and he was one of but 35 pro skaters in the world, a number that has since multiplied a hundredfold. By 1985, Hawk recognized that the thing that saved him from a troubled childhood had become, quietly and quickly, his entire life.

"I think I discovered that skating was going to become my career around my junior year of high school, when I started making really good money and realizing that I already had a career," he says. "Teachers were trying to guide me this way and that way, and I was already making a better living than they were, so when I graduated I was ready to dive in even more as far as traveling and touring and competing."

His father even got into the business, starting the National Skateboard Association in 1983. For a while, things were rough when Frank Hawk crashed his son's private utopia; Tony's friends thought of his pop as a dictator. But long before Frank's death in 1995, father and son made their peace, and Frank Hawk's NSA became one of the key ingredients to skateboarding's popularity during the 1980s. The other was his son.

Tony Hawk is now retired from the sport, meaning he no longer competes on the circuit; he stopped last year, not long after he managed the nearly impossible feat of completing the infamous 900 -- two and a half rotations in mid-air. He now spends his time with his second wife and their child, and he's on what seems like the never-ending skatepark tour, demonstrating his skills for the thousands of teens who line the pipes to watch their poster come to life. Others came before Tony Hawk, and they made skateboarding legit. They made it a life. But Tony Hawk made it a lifestyle.

"Yeah, but I think it's always been a lifestyle, and I think that's something that has been obvious throughout skating's rise in popularity," he says, and his modesty is sincere. "When we were growing up, that was our community. It was everything we knew: skating and the music that surrounded it and the look. It all evolved, but it's still a complete package of everything, and when people finally took notice of it, they liked all aspects of it. It may be more diluted now -- it's safer -- but it hasn't lost anything. It's still the thing I love."

Yes, Tony Hawk is the quintessential 21st-century celebrity: He's 31, skateboards for a living, and got HarperCollins to publish his self-penned life story. Albert Einstein never even wrote an autobiography. But he never performed a Backside Shove-It Frontside Nosegrind either.

Jump to comments
« Booknonsense   |   No Dancing »