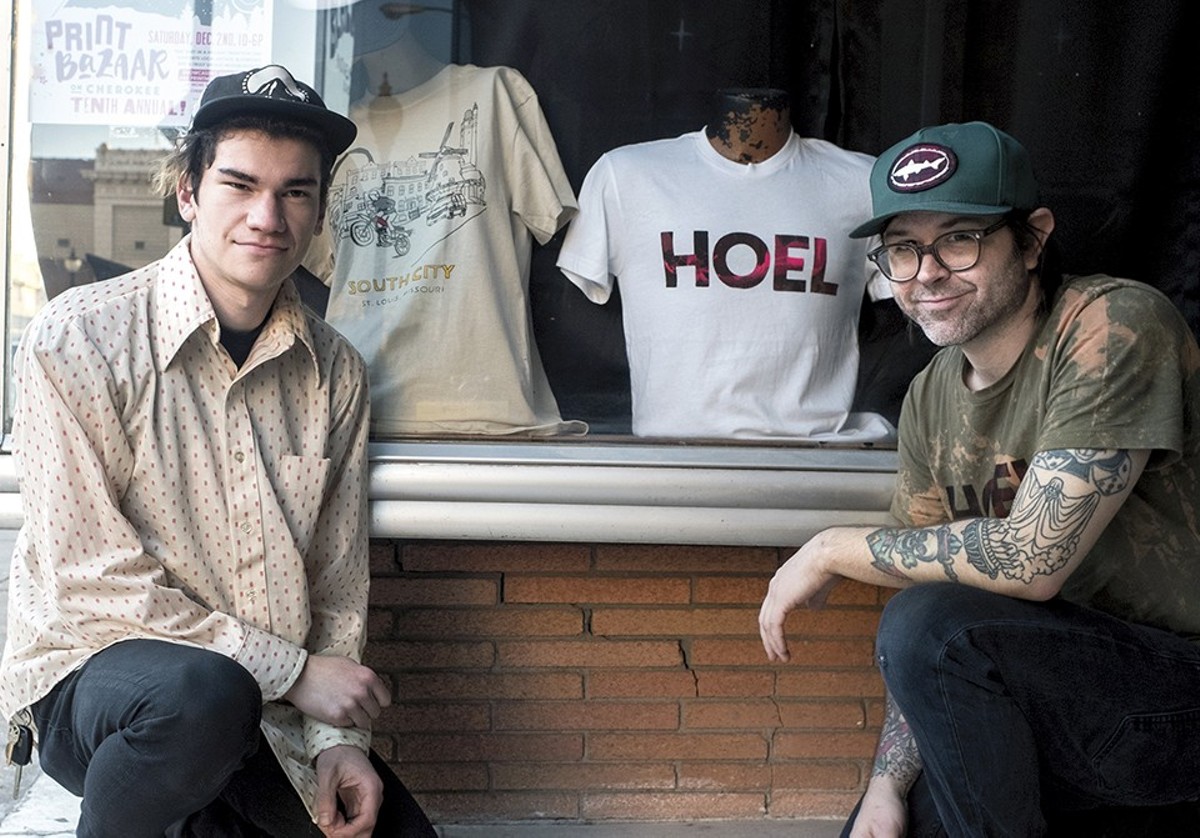 Nathan Prater (right, with Austin Roberts) outside the House of Eight Legs storefront on Cherokee Street.

Walk into any copy center in the nation, be it FedEx Office or the UPS store or whatever quaint mom-and-pop operation you frequent, and there are a few things you can count on seeing. A college student seeking to bind a thesis paper. A suit tying up the fax machine. Somebody's aunt who wants a low-resolution photo of her cat blown up poster-sized.

But if that copy center is a 24-hour operation, something more interesting happens when the sun goes down: In come the weirdos.

Maniacs and drifters cobbling together ransom notes with the free scissors and glue on hand. Grifters forging copies of coupons to be passed off as the real deal at local businesses. And, especially around the turn of the century, when Nathan Prater was an employee at a Kinko's in St. Peters, bands and musicians copying and pasting fliers and fanzines and album art.

"When you were a kid, Kinko's was like — it was where sort of cool people worked," Prater explains. "It was where you printed your zines, it was just like: Kinko's was a big deal. So I always wanted a job there."

A musician himself, Prater especially loved when bands came in. He enjoyed being surrounded by creative people. Sometimes he was even able to hook them up with deals.

"Employees were empowered to do whatever," he explains. "If it's a band that's in there, maybe I just didn't charge for the cutting or whatever.

"And it's sort of been a thing all along — even with doing this," he adds. "I feel like I owe something, I don't know. The idea of supporting kids in bands, even though I feel like I'm totally out of touch — it's still something that I know is so important in my life."

The "this" to which Prater refers is his screenprinting operation, House of Eight Legs, nestled in an unassuming storefront in the heart of Cherokee Street, next to Spoked. Over the years Prater has certainly shown plenty of support to the local music community he so reveres. He estimates he's worked with as many as 70 percent of the bands around town since he got his start, becoming the go-to guy for T-shirts and similar band merch, especially for punk and metal bands. Remarkably, nearly all of that business has come through word of mouth; as Prater's professionalism and skill became known in the industry, House of Eight Legs became one of St. Louis' worst-kept secrets.

But Prater intends to no longer take a passive approach to marketing his work. At 40, he celebrated a milestone in November when he quit his day job in order to focus his time fully on the business. Not that he hadn't already put in a lot of time: House of Eights Legs has been his baby for more than a decade now.

"I've been screenprinting forever, since like 2006 or something, like kind of as a job," Prater explains. "And I've always done basement stuff and that kind of thing." But two years ago, he got a job doing pre-press work for a corporate printing company; he moved his screenprinting runs to evenings.

The situation left him feeling stretched too thin.

"I just couldn't imagine sitting there five years from now," he acknowledges. "I also sort of realized that all these people that went to school for this — I've always had a hangup about that because i'm totally self-taught — I realized that, like, I can do this. And I can do this better than most of those people too."

Though Prater says his years at Kinko's fueled his passion for printing, he experimented with the art form prior to that. As a member of both the punk band the Paxidils and seminal screamo group Love Lost but Not Forgotten, Prater got his start making shirts for his own bands. Around 2006 he moved into a tiny space in the back of Firebrand Recording's studio and began making shirts for other local bands in earnest. A friend since childhood of Firebrand co-owner Brian Scheffer, Prater relished working in an environment where he was surrounded by creative people.

"That was one time when I actually worked around friends. And nothing feels better," he says. "Actually nothing is worse for me than being locked in a place alone, because it feels great, but it's also depressing."

In the years that followed, Prater moved into a few different homes with basements; House of Eight Legs came with him. "I always find these nooks and crannies to print in, because I'm not a businessman, so my business model is just to make more money than I spend," he explains.

But when his corporate day job afforded him a decent financial cushion, Prater took the leap and started renting the Cherokee Street space. His shop opened its doors for the first time last December for the Cherokee Street Print Bazaar. Since then Prater has assembled a staggering amount of talent under its auspices, working with artists including Theresa Moher, Seaby Bess, Austin Roberts and Jerome Gaynor.

Gaynor, who some may remember as the luminary behind the old STLPunk.com website, actually rents a small portion of the space to use as an office for his freelance work, as does Ben Smith, a member of numerous local punk bands, including the much-lauded Lumpy & the Dumpers. Their contributions help Prater make rent. Smith, a web developer, explains that he has a work-from-home job and simply wanted a desk, and describes his role at the shop as "occasionally the guy who lets in the FedEx man."

Roberts, who is also the vocalist of local hardcore band Q, came into the fold almost by accident. One summer night the shop was hosting a small Game of Thrones watch party. Roberts was just hanging out on Cherokee Street when he saw Smith, whom he knows from punk shows, walk inside.

"I was like, 'Where is Ben going? Where is he going, what is this place?'" Roberts explains. "And then I go in and watch Game of Thrones. And then Jerome is there, and I'm like, 'Oh hey, Jerome.' And then like I'm like, 'Whoa, there's fucking screenprinting shit back here?' Because I'd been doing it at my house. Like sneaking in to burn screens at my school."

When Prater put out an open call for help with a project in September, Roberts was the first to respond. Since then he has become a constant presence at the shop, pitching in wherever he can in exchange for access to Prater's high-end equipment and wealth of knowledge.

"I don't believe in internships," Prater explains. "I want him here because I think I can help him make a couple of bucks and do art. He makes awesome T-shirt designs, we print them, he sells them and I dig it.

"His adoption is pending," Prater jokes. "I'm gonna be his legal father soon."

To hear Prater tell it, he is down to work with anybody who shows a passion for screenprinting. The collection of artists he's assembled all pitch in in different ways, some financially, some creatively. Prater's roster of clients, which he has built up over more than a decade in business, keeps the lights on. "It all started with bands, but every band has five people in it, and those people all have an uncle who has a barbecue trailer or something," he explains.

So Prater now, again, finds himself in a work environment where he is surrounded by creative people — exactly where he wants to be. His plans for the future are vague at best, but with as much talent as he has assembled so far, the sky is the limit.

And of course, more creative types are welcome.

"I like doing what I do, but I don't feel like I have the art chops that some of these guys do," he says. "I'm all about like — the door is open for anybody who wants to come here and just do it."