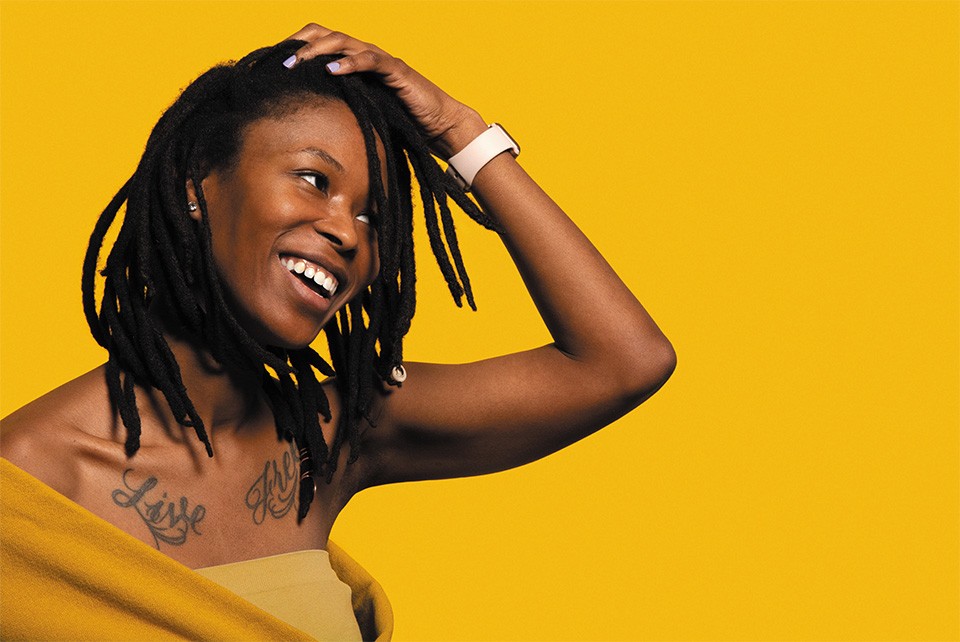 The author, above, found the courage to say no to "neat."

"Girl, why is your hair all over your head?"

I stood there for a moment, my mother's words sharp like a bee sting. I knew she meant no harm, but I had felt so proud of how I looked. I answered, "Mom, these are free-form locs." Earlier that day, I had found and allowed my spirit to shine in its truest form. But the journey to self-love is never an easy one.

Two hours prior to my mother's rather unwelcome, yet not entirely unexpected, response, I was sitting in a downtown St. Louis hair salon endearingly named Napps. Monique, the beautiful being whose chair I occupied, wore a colorful crop top with a piece of Kente cloth adorning her waist. Her grounding in her own spirit called me to crawl out from behind the world's standards and join hers.

We talked about spirituality, incense, alkaline and ancestors. Then she paused to ask how I wanted my hair done. I hesitated for a moment, the truth on my lips as if waiting on the pop of a starter's pistol to let it go. But her energy brought it out of me.

"I'm considering free form, but I don't know ..." The words lingered in the embarrassment I felt in not giving myself the love to be free.

Free-form locs are the father of traditional dreadlocks. Most people with locs go in and get their hair styled and roots re-twisted for a more "clean and neat" look. Free form is more organic. It's about letting your hair take the shape for which it was intended: no manipulation. It's allowing your spirit to manifest on the outside in its truest form.

Monique inquired as to why I wouldn't take the leap, rinsing what felt like every inhibition from my hair. Then she laid on my spirit the words that have stuck with me ever since: "If you can't be who you are in your own skin, then what you're doing isn't for you."

It was refreshing to find someone so grounded, but also saddened me that I'd been living in St. Louis my whole life and never received such bracing words. I was scared of how "untamed" my hair would look to others — the residual effects of the grooming I had received for decades.

Hair was a topic we seldom spoke about directly in my family, but it always tended to come up in conversation, verbal or not. Growing up, I was one of five and the only girl. I can still hear my mom telling me how she'd prayed for a full head of hair for me. She hadn't dealt with natural hair herself, because she had only had boys prior to me. And she herself had a low cut like them.

My whole life my mom has always been confident with her hair; I mean the woman literally said, "I'm done with my hair," and cut it at a time where women with short hair were looked at as masculine. Her routine was very simple: She would take the boys to get their hair cut, and have the barber cut her hair as well.

As a child, I would go with them to the barber shop. Her living in her truth was huge to me before I even knew it. I remember thinking "How cool is she?" as she sat among the men, there for the same thing. She could assert herself, cut out the nonsense and remain as delicate as a lotus. She was free and confident in her own skin as a black woman.

I've never seen my mother with hair, like ever. She first cut her hair in her late teens, in 1977. Keep in mind the era she was in. In the 1970s, natural hair exploded in the black community as a whole, and St. Louis was no exception. Afros adorned the heads of many, and black power ignited the black community like the Olympic torch. Black hair was being shown in a positive light. My mom was the image of that in her own way.

It was her own form of liberation. Growing up, my grandmother would keep Mom's hair pressed. Every couple of weeks, my mother would hesitantly walk into the loud bustle of the beauty salon: chairs filled with women talking about what they'd done that week, what was the new style, about "Jack" and his slick perm. Despite all of that, her eyes were dead-set on her seat amongst it all. She didn't want to battle against the familiar enemy of many black women: the hot comb.

Many black women can attest to their love-hate relationship with the hot comb. It was what you endured to be "beautiful," and my mother wasn't immune. She sat still as the comb heated up, staring in anticipation as her beautician pulled it from the stove, the smoke that wafted from it validating her fears. As the comb got closer, the fear of getting burned washed over her, forcing her into the darkness behind her eyelids. It wasn't pleasant. But society, family and that voice inside insisted your hair should look neat, neat was straight and straight hair meant an appointment with a hot comb.

But even after she resisted the hot comb, even as she got her hair cut so very short, my mother still signed on to the opinion that your hair should look neat. She wasn't alone in that. Even in the era of the afro, there was always this underlying distaste for styles that looked "unkempt." You can see it if you look back on pictures of how afros were styled. They were trimmed to the "T" and picked to perfection, not a hair out of place. This sort of unspoken rule of neatness often acted, and still acts, as a catalyst in the avoidance of hairstyles that show the true natural form of black hair. And this influenced my personal hair journey.