In Once Were Brothers, Robbie Robertson Fondly Recalls the Band 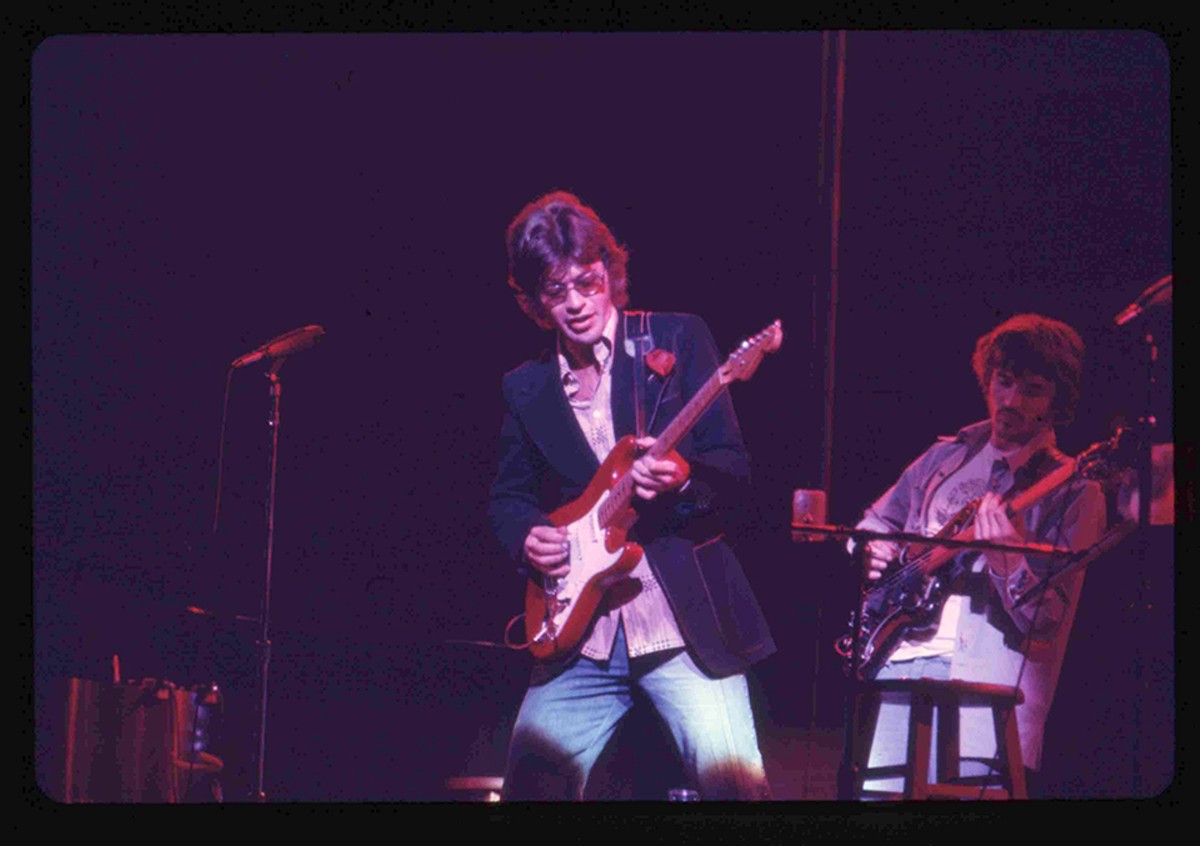 Robbie Robertson in his younger days.

Once Were Brothers: Robbie Robertson and The Band

Rock music — especially in its first few decades — has always carried a heavy collection of mythology, so much that the history of the music might be better told by a modern Homer or Joseph Campbell than a Jann Wenner. The legends were inseparable from the records. There were heroes and heroines, romances and tragedies, and legends: How King Elvis aroused the TV multitude (even though they could only see his face); Lord Jagger outwits the Censors at the Court of Ed Sullivan; Sir Jimi tames the Guitar of Flames; The Fab Four outwit the Elder at the Temple of Transcendental Meditation.

If rock & roll may finally have reached its declining years — a death that critics have been predicting ever since the genre rode in on the wheels of Jackie Brenston's "Rocket 88" — it may have less to do with the shifts of taste or culture than with the cold reality of time. Every single person who played at Woodstock and is still around to tell about it is (with the exception of two young members of ShaNaNa) older than 70 now.

Once Were Brothers: Robbie Robertson and The Band is the latest of several recent documentaries that function as rock & roll hagiographies, but the tale it tells almost lives up to the un-ironic heroic-isms of its title. Based on Robbie Robertson's autobiography Testimony, one of the best of the current flurry of memoirs from the rock hierarchy, Once Were Brothers recounts one of rock music's most erratic not-quite-success stories. It's the history of a group of musicians who created a musical tradition entirely their own and rose to the top but managed to snatch defeat from the jaws of victory at every turn.

Raised in Canada by a First Nations mother (Cayuga and Mohawk), his biological father was a Jewish gangster. (Robertson's book contains anecdotes of this side of his family worthy of a rock & roll Goodfellas.) He was still a teenager when he joined up with Ronnie Hawkins, a rockabilly performer known more for non-stop touring and frenetic live performances than for hit records. (Hawkins, now 85, is one the film's interviewees, free of any resentment toward his young protégés.) Through Hawkins, he met Levon Helm, a multi-talented wild man from Arkansas; over a short period, the other members of what would eventually become The Band fell into place and they were ready to strike out on their own.

Their lucky break — the first great stage of the myth — came when Bob Dylan hired them as his backup band. (In the film, he describes them as "gallant knights.") Dylan had decided that he liked the noise and energy of rock & roll; his fans didn't. Once Were Brothers offers generous footage from Dylan's 1965-1966 concerts, facing audiences who Robertson recalls were almost uniformly hostile. He and his partners were making exceptional music that was completely out of sync with current taste. It wouldn't be the last time.

In 1966 Dylan moved to Woodstock, New York, to recover from a motorcycle accident, immediately bestowing the small town (which was not, incidentally, the site of the '69 festival) with a reputation as rock music's Camelot. Dylan's manager Albert Grossman dreamed of making the town an artistic outpost, opening a restaurant, building a recording studio and encouraging musicians to take up residence. Robertson and company found a house known as "Big Pink" where they hung out with Dylan, recorded several hours of demos (the famous "Basement Tapes") and eventually produced their own album, adopting the simple descriptive name "The Band." (Robertson explains that that's what everyone called them anyway, so why not make it legitimate?)

The Band's first album, Music from Big Pink, was an instant classic, the originator of the musical genre now known as Americana, but with what would become characteristic bad luck, they were unable to truly embrace success. Alcohol, drugs and near-fatal auto accidents kept them from touring to promote the album. A second album, simply titled The Band, matched the first in musical innovation. Albums and tours followed, but the bond that connected them was eroding. The myth had become a tragedy.

Any history of The Band must inevitably pay tribute to The Last Waltz, their 1976 farewell concert which Martin Scorsese turned into arguably — no, make that inarguably — the greatest concert film ever made. Sharing the stage with a string of guest performers — Dylan, Van Morrison, Neil Young, Muddy Waters — who represented both the music that influenced them and the stages of their history, Robertson saw the concert as both the climax of The Band's brief and ill-fated run and the opening of a new door, an eventual reunion that would allow them to work together in the studio without facing the pressures of the road. It didn't work that way.

Director Daniel Roher follows the rock documentary rules — film clips, historical markers and talking-head interviewers (Clapton, Springsteen, Scorsese) — but Once Were Brothers isn't just another dip into the pool of early '70s nostalgia. (For one thing, The Band were so isolated and insular that they don't even seem to be a part of their era.)

Robertson, whose stories are the foundation of the film (Garth Hudson, the only other surviving member, was reportedly interviewed for the film but doesn't appear), adds a note of resigned melancholy, a sense that he's let his affection for his fellow musicians outweigh his disappointment. One gets the sense of The Band as spectral figures, castaways oblivious to the outside world. They created their own world, an alternate history with an unearthly sound drawn from rural backwaters and out-of-the-way juke joints. They were unique figures, proud outsiders in a culture that treats music as just another item for sale. Fifty years later, the music remains ethereal, their talent unavoidable. They were never meant to fit in. How could we have failed to see that?