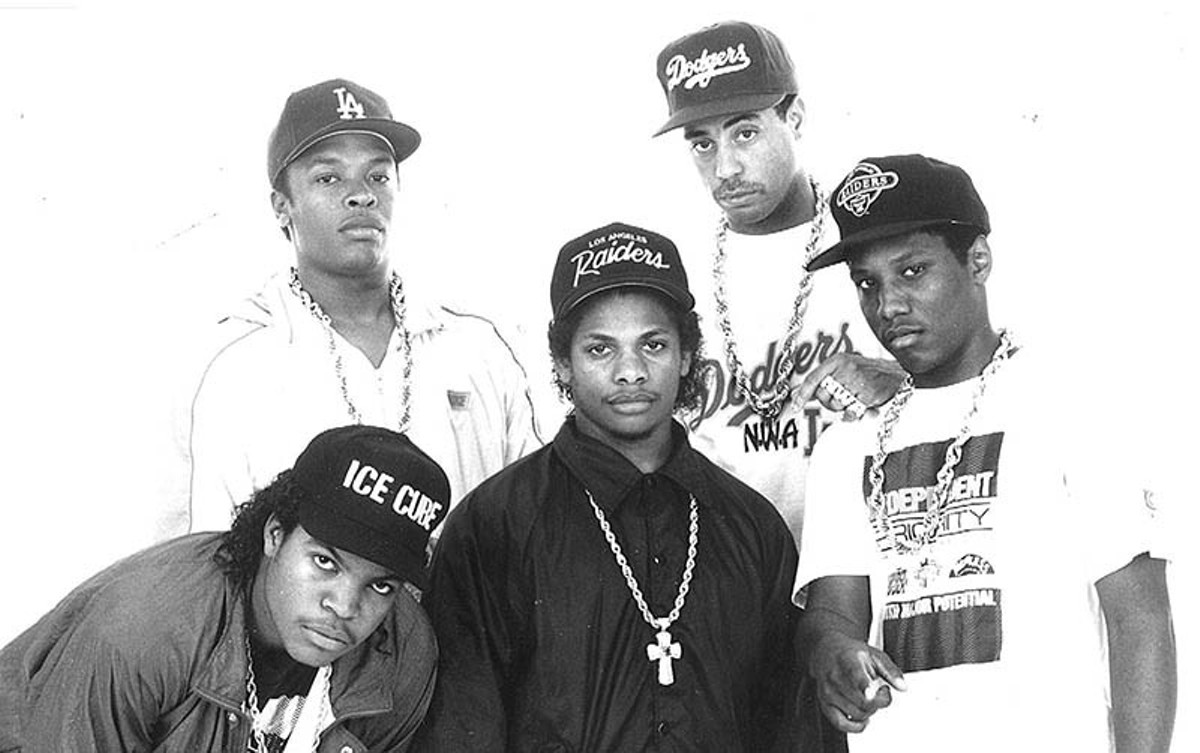 N.W.A in its heyday. PRESS PHOTO

On the afternoon of Friday, September 13, 1996, in the intensive care unit of the University Medical Center of Southern Nevada, larger-than-life rapper Tupac Shakur finally succumbed to the injuries he'd sustained in a shooting six days earlier at the intersection of Las Vegas' Flamingo Road and Koval Lane. Shakur had been shot four times, taking two bullets to the chest, one to his arm and one to his thigh. After a week of surgeries, life-support machines and an induced coma, he flatlined after massive internal bleeding.

Doctors worked to revive him, but the hemorrhaging was too great. His mother, Afeni Shakur, made the decision that they should cease their efforts. Tupac officially died at 4:03 p.m. Pacific time. Respiratory failure and cardiopulmonary arrest in connection with multiple gunshot wounds were listed as the official causes of death. His murderer was never brought to justice.

Two decades later, Tupac's memory lives on. He is one of the most well-known characters in the hip-hop world, with a legacy of music that continues to capture the attention of rap fans worldwide. It's only fitting, then, that on the twentieth anniversary of his death, a captivating new book delving deep into his story — and the bigger story of the rise and fall of west coast gangsta rap — was released.

Original Gangstas: The Untold Story of Dr. Dre, Eazy-E, Ice Cube, Tupac Shakur, and the Birth of West Coast Rap, author Ben Westhoff's sophomore book, dropped this week. The book delves deeply into the history of hip-hop on the West Coast, meticulously unearthing layer after layer of the true story not covered in other books or movies such as last summer's blockbuster N.W.A biopic Straight Outta Compton. Unlike the sensationalized film, there is no true good or bad guy, but a group of young men (and a few women) who struggled to navigate the oft-treacherous path of creating the genre of gangsta rap.

Original Gangstas is a heavily researched tale that follows the path gangsta rap took throughout the late '80s and '90s — a genre intent on highlighting the realities of street life that eventually turned fatal. For old and young hip-hop fans alike it's an in-depth look into the origins of a massive movement that still influences the rappers of today.

The book has St. Louis ties. Westhoff, a former Riverfront Times staffer and current contributor, attended school at Washington University and, after working in LA for more than three years, recently moved back to our city.

Considering that interest, it should come as no surprise that Westhoff found a way to be on set during some of the filming of Straight Outta Compton.

"I respect that project a lot," Westhoff says. "I think it was able to shine a light on this era. There's definitely flaws, but it was exciting to tell the whole story with this book."

Original Gangstas is more of that untold story, revealing the deeply complex personalities of every character portrayed in Straight Outta Compton — and then some. One of the most high-profile subjects is the late Jerry Heller, N.W.A's manager, largely portrayed as a villain in the movie. Westhoff takes great pains in the book to dissect Heller's actions, leaving the reader with a more balanced idea of the famed manager by the end. (Heller passed away this month, on September 2, at the age of 75. At the time of his death he had a lawsuit pending against the creators of the movie, objecting to the way he was depicted.)

Another high-profile subject is rapper Snoop Dogg. His character in Straight Outta Compton is limited to about five minutes total screen time. But in Original Gangstas his entire story is uncovered, revealing much more about the weed-smoking jokester we see on the Internet today. Westhoff's research reinforces the fact that Snoop is a highly intelligent man who was instrumental in salvaging the hip-hop community in a time of major violence and upheaval.

"With the East Coast/West Coast beef, the rhetoric started to ratchet up, and by the end of it two of the most famous rappers in history were dead," says Westhoff, referring to Tupac and New York rapper Biggie Smalls, who was killed roughly six months after Shakur. "Things got a lot more intense and a lot less fun over the decade of '86 to '96."

This is where Snoop shines — in history and in the book. In fact, the best details about him are saved for the end.

"The coolest stuff about Snoop comes in the epilogue," Westhoff says. "[It discusses] all the peace treaties he worked on and how he tried to save hip-hop from self-destruction after the murders of Biggie and Tupac."

While other publications and movies portray Dr. Dre, Ice Cube and Eazy-E as simple, one-dimensional characters, Westhoff is able to shed light on every aspect of these individuals. The book highlights something that many forget when looking back on this era: These self-proclaimed "gangstas" were just kids when all of this started. Many of them were teens still living with their parents. Faced with explosive fame and fortune, they did what many stars still do to this day: They made mistakes.

The book also highlights just how huge an impact N.W.A had on the hip-hop community nationwide. Storytelling is a big theme, with many interviewees referring to the rappers as storytellers, and even at times comparing them to journalists.

Westhoff agrees. "I think that was Eazy-E's plan when he founded Ruthless Records," he says. "[Compton] was the kind of place that wasn't getting much coverage from the mainstream media, so in a way it was up to people like N.W.A to bring a lot of hard truths about life there to the mainstream."

N.W.A and the other rappers did start a nationwide conversation. Original Gangstas highlights this with a hard look at the L.A. Riots following the acquittal of the officers who beat Rodney King. This fraught time in L.A.'s history is still largely relevant today in light of the concerns of the Black Lives Matter movement, making the book all the more compelling.

Original Gangstas is an informative page-turner that sheds an unbiased light on the founding figures who created the gangsta rap genre. It's a raw but heavy look at the hardships that these rappers sought to highlight, leaving nearly no stone unturned in its research of the volatile era. Even after twenty years it brings fresh information to the table, showing there is still more to learn from these influential artists.

As for Westhoff, the decade between '86 and '96 will always be the most notable in his eyes.

"It's such an explosive era," he says. "It's the most exciting era in hip-hop history."