With a talented rotating cast of characters behind him, the local hero has never sounded more rejuvenated. 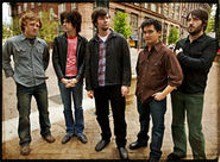 If you belong to the category of pop idealists and rock & roll romantics who believe that the tightly knit, collective sum of the band will not only endure but prevail, think again: A rock & roll band isn't what it used to be, if it ever was.

Just ask Jason Isbell (freshly departed from the Drive-By Truckers) or Kevin Richardson (the Backstreet Boys just won't be the same). Or ask Jay Farrar. Three years ago he was waiting to record the first Son Volt record in over five years, but the band never showed. He made that record anyway, with a new bassist (Andrew Duplantis), drummer (Dave Bryson) and guitarist (Brad Rice). The album, Okemah and the Melody of Riot, sounded like Son Volt, flashing sharp guitar rock across a changing American landscape, looking back to look forward, focused and angry and alive.

But was Son Volt a band in any meaningful sense of the term? They hadn't played a single gig together, they didn't live in the same city, and they probably weren't MySpace friends. When it came time to take the new Son Volt on the road, lead guitarist Rice had other commitments; he was replaced by James Walbourne, then Chris Frame, then Walbourne again.

Rice returned for Son Volt v.2.0's second album, The Search (which was just released by Transmit Sound/Legacy), as did the road-tightened rhythm section of Duplantis and Bryson, and keyboardist Derry deBorja. (The latter two were in the Washington, D.C., band Canyon, which was Farrar's backup band on his 2004 solo album Stone, Steel & Bright Lights.) The band recorded The Search mostly live, having heard only Farrar's acoustic demos, and let each track develop as the group dynamics willed.

Somewhat counterintuitively, The Search sounds as much like a band's vision as that of a single, strong artist — at least by the time the prelude drone of "Slow Hearse" dissolves into the drum fill and horn blast of "The Picture," one of the catchiest songs Farrar has ever written and one inspired by the Rolling Stones' horn section of Bobby Keys and Jim Price. The Search has an open, flexible sound, with deBorja's full-spectrum keyboards illuminating melodies and threading together tunes, and the whole band leaning as one into the Nuggets-style garage rock of "Automatic Society" and "Satellite." "This pain in your heart, full of false starts," Farrar sings on the latter. "Through a satellite we'll find a way." Rice's guitar — which trembles, reverses, phase-shifts and provokes the band from one song to the next — orbits the tune with slide riffs that radiate just like that satellite.

But with the album finished and a two-month Son Volt tour set, Rice has moved on, taking a lucrative gig with country megastar Keith Urban. The band says they wish him well.

"I was a little surprised, but everyone has to do what's best for them," deBorja says. Adds Duplantis: "It's definitely not good timing, but there are no hard feelings. He deserves everything that comes to him. When I'm in Austin, I play in six or seven bands, along with my solo stuff. That's what a band is — it's the sum of its parts."

"I guess it gives me pause," Farrar says, "but I realize that change is essentially good. It gives the band a chance to evolve."

A few moments later, as the topic shifts back to The Search, an album that's as fiercely engaged with American culture and politics as its predecessor, Farrar says he's still hoping to get beyond our current malaise. He'd like to write about more important things, like love or cars. He lets slip a rare one-liner: "Or maybe I could join Keith Urban's band."

More likely, Son Volt will ride out the volatile weather, if not harness it completely. The album begins with a warning of total system collapse: hurricanes, earthquakes, a mass of bloodshot eyes, all the twisted and dissolving truths of life during wartime. "We'll know when we get there, if we'll find mercy," Farrar sings.

The mercy evoked on The Search isn't peace or reprieve or escape: It's in the band's own forward movement through Farrar's visions of the pure and impure products of America gone berserk. He may lead the band, but he's also willing to let the band lead him through whatever sounds they find together.

"Very rarely does Jay say, 'No, no, this is the vision of the song, I'd like it to be like this,'" says Bryson. "Or when we tour, he won't say, 'We need to get back to the way it was on the record.' I like that things can change."

Says deBorja of touring with Farrar: "When [Canyon] learned the solo songs, he was amazingly open with how we interpreted them. He recognized that we were our own band, with our own sound, and he let that influence the songs. That has kind of held up, recording the new album. He's a very flexible and open band leader. He doesn't tell you how to play the parts. He trusts you as a musician."

"I had no idea what Jay was going to do before going in to the studio," Duplantis says, "and I prefer it that way. Jay is very organic; he allows us to play what feels natural. He allows things to happen the way they will. When it happens the way it's supposed to, then it is perfect."

Farrar agrees. "I think it's more of an intuitive process when we get together. The fact that everyone has been in a lot of different band situations, just having that experience to draw from makes the process more fluid."

You could call it a Zen approach to the contemporary facts of rock & roll — the cover of The Search features a Buddha in a cage of video cameras — or just a way to make the best of necessity. Either way, Son Volt has come to reflect the contingency we all face. A person, a band, a country can search forever — and nobody can say what you'll find, or who or what you'll become along the way.

Farrar has taken his departed guitarist's advice and signed up Chris Masterson (of wannabe-country-star Jack Ingram's band) to play lead, and for the two-month tour, Son Volt will pick up horn sections where and when they can. "Maybe we'll call 1-800-Horns Across America," Farrar quips. He's been touring for close to twenty years, and the longest he's been away from the road is three, maybe four, months. He's in a rock & roll band, after all, as much as it's in him.

"It's more of a lifestyle, a calling," he says. "I do find that when I spend time away from it, a pressure builds up, and when I either get back on the road or into a period of writing a lot, it has a cathartic effect. It's pretty necessary for me at this point to keep doing it."