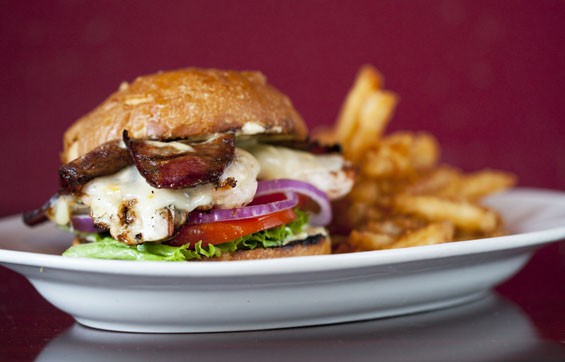 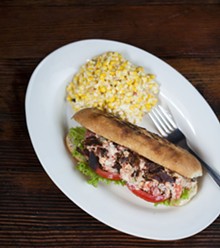 For lunch at Sassy JAC's amid the Inferno of '12, I ordered what might be the last dish any sane person would want to eat during a heat wave: fried chicken topped with gravy. I told myself I didn't have a choice. Sassy JAC's offers its fried chicken only on Wednesday, and this particular afternoon was my last chance to try it before writing this review. If that meant curling up under my office desk all afternoon in a stupor — well, let's just say it wouldn't be the first time.

I needn't have worried. The chicken was a single boneless breast, lightly battered and deep-fried to a gnarled, golden-brown crisp. The gravy ladled over it wasn't the gluey, white country variety (à la chicken-fried steak) but a sauce the color of autumn wheat. The gravy starts with roasted chicken and aromatics and is then simmered overnight; to this is added a classic roux of butter and flour with thyme, salt, both black and white pepper and, at the end, just a touch of heavy cream. It deepens the flavor of the meat without weighing it down. You could never call fried chicken with gravy "restrained," but even with sides of white rice (which conveniently soaked up excess gravy) and braised collard greens, this was no coma-inducing repast. It was the work of a chef who knows how to make a damn fine gravy and when to dial it back.

This juxtaposition between down-home cooking and cloth-napkin sophistication is at the heart of two-month-old Sassy JAC's ethos. The restaurant looks and feels like the quintessential Soulard tavern, all dark wood and vivid red walls, a pressed-tin ceiling above the bar, speakers pumping classic rock, cheerful bartenders slinging ice-cold Buds. Yet chef Andrew Ladlie, who owns Sassy JAC's with his wife, Jennifer, brings a serious pedigree to the party: His résumé includes time as the sous chef at west-county institution Annie Gunn's; most recently he helped launch Frontenac Grill for the late Mike "Talayna" Faille.

JAC's menu is Southern in a broad sense. Andrew worked for a spell in New Orleans; Jennifer's family hails from Savannah. The starters include raw Gulf oysters at $2 a slurp, and a stack of dill-pickle wedges battered and deep-fried, served with barbecue sauce and ranch dressing for dipping. An order of crawfish fritters was the one dud I encountered here. The fritters had been left in the fryer half a minute too long, and they were short on crawfish, both the meat and the flavor.

The garlic fries aren't strictly Southern, but they are a standout — medium-thick and crunchy and tossed with enough diced garlic to vanquish the entire cast of True Blood. You'll love them, even if your significant other won't kiss you for a week afterward. You can order them as a starter or (for a buck extra) as a side to one of Sassy JAC's sandwiches. These include a terrific "club" made with a grilled chicken breast, mildly spicy andouille and nutty Fontina cheese for a subtly classy touch. There is also a "Monte Cristo," the classic Southern deep-fried combo of ham, cheese and jam. (I misspoke earlier: This is the last thing any sane person or even I would order in this heat wave. I'll be back for it later.)

The "Hot Sausage" sandwich brings thick slices of peppery housemade sausage tossed with a tangy barbecue sauce and creamy coleslaw. You can order a grouper sandwich grilled, fried or blackened. I chose the last option, but not without some hesitation. (Too often blackened equals burnt.) But here, a generous coating of blackening spices added quite a kick to a gorgeous slab of fish without carbonizing it. Sandwiches come with your choice of side: fries; coleslaw; collard greens; housemade chips; or thick, sweet creamed corn.

There's no selection of entrées, per se. Instead, Wednesday through Saturday one of four daily specials is available, each priced at $10. The Saturday special is two four-ounce pork chops dredged in flour and pan-fried. Without my having to ask, the chops were served a juicy, flavorful medium. Here, though, the sides stole the show: impossibly thick cheddar-cheese grits and a mixture of stewed tomatoes and okra that could serve as a sauce for the pork or be enjoyed by itself. As noted, Wednesday's special is fried chicken; the other two, neither of which I tried, are meat loaf (Thursday) and fish tacos made with tuna seared rare (Friday).

The two entrées I did order were so refined — the pork chops, plated atop the grits with the tomato-okra stew spooned over them, looked like something a bistro would charge twice as much for (and overcook) — that my gut reaction is to want Andrew Ladlie to offer a wider selection of main courses to showcase his range. But there's good reason to admire his restraint. Sassy JAC's is a lean operation. Ladlie often works the stoves in the tiny kitchen all by himself. He does so with remarkable aplomb. One day I was seated shortly after a party of fourteen: The big group got its meal virtually all at once — and my lunch followed only minutes later.

Not that I minded waiting. In this heat you take comfort wherever you can find it. A cool, dimly lighted bar. And, yes, a plate of fried chicken and gravy. 

Jump to comments
« Food Truck Fever, Part 3: Gyro worship with a side(car) of bánh mì   |   Want Guys With That? Hamburger Mary's strolls into St. Louis with LGBT flair — and food to match. »