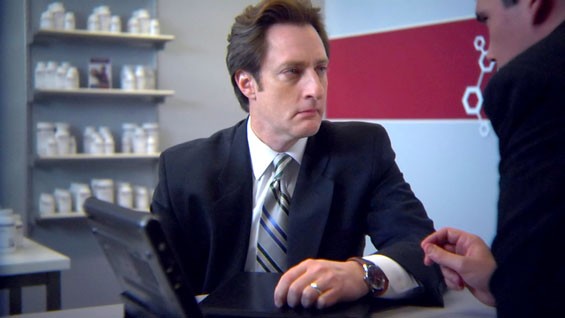 Despairing that cancer took his wife before she could fulfill her dream of having a child, Jim (Dan Illian), an unemployed project manager, turns to a biotech firm that promises to use her frozen eggs to "build" a child with "enhanced" attributes of the sort that will lead it to worldly success. Meanwhile, in the distant future, a human clone (Abigail Savage) designed for maintenance work is struggling to understand the memories it's having of a despondent twentieth-century man and his beautiful wife (Vanessa Morris-Burke), even as it attempts to elude a mysterious power figure (Michael Strelow) with a special interest in those memories. For his impressively ambitious debut feature, writer-director Jeremy Morris-Burke, a St. Louis native, has designed a storytelling structure in which Jim's present-day search for a job is intercut with flashbacks of his marriage, which in turn lead to flash-forwards to a time when Earth has been largely abandoned after a human-clone war. That's a lot of plot for a first-timer with a small budget, and though one senses that the movie in Morris-Burke's head makes more sense than the movie onscreen, his technical virtuosity and thematic ambition mark him as a filmmaker of promise.