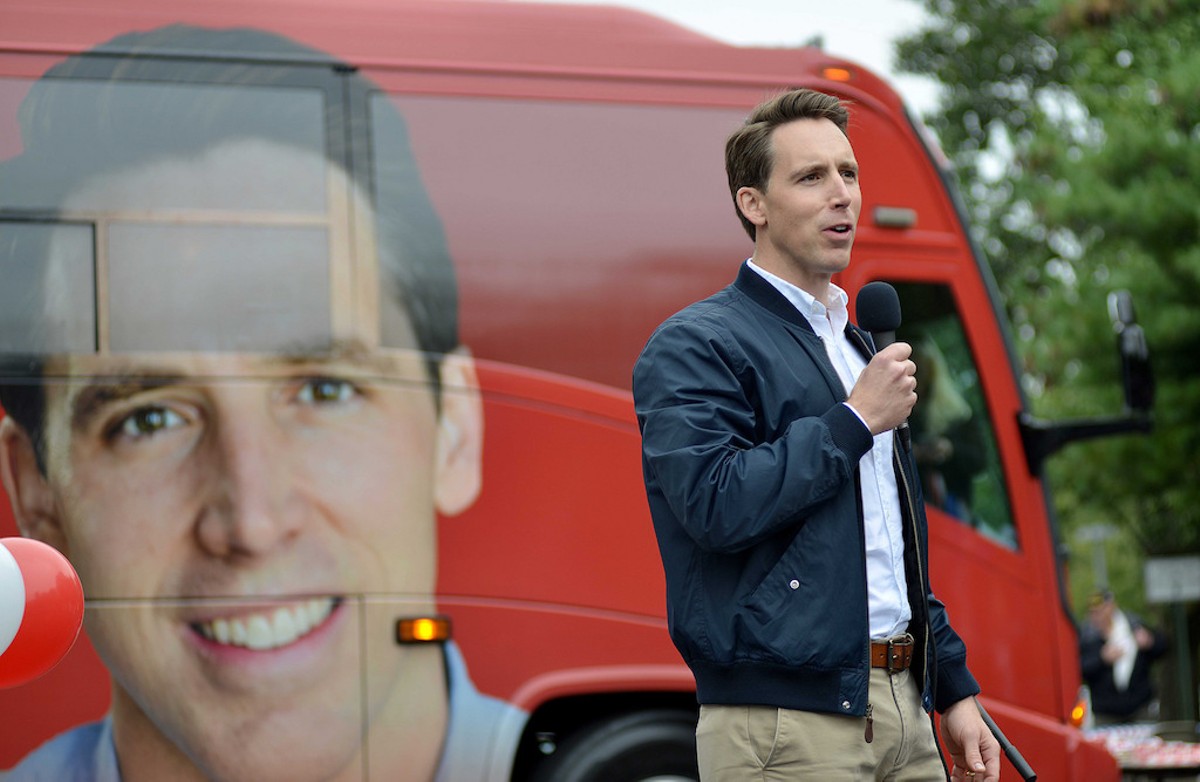 This was the best "St. Jack" could do? TOM HELLAUER
Senator Josh Hawley is rolling.

Barely in office more than a month, Missouri’s junior senator has already learned to channel his inner Trump, grab his Twitter gun and get a-hunting for swamp creatures. And in a moment that must go down as one of the more amusing in modern Missouri political history, Hawley bagged his first prey: Senator Roy Blunt.

Blunt, to his credit, was among a select group of bipartisan members of Congress chosen to provide adult supervision to President Trump in the form of a border-security bill designed to avert another government shutdown. It passed the Senate last Thursday by an overwhelming margin of 83-16.

Hawley was one of just eleven Republicans to vote against Blunt’s bill. Before the ink was dry, he had already issued the following tweet: “I just voted NO on the border spending bill. Doesn’t secure the border, weakens ICE. It’s 1100+ pages and was filed in the dead of night. Only in Washington is this considered normal. This is a stupid way to do business and it’s time to change it.”

“Blunt’s office said it had ‘nothing to add’ when asked about Hawley’s comment,” McClatchy’s D.C. Bureau reported last Thursday.

The hell it didn’t. From Blunt’s perspective, this wasn’t your everyday bill: I’m thinking he considered it quite the achievement.

Blunt was one of just seventeen members of Congress, one of just eight Republicans and one of just four Republican senators behind this “stupid way to do business.” And as a high-ranking member of the Republican leadership, he clearly was one of the most influential participants.

The bipartisan panel toiled under excruciating pressure to pull a political rabbit out of its hat so that the narcissist-in-chief didn’t further damage the republic over his wall — at least for those few fleeting moments of compromise before he tossed red meat to his base by going the “national emergency” route.

Had more Senate Republicans voted like Hawley, that effort would have been remembered as an historic failure and the nation would have been plunged into another senseless shutdown. If I were Roy Blunt, I’d have plenty “to add” the next time I saw Josh Hawley.

But let’s not overlook the splendor of Hawley’s tweet: Like a fine wine, it’s truly something to savor.

And, ah, the substantive analysis. If you really want to inflame someone’s emotions about a piece of legislation you don’t like, tell them it’s 1,100 pages long. (I’ll admit: The passages written in Russian that the White House sent over might have been a tedious read.) But here’s a news flash: Legislation governing a nation of 325 million people on a subject as complex as immigration policy has an irritating tendency to run past 280 characters.

Also, let’s not overlook the reference to the bill having been “filed in the dead of night.” I’ll confess I don’t know when it was time-stamped, but Hawley’s characterization conjures images of someone pulling up in a windowless van and slipping sealed, unmarked envelopes into the halls of Congress as an unsuspecting nation slept.

In reality, the panel’s work was America’s lead news story for many days. Regardless of how one views the final product, the process hardly lacked transparency and thoughtfulness. So, saying “only in Washington is this considered normal … this is a stupid way to do business and we have to change it” makes Hawley seem like a moron.

But there’s a problem with that: Josh Hawley is not a moron.

Josh Hawley is smart. This is a guy with a history degree from Stanford and a law degree from Yale, a former Supreme Court clerk who taught law at the University of Missouri-Columbia before becoming Missouri attorney general, where he toiled for roughly 45 minutes before deciding to run for U.S. Senate.

If you’re stupid and tweet something stupid, that’s one thing. But if you’re smart and you dumb things down to the incredible depth to which Hawley sank here, you’re worse than stupid. You’re a cynic. You’re dishonest.

How ironic it is that one of Hawley’s first political patrons was none other than Senator John “St. Jack” Danforth? Danforth shocked many Republicans by publicly pleading with Hawley to take on Claire McCaskill within a month of Hawley’s first electoral victory. It was a big snub to Danforth’s fellow St. Louisan, Representative Ann Wagner (R-Ballwin), who was actively weighing an entry to that race herself.

It’s notable that Wagner was among 87 Republicans in the House to support the measure that Hawley found so repulsive. But what’s even more interesting is that the bipartisanship that led to this measure was the very essence of Danforth’s being — certainly in his view, at least — throughout his eighteen-year career as a U.S. senator.

I wonder what St. Jack thinks about Hawley now taking such mortal offense at the scourge of bipartisanship. Or the way Hawley grovels for Trump, who Danforth savaged in 2017 as “the most divisive president in our history.”

Don’t hold your breath waiting for Danforth or other traditional Republicans to grow the cojones to call out Hawley as an extremist demagogue on the issue of immigration. But that’s exactly what he is. In fairness, as a candidate Hawley didn’t hide his hard-line immigration views. Last June, he defended Trump’s immoral policy of separating children from their parents at the border: “It is an entirely preventable tragedy: Don’t cross the border illegally and this won’t happen.” Hawley also wouldn’t respond to media requests about DREAMers or whether people accused of illegal border crossing were entitled to due-process rights. It isn’t shocking that he’s no progressive on the subject.

But even accepting that Trump-base Missourians might be riled up about caravans and the like, Hawley’s bland persona belied just how nasty he can be on the subject. He proved that last week, at the expense of Blunt, among others.

Now that we have the full picture, if Hawley ever runs for state office again in Missouri, perhaps he’ll campaign on building a wall on our state’s southern border, with Arkansas paying for it. That’ll keep us safe from “those people,” which might not be a bad thing. You see, Hawley’s bio says he was born in Arkansas, in a town called Springdale.

Missouri would be better off if he had stayed there.