Imagine a night at the ballet with no dancing or music 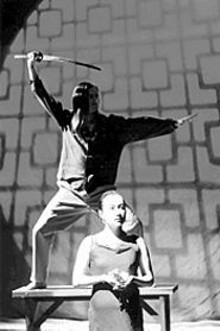 Translation is hard; two translations are even more difficult. Four Modern Noh Plays is Yukio Mishima's attempt to translate an ancient form of Japanese dance-drama into modern settings and language. Mishima's scripts then underwent a second translation into English and are now being staged by (Mostly) Harmless Theatre. The plays are set in a vaguely recognizable "modern Japan," but the unfamiliar legends of Prince Genji and Ono no Komachi don't resonate with American audiences as they would in their native land. Director Robert Neblett attempts to remedy this through extensive program notes, but the result is a production that is more of an academic exercise than a satisfying evening of theater.

Many Eastern performance disciplines (Kabuki, Noh, Butoh, Suzuki) are extremely image-oriented. Story is told through movement, character is revealed in a gesture and words are often irrelevant -- in contrast to classical Western drama, which tends to rely on language as the primary conveyor of meaning. In this production, lighting designer Glenn Dunn and scene designer Bruce Bergner work within the original intentions of Noh drama, creating some stunning visual moments. Bergner combines modern pipes with flowing silky white cloth to create everything from laurel trees to sails; Dunn's lighting uses shadows and scrims to make characters appear and disappear as if by magic.

The imaginative visuals, however, are not matched in language or performance style. Classical Japanese Noh drama is, according to the program notes, "as strictly disciplined an art form as opera or ballet." Here is one of the production's most perplexing problems: these plays have done away with the discipline and dance -- leaving only thinly drawn characters and lots of vaguely dramatic language. Imagine a night at the ballet with no dancing or music, where the story is told with words instead. Neblett inserts some movement interludes which are often more interesting than the plays themselves. The evening begins with a stylized dance with swords performed by Tomoko Kamimura and David Webb. The music, lighting and movement combine to create an astonishing opening moment, but this moment is forgotten when the actors begin to speak the unfortunately bland dialogue.

Only one of the four plays presented has enough theatrical elements to hold the audience's interest. The Lady Aoi, translated by Donald Keene, has a kind of Twilight Zone appeal as the "living ghost" of Mrs. Rokujo comes to torment the hospitalized wife of Hikaru, a former lover. Rokujo is played with a cool intensity by Rosemary Christian, and as she draws Hikaru back into memories of their love affair, the set is transformed into a sailboat, complete with wind billowing the sails and sunlight passing through the clouds. Behind the sails, Hikaru's wife appears in shadow, calling to her husband, occasionally reaching through the memory with an outstretched hand. But even these provocative images are not enough to rescue the play from its melodramatic moments and stilted dialogue.

Other fine performances are also drowned in the sea of unremarkable language and endless philosophical discussions of the nature of love, pleasure and regret. Corey Jones, in Yuya, plays a powerful rich man whose view of the world is challenged by a sly mistress. Erin Layton and Dan Shea each give interesting interpretations of characters challenged by love in The Damask Drum. The multi-ethnic cast is visually appealing in this East-meets-West theatrical attempt, but stylistically the production sinks somewhere between the continents. Neblett seems drawn to the visually provocative theater of the East and of postmodern artists like Robert Wilson -- indeed, he pays homage to Wilson by titling his interludes "knee plays" (a phrase created by Wilson). But Neblett's visuals are only shadows of what they imitate. The often unremarkable images -- two women twirling umbrellas, for example -- don't go far enough, and without poetic language or believable dialogue, the production ends up floundering between word and movement, in search of style and meaning.