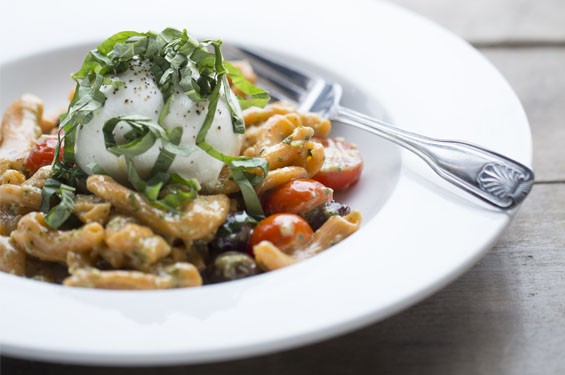 Torchio with pesto and burrata.

Katie's Pizza & Pasta, the latest feather in chef Katie Lee's cappello, brings her Italian style of dining to Rock Hill in the form of a shabby-chic osteria. Devotees of her first restaurant, Katie's Pizzeria Cafe in Clayton, already know this: Lee raised the osteria's launch money with a Kickstarter campaign. Judging from the overwhelming response — she exceeded her $40,000 funding goal with donations ranging from $5 to $10,000 — Lee already has the recipe for success.

The weekend of my visit, it seemed as if every single one of her Kickstarter backers (and their legion of children) were packed into the smallish restaurant, vying for tables and bar space as early as 5:30 p.m. This would have been infinitely more annoying were the place not so darn charming. One has to hand it to Lee — her eye for design is so acute that she was able to take a cookie-cutter storefront in a boring suburban strip mall and turn it into a cozy dining spot. Vintage tables and chairs dot the shotgun-style dining room, which gets its subdued warm glow from several mismatched light fixtures. The wooden bar is bookended by two floor-to-ceiling "living walls" sprouting green plants. Classic Italian films play from a humongous television that hangs behind the bar, and the huge open kitchen imbues the scene with energy.

Lee's menu draws inspiration from her time abroad in Florence, Italy, though one of the better appetizers came from closer to home. The homemade toasted ravioli was a decadent vegetarian take on the St. Louis classic. They had a crispy exterior, and the filling of artichoke hearts, feta cheese and spicy red pepper created a nice, creamy heat. The dipping sauce, a simple housemade pesto, was spot-on. Another hit was a salad of prawns and citrus that showcased the perfectly marinated and seared shellfish against a backdrop of grapefruit segments, arugula, fennel, olives and pistachios. The texture on the prawns was superb.

But two otherwise delicious appetizers suffered similar problems. The beef and pine nut Neopolitan meatballs were straightforward, tender and tasty. I must commend Katie's on its ability to capture the simplicity of Neopolitan sauce: nothing but tomatoes, olive oil and salt. But I found myself wanting to sop up the sauce with crusty bread, which was not offered. Katie's charges for bread service — a rosemary and olive oil flatbread — and while I don't have a problem with this on principle, in this instance a few gratis pieces would have been nice. This was even more annoying with the burrata, a cream-filled mozzarella, served with a variety of accoutrements. (The menu calls it "house burrata" which we discovered does not mean "housemade" — it actually comes from a cheesemaker on the Hill.) We chose two different presentations, one with prosciutto and fig mostarda, and the other with soppressatta and olives. The luscious cheese oozed over the plate, as it should. But was I really supposed to lick the burrata off my knife and fork?

The original Katie's made its name with its pizza. The new Katie's, however, has some catching up to do. Overall, the crust is fair. I appreciate that it is handmade, but it's a touch dense and does not consistently come out with the characteristic dark blister of a wood-fired pie. The fig and squash, a tasty presentation of butternut squash, black mission figs, prosciutto and goat cheese drizzled with balsamic vinegar, was the better of the two pies we tried. The Margherita, however, missed the mark, its mediocre crust topped with bland cheese and dotted with a couple of basil leaves and a few grape tomatoes. The overall effect was boring and tasteless. (A traditionally sauced version is also available.) For Katie's to falter on its execution of such a quintessential type of pizza was a big disappointment.

The pastas were also just OK. The creste (named for the pasta's rooster-crest shape) was tossed with a blend of forest mushrooms and arugula in a light garlic broth. The pasta was topped with a dollop of mascarpone cheese, which I assume was supposed to mix into the broth to form a creamy sauce, although it never quite fully incorporated. The overall flavor of the dish was good, but it needed to be better seasoned. The bucatini with arugula, however, was a mess. The dish was a take on carbonara with pancetta and English peas tossed with a farm egg that served as the sauce. The effect of the egg made the noodles gluey, and the pancetta was so overcooked it was difficult to swallow.

We fared much better on dessert. Cannolis were made to order with warmed blood-orange mascarpone filling. The made-from-scratch doughnut holes were also fantastic, and the salted-caramel ice cream paired nicely. The doughnuts would have paired even better with an espresso — surprisingly, Katie's doesn't offer this most-Italian way to end a meal.

Lee clearly has quite a following, and her new location seems to be booming. I'm not sure why its legions of fans think it's the best thing west of the Tyrrhenian Sea, but it's a cute place with OK food, and it offers St. Louis Italian dining that isn't smothered in red sauce and Provel cheese. But whether this is enough to warrant cutting a $10,000 check to a Kickstarter is questionable.

Jump to comments
« Gamlin Whiskey House Is a Warm, Welcome Retreat   |   Bud's Smokehouse & Grill serves great barbecue, but can it break the curse? »