Les Savy Fav with the Apes and Dirt Nap 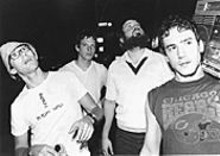 Les Savy Fav (pictured) and the Apes are on a mission to reclaim art rock from the stuffy pretensions of turgid rock librettists and overambitious "conceptual rock" musicians. Like fellow one-time Gotham residents the Talking Heads, Les Savy Fav enrich their compositions with an offbeat sense of humor and an aesthetic somewhere between noir B-movie and '80s punk iconoclasm, hauntingly pitched and perfectly pointed. Labelmates the Apes are even more strident with their guitarless organ-led throb, as if some Stooges took Arthur Brown's "Fire" for a Black Sabbath song.Les Savy Fav began in 1995, while its members were studying art at the Rhode Island School of Design. "I went from postmodern protégé to postmodern passé and retched from the get-go," complains singer Tim Harrington on the title track from last year's EP Rome (Written Upside Down); this world-weary, end-of-the-empire tone informs nearly every song. Les Savy Fav's latest album, Go Forth, builds even stronger pop edifices around typically unusual topics, such as fondly remembered hostage incidents ("Adopduction") and hitchhiking on the autobahn ("Disco Drive").

With a different style but similar concerns, the Apes, a Washington, D.C.-based four-piece, meld garage rock's dank, organ-fed claustrophobia with a burbling '70s hard-rock low-end murk. Lead singer Paul Weil's primordial wail is matched live by his free-range kineticism; he paces the stage like a caged animal, underscoring the appropriateness of the band's name.