These days, spaces once reserved for solo performers are being crammed with a wider array of sounds

By Steve Pick [email protected]
click to flip through (2) 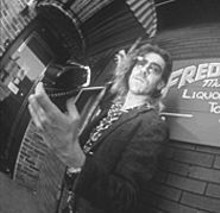 Customers are few this evening at Café Samadhi in downtown Webster Groves. In one cozy booth, a pair of teenage girls drink hot chocolate and giggle. A bearded man and his date sit behind them, discussing the book he is holding. Another woman lounges alone, sipping a soy-milk latte.

Josh Wiese picks at his acoustic guitar at the front of the café, the big window facing Big Bend behind him, and bellows songs of anguish, murder and romantic disappointment. People clap when he's done, but only a half-dozen are paying much attention. Wiese normally leads the rock band Rodeo Soul, but tonight he's having fun trying out songs he doesn't get to play too often. In the middle of one song, two older couples enter the café and pass him; he says, "Hello," without stopping. Tomorrow night, this space will be occupied by experimental art-rocker Tory Starbuck. In past weeks, such rock bands as the Unstrung have been here. Until recently, the room was called Pony Espresso; the new name accompanies a new, more expansive music policy.

These days in St. Louis, if you want to see a local rock band play its own music, a host of tiny venues once reserved for solo performers -- Samadhi, Frederick's Music Lounge, Sally T's and Kennealy's among them -- have opened their doors to louder sounds. With tiny PA systems and small or no cover charges, little places such as Café Samadhi are transforming the scene, and the notion of rock bands only playing "rock clubs" seems to be melting away.

Face it: Rock music doesn't always draw the big crowds in 2001, especially not rock music played by local bands performing original music. Although more creative musicians are operating in St. Louis than has been the case in maybe 20 years, few consistently draw an audience large enough to fill Mississippi Nights, the Pageant or even the Hi-Pointe. In response, a number of clubs with a 100-person capacity have opened their doors to more creative booking.

"I think being in such close proximity to the audience does give us a better chance to connect to them," says John Kosla, drummer of the Civil Tones, who have established a nearly regular rotation at the Famous Bar, a shotgun room located on Chippewa a few blocks west of the location of the old Southtown Famous-Barr. "I mean, they can actually talk to us when we're playing -- or dance with whoever is out front."

Walk into the Famous Bar and you might be greeted by a well-dressed young man who seems to bow as he asks you for a small cover charge. Kosla's drum kit is pushed against the window facing the street, with Robin Allen and Dave Hilditch wielding guitar and bass, respectively, in front of him. That's as much room as the "stage" allows -- the small space looks as if it was designed not for musicians but for window displays. The fourth member of the Civil Tones, John Holt, must set his organ and other keyboards at an angle on the floor in front of his bandmates. And when regular guest vocalist Martini LaBess (who looks suspiciously like Patti Loth of Ouija) waltzes up to belt "Goldfinger" or "Secret Agent Man," she grabs a microphone and stands in front of the organ. Unless you're very tall, or standing directly in front of her, you don't stand a chance of knowing what she looks like while she sings. She's not even on a stage, and when the bar gets crowded, as it does on weekends, the people don't look oo worried about the band; live music is an accompaniment to the serious action of flirting and drinking.

"A small venue is almost always easier to play in, soundwise," says Kip Loui, guitarist and singer for the Rockhouse Ramblers and Belle Star, two bands that have played most of the venues in the city at one time or another. "There's less space to fill, so you don't have to turn up as loud, which means people can actually hear the nuances of the music for a change.

"There's more immediate connection with the crowd at a small club," he continues. "It's real hard to ignore the happy drunk guy 5 feet from you screaming. It's nice because it's so immediate. There's no wall between you and the audience. But a smaller venue also means smaller exposure, too, of course. So it's a tradeoff."

Music fans get their own bang for the buck. It's fun to see a band in a small club. There's a feeling of comfort, as if somebody has invited you into his or her living room to play some songs for you -- only, instead of spinning records, your friend is accompanied by a full band.

Sally T's is located in St. Peters' Old Town area, a two-block strip with a small-town feel, on Main Street just west of the Mid Rivers Mall Drive exit from I-70. By day, Sally's is a restaurant; its décor mixes the pseudo-hippie with miscellaneous 20th-century detritus. Patrons get alcohol from a self-serve case, something one doesn't see often in a bar, and the beer taps behind the bar stick out of a 50-year-old Frigidaire.

"This is our first gig," announces the guitarist/vocalist for Doze Mary Pool, "so if we suck, we have an excuse." The four musicians, situated on a stage jutting out of the front of the room, are playing a trance-inducing style. A terrific, propulsive rhythm section builds a foundation that supports the guitar and keyboard's minimalist, melodic ideas. Seated at the dozen-or-so tables in front of the stage, 20-somethings talk, laugh, drink beer and clap in between the group's long songs. The band members have parents and other relatives scattered around the room as well. You can feel the camaraderie.

Although these clubs all have their charms, most musicians seem to hold one room in highest regard. "Frederick's is the best place to play right now," says Dave Collett of the Unstrung. "Frederick's is just one of those places that, just by walking in, you know that you're somewhere special -- sort of like Jackson Square in New Orleans. Performers automatically connect with the audience in such a way it's almost impossible to not play the best show possible."

Tonight, the members of the Rockhouse Ramblers huddle together in front of the drum set. Because of the tiny size of the stage, huddling doesn't require much movement; each of the four musicians takes just two steps toward centerstage.

Frederick's is not your normal rock club. It's small, of course, and packed with a smorgasbord of decorations, from strange, amateurish paintings to a collection of women's underwear hanging from the ceiling. The beer of choice at Frederick's is Stag; it's cheap, and it's not something you find just anywhere. In a brilliant twist, patrons don't normally pay to enter Frederick's; instead, an exit fee is requested, allowing the crowd to decide after the fact whether the experience has been worth the money.

For almost a year, Frederick's has been squeezing rock bands onto that tiny stage and filling up the space on the floor with an assortment of hepsters young and old. "Customer response was favorable as soon as we reopened the lounge last July," explains proprietor Fred Friction. "We immediately began to attract a growing number of well-behaved alcoholics and sociable music fans. We'll bring in anything from angry feminist rockers to avant-garde sonic experiments and all matter of rock & roll in between. If it looks honest and smells real, we're interested."

Jump to comments
Sound of Satellites »