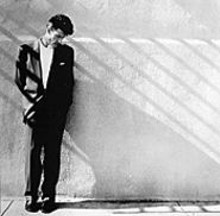 Ironic distance is a good weapon in the arsenal of a songwriter, but when it's used too much, listeners develop some pretty good defenses. Lyle Lovett has mastered irony to such an extent during his career that it's now a reflexive habit to be suspicious of anything he delivers. Does it mean exactly what it says, or is there something else we're supposed to think about this song?

For the most part, this isn't that serious of a problem. On his latest album, My Baby Don't Tolerate, Lovett's tales of marital battles and traveling on down the highway are pretty easy to understand. You take the stories at face value, and then you appreciate the ironic commentary. Take the title song, for instance: First the narrator is squirming because his wife is pissed off he came home so late. Then you get the payoff verse: "Now a smaller, more ordinary man/Might not appreciate the guidance of a good woman/Who truly loves him."

Of course, Lovett has written much more clever songs than the ones on this album, which was his first collection of all-original material in seven years when it came out last summer. Somewhere along the line, his sharp observations turned into rehashes as he tried to meet expectations. The music is still good, even though it's settled into the hard-swinging Large Band sound that he's had since at least his third album. You can't blame the guy for trying to find a way to push things outside his self-imposed envelope.

But that's where the confusion comes in -- because the last two songs on Tolerate are straightforward gospel songs, aided and abetted by African-American vocal choirs. In the past Lovett has treated religion with irony; now, when he appears to be singing it like he believes it, the listener tends to look for what he thinks should be funny. It's almost as confusing as the fact that, after all this, Lyle Lovett's concerts remain exceptional events, full of musical thrills that don't leave enough time for worrying about if he means it, man.