Made From Scratch: Pretty Lights takes a new approach on latest, A Color Map of the Sun 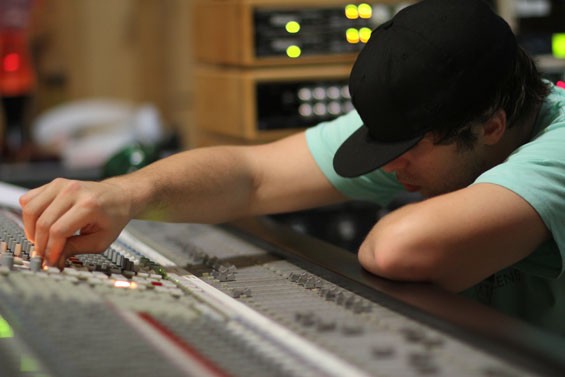 Derek Vincent Smith a.k.a Pretty Lights at the mixing board

Made From Scratch: Pretty Lights takes a new approach on latest, A Color Map of the Sun

As my career was having success and I continued to grow, I wanted to invest that success into a more challenging project," declares Derek Vincent Smith, the mastermind producer behind Pretty Lights, about his latest album, A Color Map of the Sun. "And one day it all made sense: I needed to maintain my style and sound but go back five steps and make everything from scratch in the exact way it was done in those time periods."

This wasn't merely an epiphany for Smith, whose sound was founded on sampling everything from hip-hop and jazz to funk and soul, it was a massive paradigm shift. Each of Pretty Lights' past releases were culled from hundreds, if not thousands, of samples pulled from years and years of crate-digging. "As a sample-based producer," he says, "I don't just sample one track, but ten, twenty or thirty samples in one song."

All of his past collages were layered creations, with triggered samples painting complex pictures featuring smooth drum breaks, alluring vocal drops and sturdy bass melodies. On the new album, meanwhile, Smith set about creating his own sounds with session musicians, combing the country in search of instrumentalists he thought would be able to deliver the precise sounds he wanted to work with. "I wanted to have recordings that sounded like they were from the classical collection, like they were from '70s Mississippi blues recordings," he explains. "When you envision something and embark on it, as is true with any artist, the final project is never what you thought it would be. But I wanted to purposefully take an extreme turn from that style and really turn it into something else."

And that called for defying convention a bit. "I was working with all these really talented musicians who are used to coming into sessions and getting handed a sheet of paper with the music on it," Smith recalls of early recording sessions that took him from New Orleans to New York, where he worked with former Pretty Lights drummer and current Pretty Lights Music artist Adam Deitch. "But I don't work that way, and I don't want to work that way."

He also broke with convention by assembling all of the musicians in one room to record. He wanted to capture the true ambient sounds of the other instruments, and, just as he had hoped, each microphone ended up picking up the ambient reverb, giving the songs a "simple, dirty, dusty, old-school, funky distortion sound," as he puts it. The idea was to explore and bring a whole new approach to making dance music. "I want to have an effect on the evolution and direction of what is fresh," Smith declares. "I wanted to step back from the super-banging-all-the-time speeds and focus on really good-sounding, pleasing-to-the-ear sounds." he explains. "As music evolves, I see some real fans who really just like good music no matter what it is. And that's where I'm at: I love a hot dubstep track; I love a hot country track."

While Smith doesn't necessarily draw this line himself, it seems as though the inspiration for this shift is directly related to his involvement with the 2011 Grammy film project Re:Generation, which paired the Pretty Lights maestro with Dr. Ralph Stanley and LeAnn Rimes for an exclusive collaboration. In the film, Smith admitted his lack of enthusiasm for the endeavor, but the experience appears to have piqued his interest in getting back to the roots of production.

The Re:Generation sessions influenced the new album through the exploration of tape-reel recordings and the use of era-specific microphones and tools, among other things. Smith realized that he could create the sounds he had spent countless hours searching for in record stores. "I had to research with the engineers about what microphones were used in certain periods and work with the analog hardware by the decade for the style that I was going for," he says.

The extra effort paid off: A Color Map of the Sun is a seamless outing that essentially offers a panoramic snapshot of the past fifty years of music, with Smith spotlighting different eras. More than a mere directional shift, the album ultimately reflects the ongoing evolution of Smith as an artist.

Smith built Pretty Lights from the ground up with ambition and steadfast determination, expanding his fan base organically by giving his music away for free on his website, then constantly playing shows with his childhood friend, drummer Cory Eberhard.

But even while he was gaining all that momentum, Smith still had his doubts. "In the beginning, running through a lot of the adventure, there were a lot of ups and downs where I would tell myself it was awesome, or maybe I would need to focus more on making it harder," he says. "I think I would go through waves of going through the hottest shit ever to thinking a song I've heard so many times is not good enough."

Despite his success, this sort of introspection continues for Smith, who has grown to be an influential force in the global dance community, one who has sold out nearly all of his shows in the past three years and has been tapped for choice headlining spots at many of the country's biggest music festivals. But the self-scrutiny seems to be precisely what continues to drive him. "When I can wrap my head around the fact that this isn't the make-or-break album for me in my life or for my touring career — when I really wrapped my head around that, I became 200 percent confident about my style and the nature of this album," he concludes.

Ah, yes, the nature of this album. That prompts an obvious question, considering how the music-making process has progressed: Will the Pretty Lights live show follow suit? Might Smith bring musicians into the equation at some point? "It's always been part of my vision," he maintains, "that all of these songs are songs I can perform with a band."

Jump to comments
« The Root of All Anger: Comedian Lewis Black speaks softly about yelling   |   The Second Coming of Del-Lords: The gods of Americana are back at it »